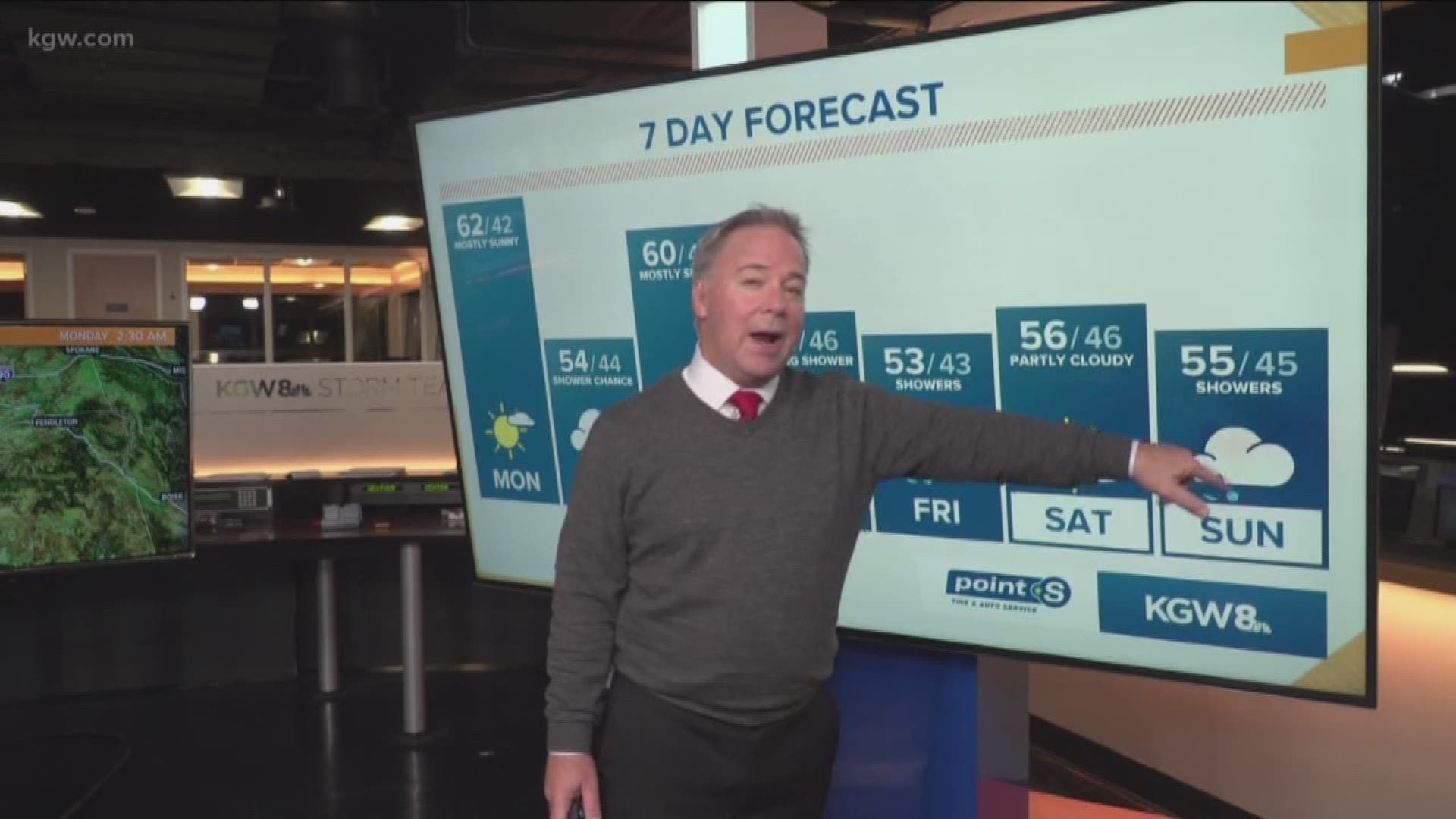 Here is the latest timing to our weather shift into a wet to above normal rainfall pattern for the coming six weeks.  Clearly our dry November is slowly breaking down into increasing rainy days, but the active jet stream pattern I am tracking has been delayed until the final week of November.

I expect classic wet Northwest weather to take hold as early as November 22 and continue through the Thanksgiving weekend.  If forecast models are true, our region will be in the jet stream track, receiving several shots of moderate to heavy rainfall as Cascade snow levels lower to 3,000 feet at times, bringing good snow to Mt. Hood resorts.

Early Monday morning, KGW meteorologist Rod Hill made a statement while delivering the forecast on TV that perked up some ears in the KGW newsroom.

"Sunday's rain could kick off a return to a wet weather pattern for about six weeks," Hill said.

KGW's Nina Mehlhaf had Hill stop by during Monday's online broadcast of Sunrise Extra to get the details. Hill said models show that starting Sunday and through the entire month of December, the Portland metro area is looking at above-average rainfall.

Hill said the metro area had a wetter-than-normal September, but October was dry with about 50% of the normal rainfall for the month. "It really hasn't rained significantly since Oct. 22," Hill said. He said the dry weather pattern looks like it's about turn on a dime starting Sunday.

"I'm not saying, 'This Sunday will be Day 1 of 20 days and nights of rain!,'" Hill said. "I'm simply saying that starting Sunday, if you look from Sunday through the entire month of December coming up, that five- to six-week period looks to be back to an above-normal rainfall pattern."

And then Rod brought up the magic word that makes Portland excited and nervous all at once: Snow.

Hill said models show two big snow events the first 10 days of December, where snow levels could drop to 2,000 feet or lower, which could bring several feet of snow to the mountains. That could be followed by a weather pattern that holds that snow and builds on it.

"That would set the stage for wonderful skiing and snowboarding setting up going into mid-December for the holiday break, which would be huge," Hill said.

Hill said one of the events also shows the possibility of snow levels dropping close to the valley floor over Thanksgiving weekend.

"One of those events is kind of hit-and-miss where you wonder if the snow levels could be close to some of the metro hills around town, and that's over Thanksgiving weekend, which looks really wet right now," he said.

Hill said one of the things that showed up in the data set he ran for his Winter Outlook were several Novembers with snow in Portland.

"We're talking an inch or two, that kind of thing, but we don't get that very often," he said. "Could we get something maybe the last five days of November? We'll see."

Hill's Winter Outlook also reported that January holds a promise of snow, with the potential for a storm that could drop as much as eight inches of snow on the metro area.