The third person killed has been identified as 33-year-old Molly Elisabeth Hubbard of Minneapolis, Minnesota. 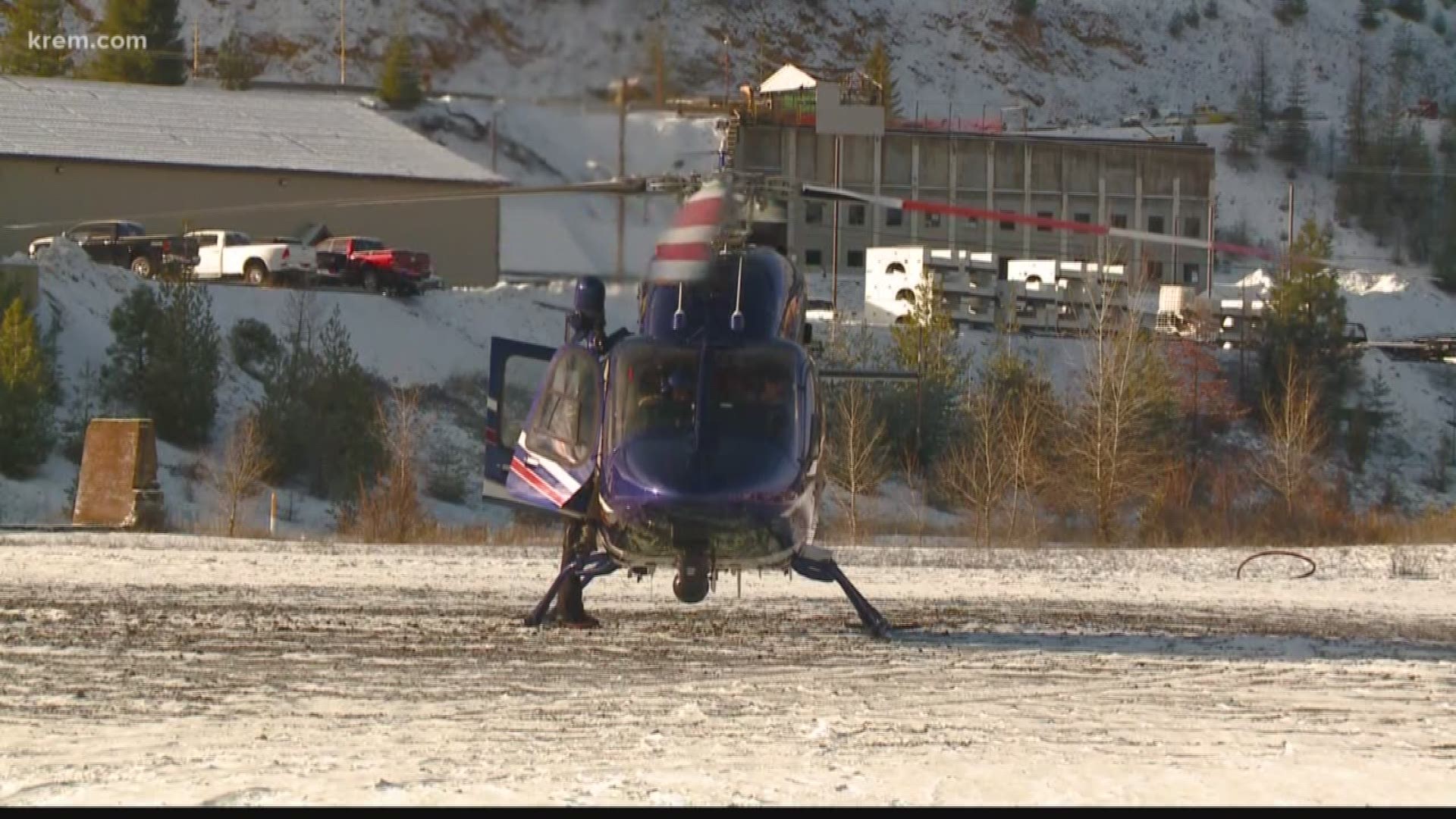 KELLOGG, Idaho — The rescue crew that located Molly Elisabeth Hubbard, the third victim killed in the Silver Mountain avalanche, said she was buried under approximately 20 feet of snow when found.

Hubbard, a 33-year-old from Minneapolis, was recovered by search crews on Thursday.

According to the Two Bear Air rescue team, Hubbard was buried under approximately 20 feet of snow. The helicopter was able to find Hubbard because she was wearing a Recco device, a piece of equipment that is able to be detected by a Recco detector even while buried.

Two Bear Air, based out of Montana, said it was it had used the device and successfully found someone within minutes.

The Oregon Health and Sciences University, where Hubbard was a professor and surgeon, released a statement about her passing on Friday. The statement came from Nathan Selden, the university's Chair of the Department of Neurosurgery.

“Molly Hubbard was a superlative physician and surgeon with exceptional judgment, technical skills and deep compassion for her patients and colleagues. She was also an extraordinary human being who was loved and valued by all who knew her. Molly’s loss is unfathomable to her friends, her family, our community at OHSU, and to myself as her mentor. We will do our best to honor her extraordinary character," the statement reads.

Silver Mountain reopened the ski area to guests for the first time in two days on Friday. The resort had opened runs at a delayed time of 9:15 a.m. Chair 4, which is closest to the Wardner Peak section of the ski area, and nearby runs were closed, however.

Guests began lining up early to ride Silver's slopes since the avalanche forced the resort to close earlier this week.

“We ski Wardner Peak all the time. So it was pretty emotionally impacting to the whole community," said Mallory Phillips, a Kellogg native who arrived to ski on Friday. Phillips, who fought back tears while speaking with KREM, said that the even rocked the small Kellogg community.

Tom Wagemann, a snowboarder from Spokane, said that Friday marked the beginning of a healing process for all skiers and snowboarders who frequent Silver. “You have to move on. The past is the past and moving on – you get over the hurt and the sorrow of what’s going on," said Wagemann.

“It just feels heavy. But you’ve got to keep going," added Phillips. "[The victims] died doing what they love.”

Silver had previously planned a promotion dubbed "Jackass Day" at the resort, which paid homage to the ski area's more than 50 year history in Kellogg and its original name of Jackass Ski Bowl. The resort was originally selling "retro-priced" lift tickets at $12 for Friday only. While the resort honored the discounted tickets, other planned Jackass Day events including fireworks and a rail jam were canceled due to the recent tragedy.

It wasn't immediately clear when Chair 4 or the Wardner Peak section of the mountain would reopen. Resort officials did not return multiple messages seeking comment regarding the avalanche.

Search and rescue crews recovered a third body on Thursday from the avalanche.

KREM's Taylor Viydo said Silver Mountain confirmed that the body is the person who was reported missing on Wednesday. This brings the total number of dead in the avalanche up to three.

This comes after a two-day search for a missing skier after a family member expressed concerns to Silver Mountain on Wednesday morning.

According to KREM's Taylor Viydo, the Two Bear Air helicopter confirmed that a person was found buried under the snow at about 12:45 p.m. on Thursday. The person was located with a Recco device.

Previously, two dead and four injured people were recovered from the avalanche.

The two men who were killed in the avalanche on Silver Mountain are from Spokane County.

"We would like to thank everyone for their patience with the release of the victims’ names as it is important to allow family the time to make proper notifications to extended family and friends," SCSO wrote in a statement on Thursday.

The avalanche occurred on the peak's 16 to 1 run, according to Silver Mountain.

Four other people were injured in the avalanche. The resort received information at about 7 a.m. on Wednesday morning that another skier was unaccounted for and search efforts restarted.

Video below is from the helicopter that helped find the final person in the avalanche.

The resort initially reported that five people were injured but amended the number during a press conference on Wednesday.

SCSO deputies said on Thursday that 120 search and rescue responders, including a helicopter, were searching for the missing skier on Thursday.

The ski area is closed on Thursday as search and rescue crews have meticulously combed the area for any signs of the person.

Search and rescue crews suspended their search for the missing person for the rest of the night on Wednesday, but KREM's Nicole Hernandez said they headed back up the mountain to continue the search at about 7 a.m. on Thursday.

The missing person was skiing at Silver Mountain on Tuesday during the time of the avalanche, according to a Facebook post.

Silver Mountain confirmed to KREM on Wednesday that the ski area was open and inbounds.

Silver Mountain General Manager Jeff Colburn said in the press conference that about 60 people are helping in the search and rescue effort, including three to four rescue dogs, search and rescue personnel from Kootenai and Shoshone Counties, and crews from nearby resorts.

Colburn said the avalanche happened on the '16 to 1' run off the the Chair 4 Basin.

In a press release, Silver Mountain said the avalanche took place near the Wardner Peak area, which had been closed until Tuesday morning due to a lack of snow. The area then received 16 inches of snow in the 24 hours before the avalanche and avalanche control work was done in the morning before the mountain opened.

Shoshone County Sheriff Mike Gunderson said at the press conference that at this time they believe only one person remains missing.

Gunderson said search efforts going forward are highly dependent on the personnel working on the mountain, especially when it comes to keeping them safe.

"We’ve been rotating the personnel in and out, so we have to also take into consideration for their safety as well," Gunderson said. "I would assume that sometime this evening the search will end like it did last night, and then, depending on what we find at the time, when we will continue tomorrow if we need to.”

When asked if authorities planned on sending out a message asking for any information on other missing people, Gunderson said he believed the media coverage the story has received should have informed anyone who thinks they know someone missing near the mountain.

Gunderson also said they weren't asking people to avoid the mountain completely, as things such as a restaurant were still open. People do need to avoid the search area.

Gunderson also asked people to be careful, use proper tracking equipment and to let friends and family know where they are when going on backcountry runs.

The Idaho Panhandle Avalanche Center will be conducting an investigation into what caused the avalanche and the area around Wardner Peak will be closed until further notice, according to Silver Mountain.

According to a Facebook post by Silver Mountain, at least two people involved in Tuesday's avalanche died and four were rescued with injuries.

The Wardner Peak run is listed as closed on Silver Mountain website.

"This evening, Silver Mountain Ski Patrol located an additional person buried in the avalanche. The skier was extricated and has been transported to Shoshone Medical Center. Indications are all skiers are now accounted for. Silver Mountain extends our deepest condolences to everyone affected, and out of respect to the families, no further comments will be released at this time," Silver Mountain wrote on Facebook on Tuesday.

Silver Mountain posted on their Facebook earlier on Tuesday that one person died in the avalanche before a second death was confirmed.

"At this time Silver Mountain can confirm there was one fatality and five others involved who were rescued with minor injuries. The search is currently continuing with probes and rescue dogs," the post reads. "The staff at Silver Mountain extend their deepest sympathies to the family of the individual. Out of respect of the person’s family and their privacy, no further details will be released at this time."

Crews said at 8 p.m. on Tuesday that they were done searching for the night, but Silver Mountain officials said they believe all people in the area have been found.

Bill Fuzak, a man from Colbert, was one of the people caught in the avalanche and spoke with KREM's Amanda Roley to describe what happened and how he was rescued.

Fuzak thanked the rescue crews and said he lived thanks to an air pocket he had punched in the snow in between two slides in the avalanche.

"When they unburied me after 50 minutes, I shouldn’t have been alive. I got lucky because I had the air pocket that I made. But without their efforts, none of us would have made it, except for the one that was partially buried," Fuzak said.

He said he was unconscious and his lips had turned blue when rescuers found him. The first person he saw after being uncovered was a ski patroller he knew.

Fuzak said two people had went down the run, which he had done hundreds of times, before the group that got caught in the avalanche without any troubles. But when his group went down, everything began making a cracking sound and snow began to slide.

Some witnesses said they saw two skiers caught in the avalanche who were alive and well, while another one was blue in the face. The skiers told Viydo responders started chest compressions on the victim before taking him away on a stretcher.

In the small town of Kellogg, the winter sports community and the town's community are very close-knit.

This means that the sadness felt by those on the mountain has extended throughout the town.

"We're all connected here pretty closely, you know? If we don't know the people who were involved, we know someone who does," said Mike Weiser, who owns Dirty Treads Bike and Coffee Shop in Kellogg.

He was on the mountain when the avalanche happened but he had just went down when it started. He described the mood as "very solemn."

Dirty Treads is one of many businesses offering free coffee to ski patrol members and first responders. Weiser said he wants his shop to be a place where people can meet and reflect on what happened.

"It was a glorious ending fore some, but that's sad," Weiser said.

Silver Mountain Ski Patrol responded to the area after the avalanche was reported and immediately began searching for guests.

The Coeur d'Alene Fire Department said on Facebook that its K-9 Team was also sent to the avalanche area.

Jeff Thompson, who works for the Idaho Panhandle Avalanche Center, and avalanche rescue dog Murphy were dispatched on Tuesday.

Annie also works as an avalanche rescue dog on Schweitzer Mountain in Sandpoint.

Thompson told KREM on Wednesday that he and Annie are going back up the mountain to assess the snow and help in any way they can.

The Shoshone County Sheriff's Office said on Facebook that they received a report of what could be up to three separate avalanches on the mountain just after 11 a.m.

KREM's Taylor Viydo said the Silver Mountain gondola appeared to be running as normal from the base of the resort when he arrived.