There are multiple amazing wildlife shows at wildlife refuges across the Willamette Valley. 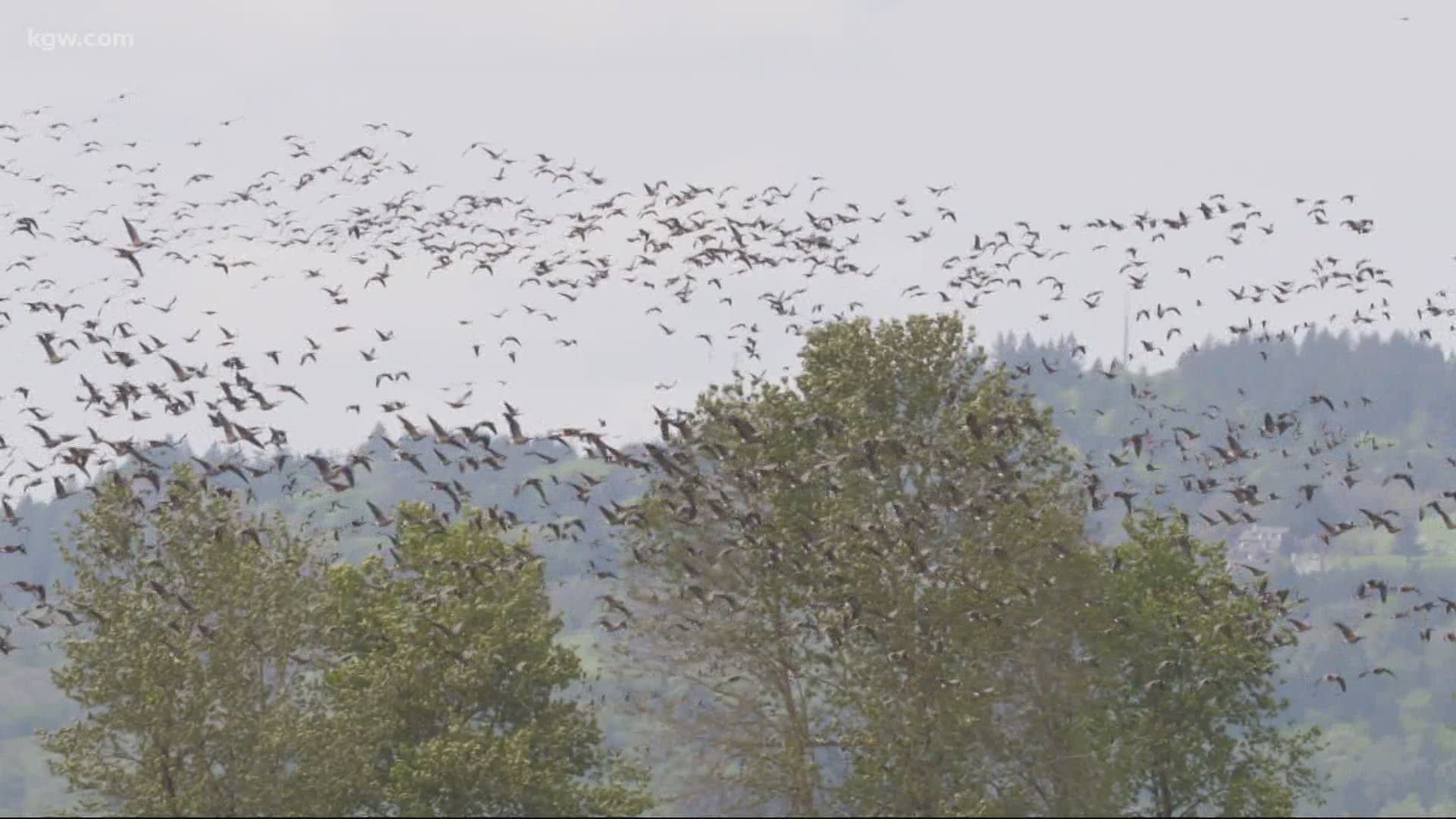 PORTLAND, Ore. — There is an amazing wildlife show for those in the know across three Oregon wildlife refuges. Consider it three getaways for the price of one visit and where you’ll enjoy a front row seat to see the "Winged Wonders of the Willamette Valley."

If lawnmowers had feathers, they couldn't hold a candle to a hungry flock of Canada geese. The big birds fly and soar then land to munch the grass across deep lush pastures at the Baskett Slough Wildlife Refuge near Dallas, Oregon.

Each November, it is a time and place for goose song for little else can be heard when the birds gather by the thousands.

“Well, there’s a bunch that’s for sure,” noted John Gahr, a biologist with USFWS. “We counted many thousand and it is pretty cool to see all those birds lift off at first light – you hardly hear anything else but the birds.”

It is a raucous, rowdy chorus for sure, but you cannot blame the birds for doing what comes naturally. They arrive at Baskett Slough from far off arctic nesting grounds and have come to this U.S. Fish and Wildlife Service refuge for the habitat.

Baskett Slough consists of wetlands and ponds and open grassy fields that are framed by crew-cut stubble fields and towering oak trees that grow across nearby rolling hills.

Baskett Slough is one of three Willamette Valley wildlife refuges that was established in the 1960’s to protect this sort of habitat for dusky Canada Geese; a sub-species of goose that’s in serious decline.

“It’s strictly for sanctuary,” Gahr said. “It’s their winter home so they’re not being lifted off their feeding areas. Our goal is to keep them right here on the refuge, so they don’t venture so much out to surrounding private land.”

There are comforts for the visitor too – including a platform where you can duck in during frequent rainstorms – plus, there are spotting scopes to make the viewing easier for the people of all ages.

In addition, there are many information boards and kiosks that explain the life history of the geese and the background of the refuge system.

But don’t get too comfy as you enjoy the wildlife show! You’ll want to carve out some time for refuge stop number two that’s just 30 minutes to the east.

She’s a former staff biologist with the USFWS and was once in charge of all of the goose census efforts across the valley refuges.

Monroe is knowledgeable and a fascinating person to visit with about the refuge system and the bird life.

She will often park and use binoculars to scan the flocks, counting dusky geese most of the time. Many of them sport bright red collars around their necks.

The collars were attached many of the birds in Alaska during the molt period when geese are unable to fly.

“Dusky’s are a pretty good-sized goose with a distinct chocolate color to their chest; a pretty uniformed dark bird overall.”

She added that Dusky Canada Geese – one of seven sub-species that travel to or through Oregon – are in trouble.

"I think this year’s number was just below 7,000 so they’re not doing very well as far as recruitment and survivability goes," Monroe said. "In fact, their numbers are decreasing basically every year – so they’re kind of losing ground.”

That makes their time on the refuges more critical than ever.

If you come to hike the refuge grounds, you have several trails to choose from.

I enjoyed Molly’s favorite trail called Pintail. The hiking trail is a broad, wheelchair accessible wooden lane that winds through an oak and ash forest and keeps you out of the mud and marsh.

At the end of the trail you’ll enjoy a viewing blind that sports a large window that allows you to peer across a marsh and see plenty of ducks, geese and shorebirds. We even spied a rare peregrine falcon!

Overhead, a signal as a flight of ducks whistled as they winged their way past us; it was time for us to move on to refuge number three.

The 5,000 acre William Finley Wildlife Refuge offers miles of trails for the visitor to enjoy too. All of the trails have hidden surprises along the way – we watched an eagle rise from his roost and caused an eruption of feathers, goose song and absolute mayhem.

US Fish and Wildlife spokesperson Sallie Gentry told me it’s an everyday event, and the eagles are looking for an easy meal by taking the weak or injured goose or duck.

“It’s the old predator-prey game and it happens here all the time, Gentry said. "Amazing to watch too. Because we’re established for the conservation of the birds, but if we can offer visitors a chance to see the wildlife without disturbing them, then we want to offer that opportunity."

Whether it’s driving through in your automobile and looking out on the fields covered in geese, or hiking one of our trails and just taking a leisurely Sunday stroll – bring your camera, bring your kids, it’s a great place.”

Each of the Willamette Valley refuges is open every day to provide places where visitors can expect an escape from the city rush to enjoy the rush of wild wings.