There are more than a hundred giant sequoias across Forest Grove, and many are at least 140 years old. One of them is the largest tree in the state. 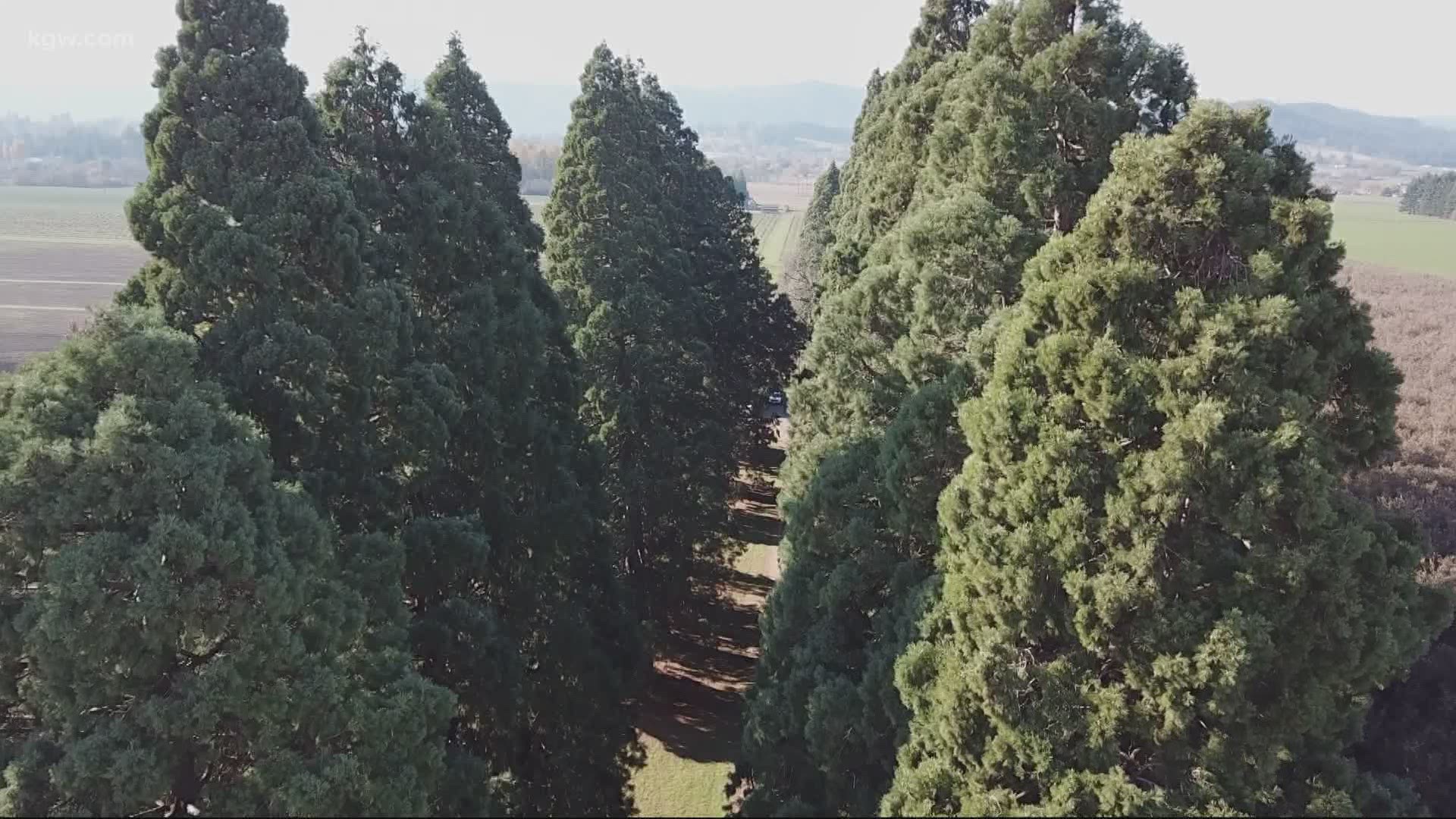 WASHINGTON COUNTY, Ore. — If you think your Christmas tree is a real beauty this season, Grant McOmie says this week’s getaway may find you feeling, or wanting, a bigger tree!

He takes us to the Land of the Giants: giant sequoias that seem to touch the sky and are more than a century old. The trees are known for their age, their size and the stories that link them with the roots of Oregon history.

When you step into Washington County’s Land of the Giants, it is best to have them in clear focus: “These are magnificent huge trees but, boy, they are hard to capture with a camera,” said famed Oregon landscape photographer, Steve Terrill.

His eyes were opened wide with wonder and pride when he gazed up and along two rows of giant sequoias that stand like sentinels just off Porter Road near Forest Grove.

He said they are a challenge to capture with a camera: “I love shooting from a distance so to show the whole realm of the giant trees, but I also like to get inside to show their beautiful, twisted gnarly bark and branches. These giants are almost magical looking! When walk up close and around them, you feel like you’re inside a bit of a magical forest.”

The Porter Road giant sequoias reach back to settlement times in the mid 1800s when entrepreneur John Ramsey Porter, fresh and flush from the California gold fields, settled in the county on a family land claim near Forest Grove.

“We (Forest Grove) have the largest ones (giant sequoias) because of the early plantings by Porter. Some trees date back to the 1850s. They are just a magnificent tree that works well with Forest Grove. We are called the ‘Tree City,’ and from a bird’s eye view you can see the giant sequoias popping up all over the town.”

Word of mouth and a solid reputation meant easy sales for Porter. There were many 19th century homeowners eager to make a statement about their economic success in the Oregon country.

There are more than a hundred giant sequoias across Forest Grove, and many are at least 140 years old. One particular and well-known giant is located on the corner of Pacific Avenue and B Street.

It is a tree for record books!

The giant sequoia stands 152 feet tall and is 32 feet around. It is the largest in Oregon and it is recognized as a state heritage tree.

Terrill said he could not resist the beautiful giant: “It’s got gorgeous lines to it! I strive to capture that feeling in the framing of the photo; that majestic power that trees of this size have.”

He said Oregon’s heritage trees are worth checking out.

They are part of a unique tree program sponsored by the Oregon Travel Information Council that was established in the 1990s to recognize Oregon’s special trees.

Steve offered a few suggestions of trees that you can visit.

The Hager Pear Tree is at the hectic junction of I-5 and Highway 22 in Salem. Planted in 1848, the old tree was once a part of a huge pear orchard that supplied fruit across the state. It is the only one left!

Or the Waldo Park redwood in downtown Salem! Although the park is tiny in acreage, it is huge in stature, and it is located right next to the Oregon Capitol building.

Or consider a visit to Willamette Mission State Park. It is home to the oldest cottonwood tree in the country. Terrill said, “That tree is not only old – 225 years or more – but you or I could not get our arms around the tree. We’d need, five, six, seven more of people to do that.”

Terrill added that you don’t have to travel far to see magnificent heritage trees; many can be found in Portland’s Hoyt Arboretum.

“I want people to look at the many trees inside the Arboretum and say, ‘Geez, this is gorgeous, and this is Oregon, this is in Portland? Wow, it’s just unbelievably beautiful and just a great place to hike and enjoy.” For the past couple of years, Terrill’s been documenting hundreds of Portland’s heritage trees that are part of an online photo project sponsored by Portland Parks and Recreation.

“I like to really work an area where a heritage tree is located, and I will take lots of notes about its size, neighborhood and other details. If necessary, I will come back and capture it at its best. I like to bring it to life.”

You can walk to many of Portland’s and Oregon’s heritage trees. You can also visit them online to discover the stories that the trees can tell.

Terrill added, “It’s important to keep these stately trees around for the rest of us to enjoy.”

For more Oregon adventures, be sure to follow the new Grant’s Getaways Podcast and tune in to behind-the-scenes stories from nearly four decades of television reporting.

His next book, “Grant’s Getaways: Another 101 Oregon Adventures,” will be published in 2022.