Grant's Getaways: Kayaking in the Lewis and Clark Wildlife Refuge

The Lewis and Clark National Wildlife Refuge was established in 1972. It consists of more than 20 islands stretching more than 27 miles of river. 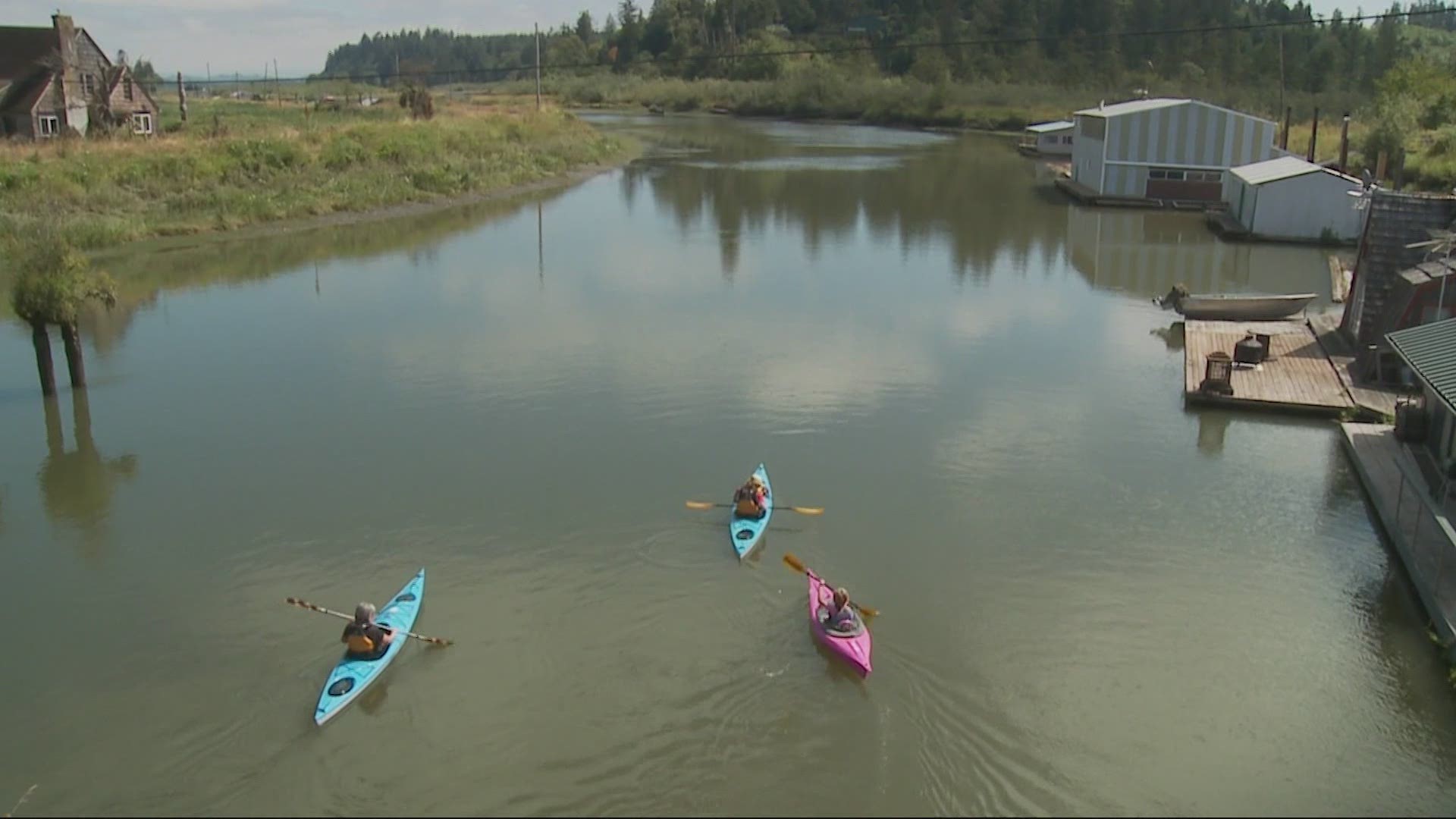 CLATSOP COUNTY, Ore. — There’s a remarkable chain of islands in the Columbia River that has been protected as a wildlife refuge for nearly 50 years. Grant takes us through the Lewis and Clark Wildlife Refuge and discovers that adventure is only a paddle stroke away.

Could there be a better escape from a simmering, sweltering summer than time on a river?

A time for old and new friends to gather near Svensen Slough in Clatsop County to check their boats, safety gear and life jackets prior to launching on the incoming tide.

“We’re about five miles above Tongue Point (near Astoria) and just off the backwaters of Prairie Channel,” noted Gibons. “We’re going to take advantage of today’s incoming tide and paddle up inside the slough and then paddle with the tide through the wetlands of the Lewis and Clark Wildlife Refuge.”

Gibons said that his safety gear included a VHF radio and GPS. Both are “must-haves" on this paddle adventure.

“So, we can talk to the Coast Guard if need be, and we can also punch in and listen to the weather forecast. The GPS tells us where we are at all times, and it really is important to have the right equipment all the time on the Columbia River.”

It was a dreamy day as tide, wind and sun merged to perfection so we could paddle a river stretch seldom seen so close.

Steve and his wife, Bonnie Gibons, enjoy steering newcomers and experienced alike through the refuge islands. It’s an especially wonderful experience inside the cockpits of the smooth-sided, 16-foot sea kayaks.

The boats easily moved in just four inches of water; so a simple effort to explore 8,000 acres of islands, mudflats and tidal marshes that make up the refuge.

Randy Wiltgen, a longtime accomplished paddler, said, “The boats are stable, even more stable than a canoe. You’re low to the water and it’s really amazing because you do feel like Lewis and Clark when you’re out here. It’s as though you’re discovering it for the first time.”

The Lewis and Clark National Wildlife Refuge was established in 1972 and consists of more than 20 islands stretching more than 27 miles of river.

The stretch is also a part of the Lower Columbia River Water Trail: a 146-mile, bi-state reach from Bonneville Dam to the Pacific Ocean.

On the quiet backwater areas of the refuge islands, you feel a closeness to an unchanged landscape. Gibons pointed out the abundant native plants called wapato that are always by your side.

“It is a water plantain! Native people harvested them with small dugout canoes to help. Women tied the boats off to their waist with a sash or belt and then walked through the shallow muck. They could feel the wapato tuber with their toes and then reach down and pull them out and wash em off. They would grind or mash the wapato. It’s high in starch like a potato and it was a main staple of people’s diets for thousands of years.”

Despite being just 80 miles from Portland, Bonnie noted that it is rare to cross paths with other paddlers on these trips and the experience often feels a distant world away.

“You are out here with the wildlife and there’s usually no other people so it’s very calm and peaceful.”

Bonnie’s granddaughter, Baylee Harding, joined her grandparents on this trip and matched the adult’s paddle strokes with ease.

Bonnie added that Baylee sat in her first boat at age five: “I have never seen one kid that didn’t like it. Kids come back and they just love paddling. They love getting out with their parents in a tandem the first time and the next time they come out they want to be in their own kayak.”

Tracey Cole took her first lesson two decades ago and she said she became hooked on kayaking.

In fact, her husband, Allan Cole, built her a stunning boat of cedar, oak and mahogany. The two have traveled across the region’s waterways together ever since.

“There’s just something about wood that sets me off,” noted Allan Cole. “The look and the feel of it. Plus, it’s a hobby that keeps me occupied and I like to be able to use it too.”

Tracey Cole added, “That’s the beauty of living in Oregon. If you have the time and take a notion you can grab your boat and be somewhere peaceful and beautiful and enjoy the wildlife in short order.”

In short order, we crossed paths with an aerial show that was astounding: two mature bald eagles locked talons in a moment of rare romance. They were intertwined and spun through the air – helicopter fashion - until just the right moment to break loose. It was an incredible view and we felt lucky to have watched it.

It was one more reward for our paddling efforts across the refuge – plus, finding a comfort zone on the glassy water where confidence seemed to grow with each paddle stroke.

It was a day filled with summer’s glory, punctuated by intimate moments where nature’s touch restored the soul.

Randy Wiltgen offered, “The peace and quiet and tranquility to float along and let the current carry you. It is so quiet, relaxing and just a wonderful spot. Everyone deserves a break away to a place like this. I’ll be back soon.”

Be sure to follow my Oregon adventures via the new Grant’s Getaways Podcast, each segment is a story-telling session where I relate behind-the-scenes stories from four decades of travel and television reporting.

You can also learn more about many of my favorite Oregon travels and adventures in the Grant’s Getaways book series.

My next book, “Grant’s Getaways: Another 101 Oregon Adventures” will be published in the Fall of 2022.