Terrill's work has been featured in books and hundreds of magazines, including the likes of Audubon, Sierra Club and National Geographic. 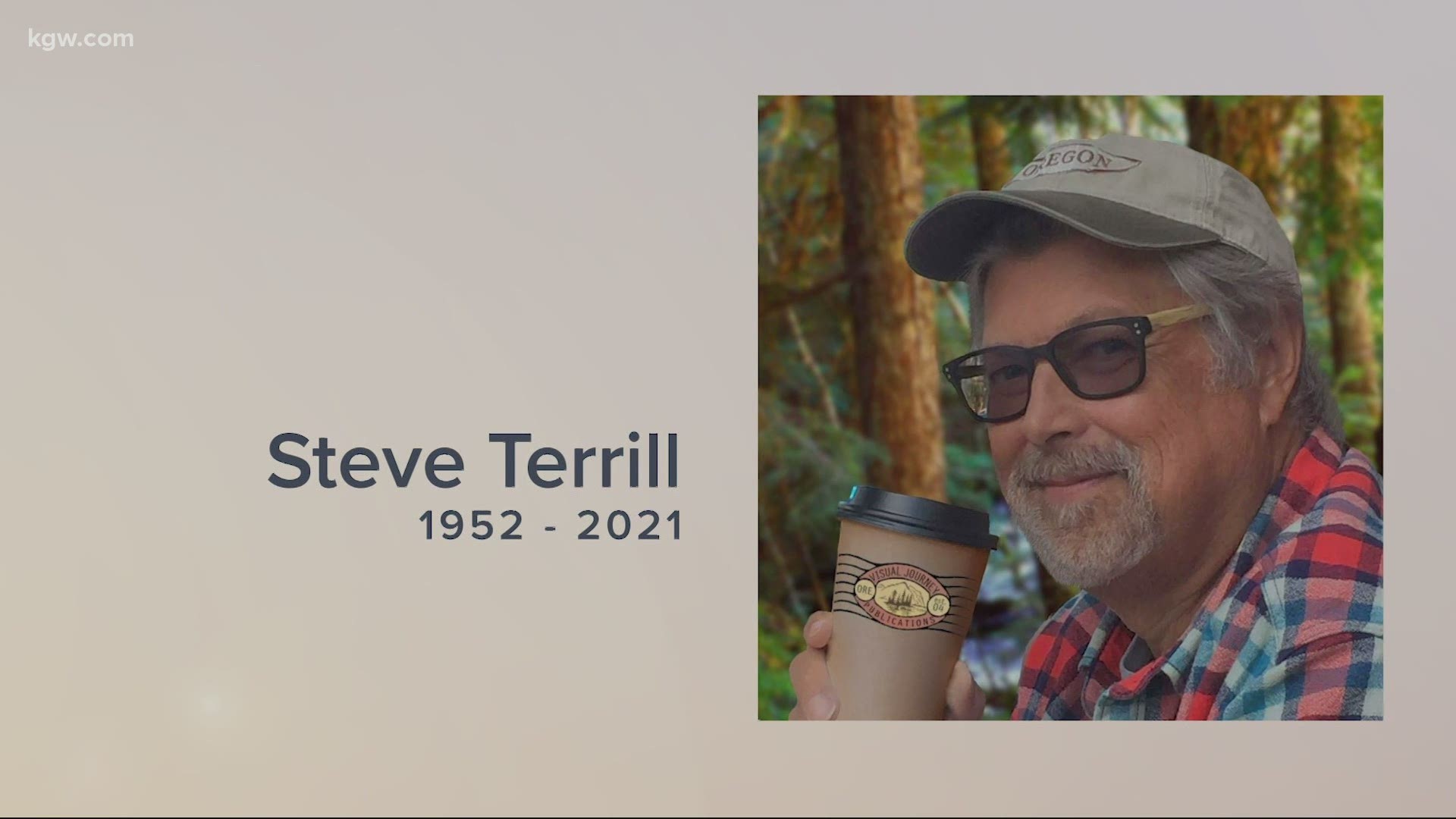 PORTLAND, Ore — Steve Terrill’s love affair with Oregon was deep and lifelong. It was often on full display whenever he visited the top of Rowena Crest in the Columbia River Gorge.

Not long ago, he strolled a section of trail that stretched toward the glorious Columbia River. He stopped every few yards to admire the incredible riot of color that had broken out.

“It’s an explosion of color out here, isn’t it,” exclaimed an excited Terrill during a morning-long photographic field trip to the Tom McCall Preserve at Rowena. “All the flowers are out and blooming. It’s like a rebirth of the world again … so beautiful out here.”

Steve Terrill’s field routine was smooth, precise and efficient. His tripod, camera and moving his eye to lens all seemed like smooth extensions of his soul. He told me that the beauty of the wind-swept plateau and the sprawling 200-acre site was jaw-droppingly gorgeous.

“I could be out here for hours doing this! I absolutely love being in the gorge in springtime. I really do!”

Terrill ventured out here, across the greater Pacific Northwest region, for over 40 years.

He especially loved to show us how grand a place Oregon could be; from its distant horizons to rugged landscapes to places where the light and shadows simply took the breath away.

Steve’s was a dream job! He was a longtime freelance photographer chasing perfect light from the Siskiyou Mountains to the Snake River, from the Columbia River Estuary to the wildlands of Owyhee River Country.

“I was born and raised in Portland,” he explained to me on a brilliant sunlit late April morning in the gorge. He was gathering images for his annual, self- published "All Oregon" calendars.

”Northeast Portland actually, and I just absolutely love Oregon’s diversity of shape and color and the gigantic scale of the landscapes. Plus, as a freelancer, if I can keep the money and the jobs in Oregon, then I’m helping all of us a little bit.”

Over the decades, he produced tens of thousands of his All Oregon calendars that grace households and offices around the world.

Terrill also shared his Oregon images through scores of books and hundreds of magazines, including the likes of Audubon, Sierra Club and National Geographic.

He showed off places that most folks could only dream about; images that looked and felt like treasures from Steve’s heart to ours.

Terrill passed away peacefully on Jan. 5, following a tragic and lengthy illness.

But his career burned so hot for so long; beginning with a cataclysmic event that marked a moment for millions: May 18, 1980 at Mt. St. Helens.

Back then, the budding pro with a young son in tow and a red-zone pass in hand, camped at Spirit Lake at the base of Mt St Helens on May 17.

In 2005, he told me that he thought he had it made: front row seat of the mountain!

But his young son, Steve, said they were in a bad place: ”I just didn’t want to be there. You know, it was one of them gut feelings.”

Elder Steve noted, “I was mad as heck because I thought I had the Pulitzer Prize there, just sitting there and if something happened it was going to be great!”

So, unhappily, he packed up and moved their camp miles away. They drove in the dark, back the way they came, and made a new camp.

The next morning, the mountain exploded into the history books and Terrill learned a tragic truth: Spirit Lake was buried under a mountain worth of ash!

His voice quivered, “I do get emotional! We were at Spirit Lake the night before and if it were not for my son, I'd never have left and I – we, wouldn’t be here now! Boy, did I ever hug my son,” said the emotional Terrill. “I didn’t know what else to do! Twenty-five years and I still get this way.”

As that day moved forward, so did Steve.

“The ash was unbelievable, and I saw the lightning hit all around. The eruption created its own weather patterns. You felt like this was the dawn of man!”

Terrill got his shots. In fact, he got hundreds of them, including his most famous that was later displayed in the White House.

Terrill thanked his lucky stars that he listened to a small boy for one landmark moment. “I captured history, but if it weren't for my son, I wouldn't have captured it. We would have been history.”

For nearly 30 years, we caught up with him many times at many places across Oregon.

Like the small backdoor byways where little trails lead to big discoveries.

Once, we met along Highway 202 just off Highway 26 and then slowly wound our way through the mountains to reach Lee Wooden Park. Steve was especially drawn to the stunning and gorgeous Fishhawk Falls that raced across the exposed and jagged ancient basalt.

“I capture what nature puts out in front of me,” said the famed photographer. “That is really all I do. Anyone can. Just open your eyes and look at the different things that really make this a natural backdrop for my photography.”

On another trip, we brought cameras and tripods to capture the sites along the four-mile out and back trail to reach the Blue Pool.

“When I go out in the woods, I hike slow and look at things and I pace myself. There are literally thousands of photographs – from reflections off the water, the alder trees and white bark, the lichens and moss, the downed wood somewhat discolored from the water. It’s an array of gorgeous subjects and I feel like a little kid; always exploring – always," Terrill said.

The four-mile hike paid off with stunning clarity at the McKenzie River’s birthplace called Blue Pool.

Blue Pool, also known as Tamolitch Pool, is where the McKenzie River seeps to the surface through underground lava fields that flowed across the landscape eons ago.

Terrill offered a tip: “I’m looking for something in the foreground that captures your interest and just captures the essence of where we are at.” Most recently and, sadly, for the last time, we joined him in the Land of the Giants.

He had never been here before. His eyes were opened wide with wonder and pride as he gazed up and along two rows of giant sequoias that stand like sentinels just off Porter Road near Forest Grove. The trees are more than 140 years old and the little kid came beaming through once more.

“Just to get under and inside these trees to show the beautiful, twisted gnarly bark and branches they each have. It’s almost magical-looking and when you walk in there, you’re almost in a little bit of a magical forest.”

More than once, I asked Steve, ‘What’s your secret?’

He would smile, wink and wryly reply: “Just set up and be patient. That’s all I can say, really be patient.”

Steve Terrill was an Oregon treasure, and we are all the richer for him.

He will be missed.