One of Oregon’s prized wild areas is cherished for its Three R’s: rugged, remote and relentless!

You will feel on top of the world of the deepest gorge in America along the Hells Canyon Scenic Byway.

When you travel through Hells Canyon, be prepared to get more than your feet wet – we recently joined Mark Yates (Hells Canyon Adventures) aboard his 40-foot jet boat named “Calebra” that is powered by twin diesel engines that produce 800 horsepower.

Yates has been guiding visitors on the Snake River of Hells Canyon for a dozen years, so he knows every twist and turn, every treacherous rock and powerful current.

“We’re in the deepest part of Hells Canyon right now and will be for about six miles downriver. You can see the shadows are longer here from the surrounding cliffs--not surprising when you consider we’re thousands of feet deep in the canyon right here.”

It’s a wild river where a rugged and remote landscape is always by your side. Plus, there’s a certain rush of adrenaline that hits you after you realize there are many really big white-water rapids waiting just around the bend.

The names conjure up images of frothy, foamy moments of terror: Wild Sheep Rapids, Granite Rapids, and Rush Creek Rapids. Each is unique, but all seem like brewing cauldrons of white water--and they deserve respect.

“The big water is the draw,” Yates noted. “It’s not really technical white water with lots of rocks or obstacles to avoid; just gigantic waves every couple of miles.”

Yates has been guiding Hells Canyon for a dozen years, so he knows every twist and turn and every treacherous rock in the powerful currents. 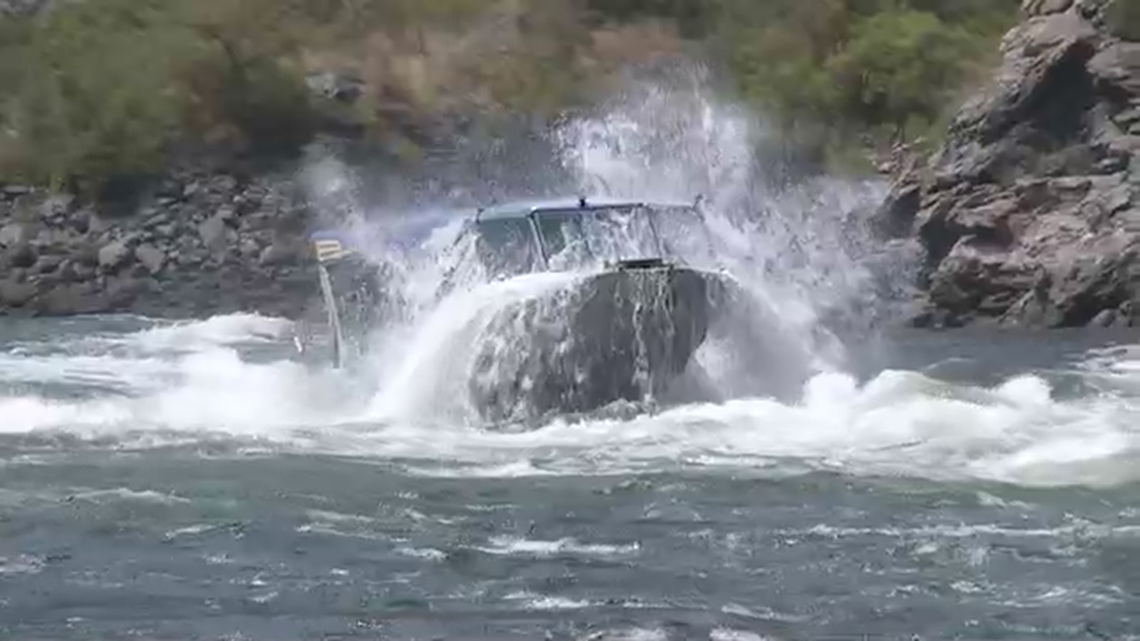 He also knows the quiet times. The places in between the rapids where wildlife are easy to spy – we enjoyed views to plentiful deer, soaring eagles and many big horn sheep; some so close to the river, it seemed you could almost reach out and touch them.

There were also signs of the former human lives that lived in the remote canyon. You see, there was a time--a slower, quieter era—when the Snake River offered a hopeful future for homesteaders eager to scratch out a life along the rich river bottom land.

Those days are long gone for sure - and yet today, in the heyday of easy travel to hard-to-reach spots, solitude and solace remain easy to come by in Hells Canyon.

In Hells Canyon few roads, phones, radios, or televisions add up to remoteness by any standard – just as it did a century ago.

A century ago, Hells Canyon offered a hopeful future for homesteaders eager to scratch out a living, according to Robin and Russell Whittington.

The Whittingtons are volunteer hosts at Kirkwood Ranch, a U.S. Forest Service Museum in Hells Canyon.

The Whittingtons have been regulars of a sort having served as hosts for the past seven summers. During their time in Hells Canyon they’ve learned great respect for the earliest people who carved out a living in the desolate location.

“These people who first lived in here were hearty souls,” said Robin. “Many of the homesteads started during the depression and it was a hard, demanding life – you had to make do, fix whatever broke – there no were hardware stores around.”

The isolation had its rewards in lessons of self-sufficiency and working together as a family.

“For one thing you learned to be self-sufficient and how to survive. You learned to depend upon yourself, and I don’t think people do that much anymore. There’s also a feeling of constancy in here.”

“Visitors can learn much about the local history when they stop in,” added Russell. “People moved out of the cities to places like this to survive the depression. It’s a real chunk of American history and it rolls back time if you stay here for any length of time!”

The river perspective to Hells Canyon is unique with towering rock cliffs that seem to touch the sky – but there’s another way to enjoy the view – starting at the top!

The Hells Canyon Scenic Byway allows you a drive-in approach to see Hells Canyon and there’s no finer perch than the Hat Point Fire Lookout Tower where it is 7,000 feet to the Snake River far below.

Randy Smith grew up in nearby Joseph, Oregon and he loves to explore the nooks and crannies of Hells Canyon.

“It’s the fact that it’s the deepest canyon in North America – it’s got so much topography between the Seven Devils and the Wallowa Mountains,” said Smith. “It’s just special and it’s filled with wildlife. It’s about as remote as you’re going to find and have access with a vehicle.”

Back on the water - the Snake River rolls on to a rhythm not lost on the visitor as the canyon opens up with terrain that changes from sheer vertical walls of the upper river to wider benches or terraces.

“It’s just gorgeous the way nature has carved such a deep canyon with a beautiful river running through it,” added visitor Mike Lawrence. “It is wonderful to get a chance to see it. There are many beautiful spots throughout the northwest, but this is very rugged and adventuresome with a lot of adrenalin.”

“And part of the adventure is not knowing what’s around the next bend,” added Yates. “We‘ve spectacular scenery, wildlife and offer the ability to find remoteness, a natural environment and we make it time accessible.”

It is a distant place that will capture your heart and never let go!

In addition, be sure to check out  “Grant’s Getaways Guide to Wildlife Watching in Oregon.” You will enjoy 48 uniquely Oregon adventures highlighting my fish and wildlife encounters. scores of colorful photos by “grant’s getaways” photographer, Jeff Kastner, show off some of our finest moments in the field.  you can also learn more about many of my favorite Oregon adventures in: "Grant's Getaways: 101 Oregon Adventures."