For one week every other summer, Oregon’s Cascade silence is broken when a helicopter takes flight with a load of "flying trout." 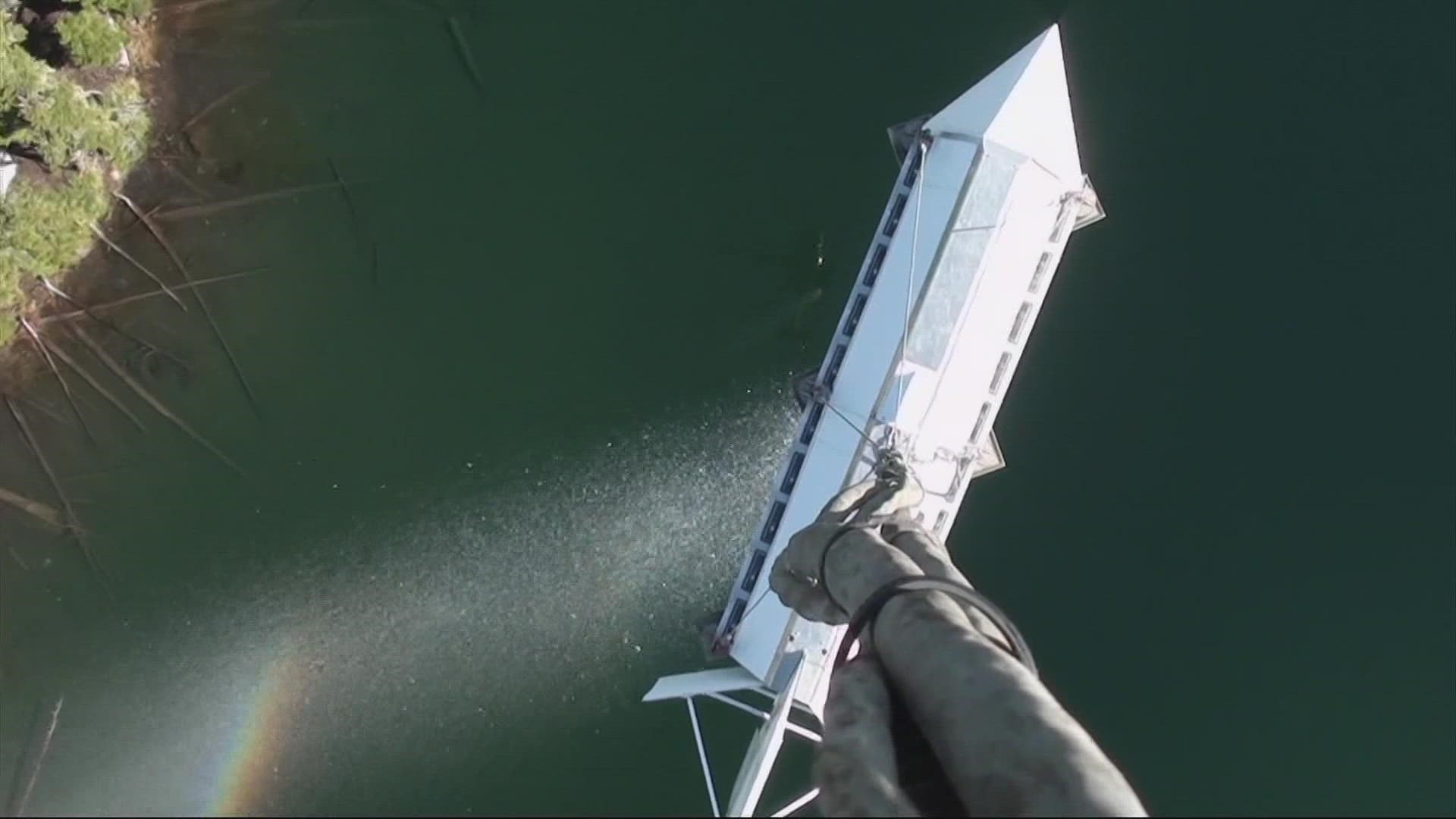 But for one week every other summer, Oregon’s Cascade silence is broken when a Bell U1H1 (owned and operated by Columbia Basin Helicopters of Baker City) helicopter takes flight with a load of “flying trout.”

“We start our aerial trout stocking at the Oregon/Washington border and end at the California/Oregon border and we do the entire Pacific Crest Trail from one end of the state to the other," noted Oregon Department of Fish and Wildlife’s (ODFW) Kurt Cundiff. “It’s a pretty awesome view – get to see a lot of different lakes and areas that most folks just don’t visit.”

Oregon’s high cascade areas are remote and difficult to reach — usually by horse or on foot, so ODFW’S  “aerial stocking program” delivers tens of thousands of the so called “flying trout” on time and on target into nearly four hundred high lakes in one week.

Chief pilot Dave McCarty logs more than 22,000 hours in the chopper and said that he wouldn’t trade the two week-long adventure for any other job.

“I love this job! I see the entire Cascades in one week and it is just amazing! I approach each lake by looking it over first, seeing which way the riffles are blowing on the water (which helps determine which way the wind is blowing). If you get turbulence or downdraft you can feel it dragging you a bit, but for the most part it flies real nice.”

McCarty pilots up to four flights a day during the weeklong project and had ground support crews scurrying into action on his return to the base.

This week’s base for the Northern Cascade flights was the Mt. Hood Meadows Ski Area’s Sunrise Lodge parking lot.

On the ground, tens of thousands of baby rainbow, cutthroat and brook trout are loaded aboard a special unit called the “Aerial Stocking Device” or ASD.

ODFW engineers built the fish-hauling unit back in ’97.

Ground crews load up to 400 of the three-inch-long trout into each of 30 aerated tanks on the remote controlled device.

The device sports a rear tailfin and an aerodynamic nose that lend a familiar look, like a miniature “space shuttle.”

The history of Oregon alpine lake trout stocking is rich and colorful. In the early days of the 20th century, horse pack trains made long, arduous treks into the Cascades to deliver the baby fish. It was a summer-long effort to reach all of the lakes, that were often frozen over or closed due to slides.

In the 1960s, fixed-wing aircraft took over and then helicopters cut down on time and expense. Today, the helicopter with its remote-controlled unit hanging 60 feet under the ship’s belly will fly into nearly 400 lakes in just one week.

“The navigator has a list of the lakes that identify which fish species go into which water body,” noted project manager Kurt Cundiff.  “The navigator gives that information to the bombardier who sites behind him. When McCarty says ‘go ahead and release fish,’ the bombardier presses a button on the remote controller. That will release the appropriate compartment on the device that holds the fish. It runs real smooth.”

State Fishery biologist Erik Moberly said that the fish do well in Oregon’s high lakes but in some years, like this one, not all lakes will be stocked.

“That’s because a lingering winter finds most lakes above 6000 feet still frozen over so they’ll have to wait until next time — that’s two years from now.”

The baby trout thrive and grow fast in the nutrient rich lakes. They will grow to catchable size in just one year.

A recent angling survey noted that one out of four of the state’s 600,000 licensed anglers participate in high cascade lakes fishing opportunities and they are a dedicated group who say they return year after year.

The project is funded through the sales of Oregon angling licenses and tags and the cost: benefit of the project is significant.

Managers said that every dollar that is spent on the week long aerial trout stocking of Oregon’s high lakes generates an additional $16 to the Oregon economy by the anglers and campers who journey to the remote areas.

Moberly, an avid angler and backpacker himself, added that the project provides unique Oregon angling opportunities to those willing to go the extra mile and find adventure.

“It’s rewarding to go into the wilderness with a rod and reel on your backpack so you can catch your dinner. If you’ve never been out to the wilderness to see some of these gorgeous lakes, you really owe it to yourself to get out there. Oregon is such a beautiful place.”

Be sure to follow my Oregon adventures via the new Grant’s Getaways Podcast. Each segment is a story-telling session where I relate behind the scenes stories from four decades of travel and television reporting.