The refuge is located 10 miles west of Salem. 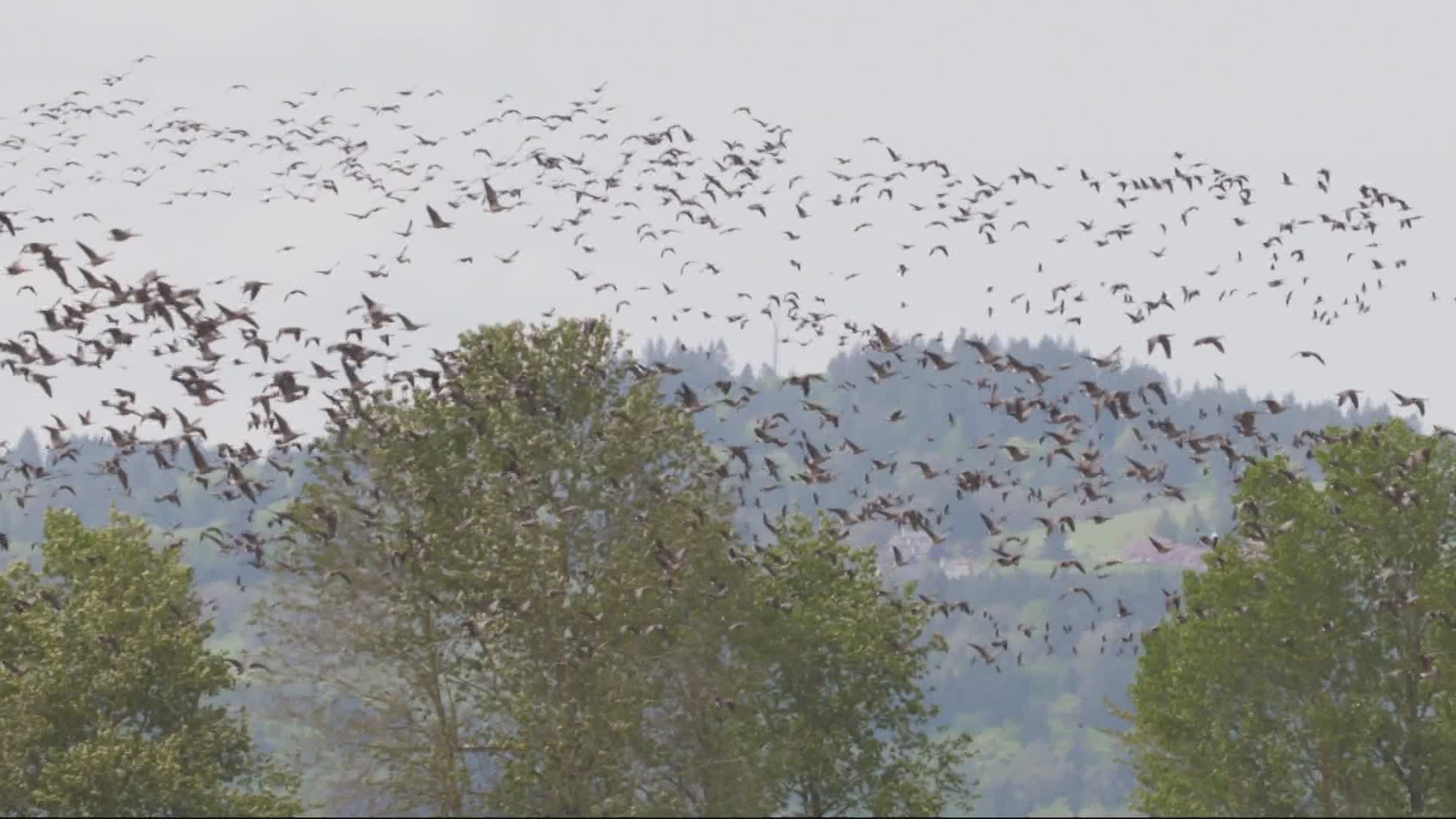 SALEM, Ore. — Winter’s done and spring has sprung, and I’m so glad that’s true! So, consider a front row seat to Oregon’s biggest springtime migration event at a wildlife refuge near you.

If your daily commute feels hectic, consider 20,000 Canada geese jammed wing to wing, twisting and turning and rising in flight. These big birds soar, land and munch the grass across the lush pastures at Baskett Slough Wildlife Refuge, 10 miles west of Salem.

Photographer and wildlife biologist Kelly Warren likes to be where the flocks are, and he says Baskett Slough is one of four easy-to-reach U.S. Fish and Wildlife refuges in the Willamette Valley that protect waterfowl habitat.

“You got wetlands, you got oaks (trees) and you have geese … lots of geese,” said Warren. ”Right now, they’re gorging themselves on the grass to get enough nutrition to head back up to Alaska to breed. They winter in the Willamette Valley because there are food sources and everything they need to succeed.”

Warren’s eye for the wild, plus his camera skills allow him to feed his addiction shooting wildlife with a long-distance lens; especially the seven sub species of Canada geese that migrate to Oregon.

It is the “Identification Field Guide to Geese” and documents the Oregon goose story with history, biology and especially photos. So, if you don’t know a cackler from a Taverner from an Aleutian, Warren’s new book will set you straight.

“My book is an ongoing process, and I don’t think I’ll ever be happy with the overall results," he said. "Writing is a hobby that adds to my waterfowl addiction, whether it be hunting or at a refuge watching wildlife or taking photos of these birds.”

Warren’s dad and granddad drew Kelly to the outdoors when he was a boy. Grandfather Charles Warren was a noted fish and wildlife professor at Oregon State University, and he saw something special in the youngster and bought Kelly his first camera.

“My grandfather said, ‘You’re always in the marsh, always hunting, always doing things so go buy a camera and use it.”

And he did! And they also traveled to wildlife meccas like Klamath and Malheur wildlife refuges where a new world opened for young Kelly Warren.

“We would take spring bird trips to Malheur and other areas and learn about different species, plus I could see the migration routes and corridors and learn everything possible about birds. So, that started this hobby, this passion for wildlife photography.”

Warren has collected over 150 goose photos in his text, but he averaged 500 photos for each one selected for the book.

“I have lots of extended hard drives! he said.

Warren’s book has caught on with folks who don’t hunt but like to watch and learn about wildlife, and he shares photo tips with anyone who wants to capture the outdoors on their own.

“Anytime between November to late April can be great times to find waterfowl on the refuges. You will catch birds when they’re not so wary, so early morning and evening are best times.”

The wildlife biologist works for Ducks Unlimited, and he says he’s often joined by his wife and youngster in the field.

When it comes to the quality of his shots, Warren says there are several things to keep in mind: “Photo clarity is critical as are composition and contrast too. I try to capture a lot of geese in flight. Stationary gets boring after a while.”

And when it comes to advice for newcomers wanting to capture the perfect wildlife photos? “Stay in your car! The geese are used to cars driving back and forth so if you get out, they are going to maintain distance and not allow you to get closer.”

Solid advice from a trailblazing pro who will set you on the right path for exciting and thrilling moments in the great outdoors. Be sure to follow my Oregon adventures via the new Grant’s Getaways Podcast:

Each segment is a storytelling session where I relate behind the scenes stories from four decades of travel and television reporting.