When a historic summer heat wave hits, Grant McOmie heads to the Oregon coast for a treat that pays off at the dinner table. 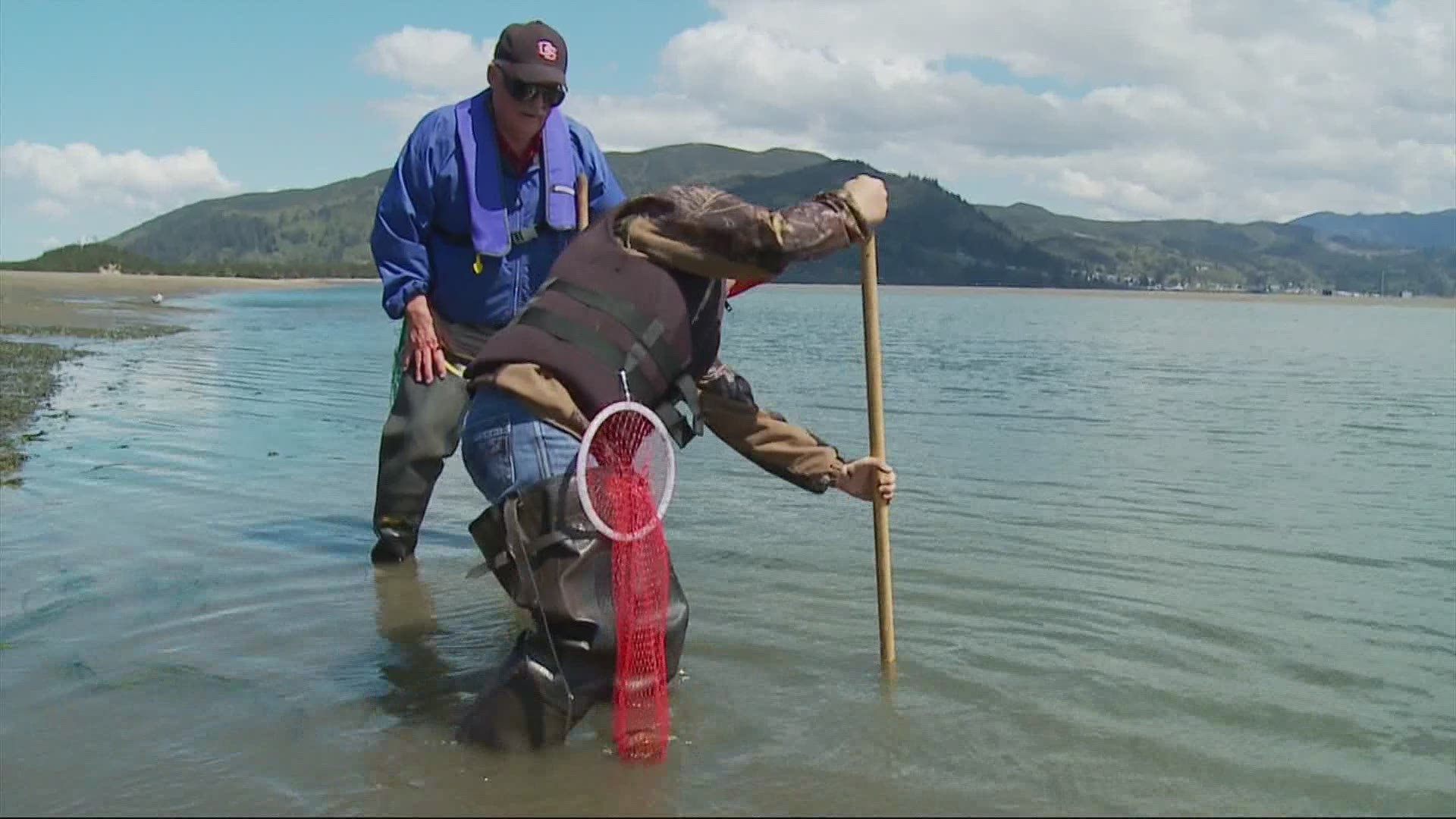 TILLAMOOK COUNTY, Ore. — When a summer heat wave hits, many folks escape to the Oregon coast—and who can blame them?

I enjoy cooling off and finding coastal adventure by digging my supper from the sea. The summertime low tides are perfect for this adventure as we cool off with cockle clamming.

When you drive the Pacific Coast Scenic Byway, backroads lead to new adventures! So it is at Tillamook Bay where the four mile long Bayocean Spit offers a hike or a bike ride to reach clam heaven.

Birt Hansen is an old hand at bay clamming because he grew up near Oregon’s Coos Bay and spent childhood days exploring tidal flats, backwater sloughs, and freshwater ponds. Among the strongest and most lasting memories for this gentleman are youthful times in the sand and muck digging for cockle clams.

He showed us how it’s done:

“Oh, it’s so easy – especially if you have ever weeded a garden,” said Hansen.  “That’s because our clamming rake is actually a four-pronged weeding rake and all you do is get that rake out in front of you and gently pull back through the sand. As you pull, feel the tines of the rake hitting the clams. The rake actually ‘pings’ a bit when you roll one up--especially the cockles. If you feel something, then hook it with the prongs and lift it up. When that happens, we like to say “clam on.”

Our clam of choice is called “cockle,” and it didn’t take Cole Hansen to figure out how it was done. He was soon raking up a storm in the soft sand.

Some of the cockle clams were as big as baseballs and he sported a huge smile as he gained more confidence in the game.

“Man, that’s a beauty, Cole,” noted his granddad, who smiled with obvious pride that his grandson had learned the ropes of this recreation so quickly.

Raking or digging bay clams is so easy anyone can try! All you need is a rake or a shovel and if you are 14 years or older – an Oregon Shellfish License.

“Some folks like to get out as early as possible and have more digging opportunity and they follow that tide as it goes out, looking for new exposed areas and then work back as the tide turns to flood.”

Each clammer is allowed 20 cockles and you must use your own container.

As we collected our limits, Hansen said, “The best is yet to come!”

He was right! The next day, longtime clammer and seafood chef, Bob Waldron, joined me to prepare what he called, “Oregon’s versatile shellfish.”

He prefers cockle clams in chowders or fritters or simply steamed open and eaten right out of the shell.

This time, he offered something new: Grant’s Getaway Stuffed Cockles! He said they are always a hit with a crowd.

“It’s what I have done most of my adult life! We’d load the bikes in the back of the pick-up and then drive out to the Bayocean Spit and ride out for a couple miles and then rake cockles along the bay shore. They’re a very meaty shellfish and very tasty.”

For this recipe, Bob began by sautéing one pound of Italian sausage, one cup chopped onions, half a cup chopped parsley in two tablespoons of butter. I coarsely chopped two limits of medium-sized cockle clams.

Bob combined the two and then added eight cups of bread croutons (I like to use a bag of unseasoned stuffing) that had been drenched in clam broth—he stirred the mixture to the consistency of bread dough.

We filled each half cockle shell with a tablespoon of the mixture, followed by a topping of parmesan cheese and placed the stuffed clam shells on cookie trays.

We popped the trays into a 400-degree oven for 5-8 minutes – or until a light brown. A group of eager friends had gathered and they couldn’t wait to dig in to the latest seafood treat.

Diner Sea Dotson said, “Delicious – and just a hint of the sausage but it doesn’t overpower it. It does add some good flavor to it. I’ve never had clams prepared this way and these are really good.”

“They are meaty and tasty,” added Kay Waldron. “The mixture allows the clam flavor to come through, but not too strong. It really allows the flavor of the other ingredients to come together. It’s yummy – really good.”

It was delicious and a fine payoff to the day’s coast adventure and I think that the best part of this recreation is that even the littlest ones can do it and have some success. It may offer a little bit of mud or sand and a whole lot of estuary water, but there are lots of clams, so success is easy to come by. All of it adds up to a lot of family fun.

Preheat the oven to 400 degrees F.

In a medium pot, bring 6 cups water to a boil over high heat. Place the clams in the pot and let them steam until they open, 5 to 6 minutes. Remove the clams and strain the water from the pot (which is now clam broth) and reserve it for later use.

Remove the meat from the shells and when cool, clean out the clams’ stomachs and then chop into chunky 1/4-inch pieces or use a food processor. (Don't over process, the meats should be chunky.)

The shells are set aside for later use. Make sure to remove any muscles left on the shells and discard any broken shells.

In a large skillet, over medium-high heat, melt the butter and add sausage and onions and parsley and cook until the onions become translucent.

Add the chopped clam meat and cook for 3 to 4 minutes longer.

In a large mixing bowl, add the clam broth to the croutons and fold together. When the croutons have absorbed the broth, add the hot ingredients to the bowl.

Incorporate all of the ingredients and add enough plain breadcrumbs until the mixture is stiff. (I like it to be the consistency of bread dough.)

Divide the mixture into balls, about 5 ounces each or 3 inches in diameter and place firmly into the shells.

Place the shells on a sheet pan into the oven until the outside of the stuffing is toasted brown, approximately 10 minutes. The stuffed clams are now ready to be served.

Be sure to follow my Oregon adventures via the new Grant’s Getaways Podcast. Each segment is a storytelling session where I relate behind-the-scenes stories from four decades of travel and television reporting.

My next book, “Grant’s Getaways: Another 101 Oregon Adventures” will be published in November, ‘22.