Grant's Getaways: A Gleam of Gold

In the Tillamook State Forest – where sun and shadow dance through the towering Doug fir trees, Fick's well-trained eyes are fixed down close to the ground where there's a culinary reward. 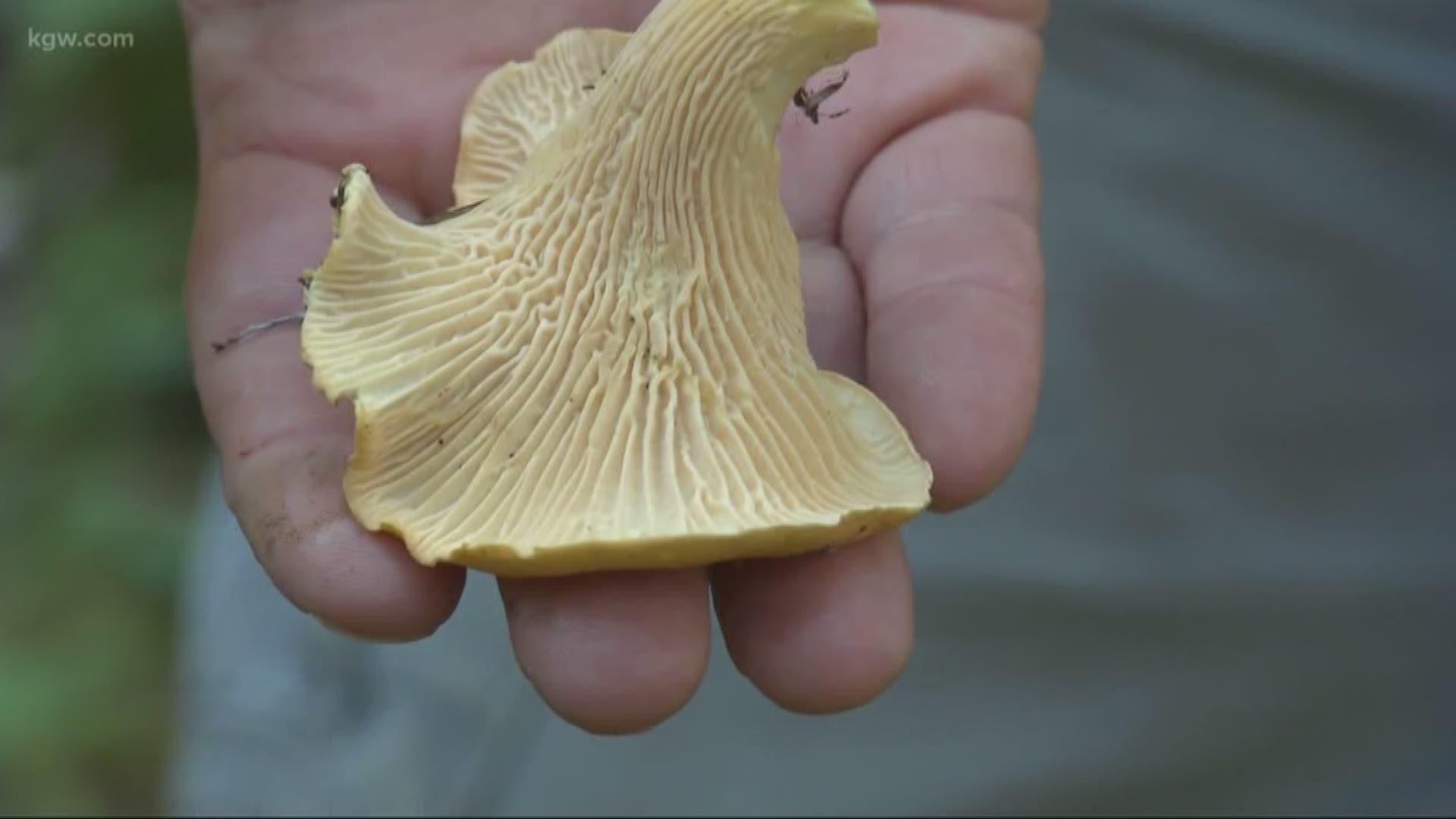 There’s nothing better than a stroll in the woods, especially when there’s treasure underfoot. Steve Fick figures it’s simple: if you want to harvest wild mushrooms, learn their habitat.

In the Tillamook State Forest, where sun and shadow dance through the towering Doug fir trees, Fick’s well-trained eyes are fixed down close to the ground where there’s a culinary reward.

“Ohhh, there we are – chanty number one – that guy right there – just waiting to be cut,” exclaimed Fick with a hearty laugh.

Photos: A Gleam of Gold

He used a sharp short-bladed pocket knife to cut the chanterelle free from the ground and said it’s their taste that brings him back each October: “Chanterelles have a golden-orange hue and their chalice shape makes them easy to spot – but their true allure is a woodsy flavor that’s hard to resist.”

Since 1999, the gorgeous fungi have been Oregon’s official State Mushroom.

Fick added that chanterelles are not the only mushrooms in the forest. In fact, there are dozens of other mushrooms that grow here and “most are none too friendly to people and many are downright dangerous.”

Steve cleaned approximately one pound of chanterelles – (he never washes them in water but prefers to clean them off with a soft rag or brush) and then it was time to head indoors to my kitchen.

Steve and I were joined by Fick’s longtime friend and chef, Preston VanHook, who has worked in fine white-linen restaurants across the region, and said he loves the down home taste of the Oregon chanterelle.

He proceeded to trim off the stems from 20 medium sized chanterelles for the first of three recipes that he prepared for a small group of friends who gathered at my home to watch Chef Vanhook prepare a meal based upon his favorite chanterelle recipes.

He lined each chanterelle cap upside down on a cookie sheet.

Meanwhile, Fick brought out a salmon carcass or “frame” and used a small teaspoon to scrape nearly a pound of fresh salmon from the bones of the carcass.

“Nothing goes to waste,” added Steve with a smile.

Preston then mixed the salmon with one 1/2 cup of mayonnaise, three finely sliced green onions and 1 teaspoon each of oregano and thyme and a 1/2 cup of parmesan cheese.

Recipe #2 is a hot “Chanterelle-based Vinaigrette” for a spinach salad.

Preston roughly chopped two cups of chanterelles: “I do this rough chop with the mushrooms so they are forkable.”

In addition, he finely chopped a medium sized shallot and three strips of bacon and added, “You can’t go wrong with bacon and chanterelles!”

Approximately one pound of the wild chanterelles hit the frying pan with a “Bounce, sizzle and snap - “Chanterelles are one of those things the really depend upon a hot pan,” added Fick.

When the mushrooms were nearly done, he added 1 cup of sherry vinegar and ½ cup of water and warmed the mixture through until it was hot.

“I’ve some big beautiful parsley here that I will chop and add near the end of the cooking time – along with a small amount of lemon juice,” said Vanhook.

The hot vinaigrette was poured over a huge bowl of fresh spinach leaves give the salad a fine wilted look and a delicious smell.

Preston explained that the French Duxelles is a finely chopped (minced) mixture of mushrooms or mushroom stems, onions, shallots, and herbs sautéed in butter. It is a basic preparation used in stuffing and sauces or as a garnish.

He added ½ cup of heavy cream to complete the duxelles that was topped with a sprinkle of chopped thyme and fresh parsley.

The sauce was poured over the top of the two cooked salmon filets and completed an amazing chanterelle feast!

“Dinner is served,” said the beaming chef who was clearly proud of his three distinct presentations.

The eager diners were excited and toasted the chef.

The stuffed chanterelles are the bomb,” said diner Kerry Harsin.

His wife, Sue Harsin, added, “I love the salmon with chanterelle sauce – it’s a little bit of heaven.”

Diner Leslee Sipp exclaimed, “I give this dinner a five-star rating! Everything about these recipes is delicious and really simple to prepare. The chanterelles are delicious!”

Steve and Preston were flattered by the reviews, but VanHook insisted, this is what Oregon is all about: “I think in Oregon all around, we are just spoiled with the bounty you can harvest from the forest, or the rivers or the sea - we’re really lucky that we can go out and tromp around and feed our family too.”

Fick added that the meals that you contribute to are the most rewarding – that is, the ones connecting you and tie you to the source of your food: “There’s something exciting and magical that comes about when you find it and prepare it and when you share it with friends and family – I don’t think it can get much better.”

The Oregon Department of Forestry allows you to harvest up to one gallon of wild mushrooms on state forestlands, but any more than that, you are considered a commercial picker and must buy the $100 permit at any state forestry office.

Steve stressed critical safety points if you choose to head into the forest at this time of year – First, pick only mushrooms that you know are safe. If you don’t know go with someone who is experienced and does know or take a mushroom ID class. (He suggested the Cascade Mycological Society.)

He also suggested that mushroom hunters who are in unfamiliar territory stay close to the road and never out of earshot of the road traffic.

In addition, be sure to check out “Grant’s Getaways Guide to Wildlife Watching in Oregon.” you will enjoy 48 uniquely Oregon adventures highlighting my fish and wildlife encounters. Scores of colorful photos by “Grant’s Getaways” photographer, Jeff Kastner, show off some of our finest moments in the field. You can also learn more about many of my favorite Oregon adventures in: "Grant's Getaways: 101 Oregon Adventures."