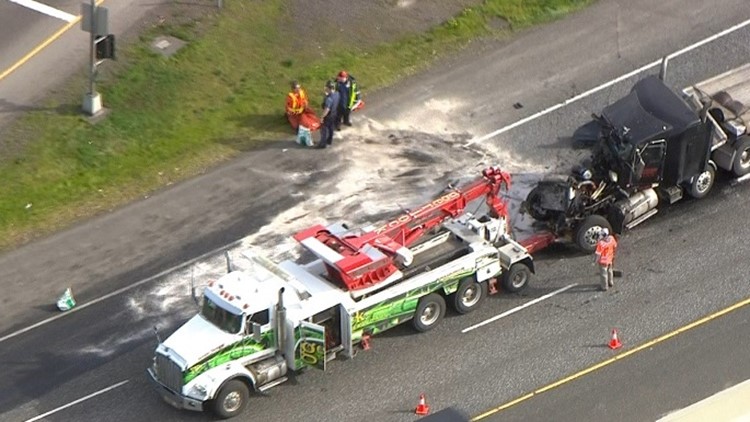 Photo by: KGW
Crash on northbound I-205 near Sunnyside Road

I-205 northbound reopened in Clackamas after crash, spill

CLACKAMAS, Ore. -- All lanes of northbound Interstate 205 have reopened after a crash and oil spill shut down all lanes Thursday afternoon.

The crash occurred at around 3:15 p.m. near milepost 14, about one mile south of the intersection with Sunnyside Road.

A semi-truck rear-ended another semi-truck, according to Oregon State Police. The collision caused debris and oil to be spilled onto the road.

Lanes on I-205 NB south of Sunnyside could be closed for a few hours as crews cleanup oil spill and remove crashed semi #pdxtraffic pic.twitter.com/9wKGWa9YUO

The at-fault driver was taken to a hospital with non-life-threatening injuries.

All lanes were closed for about two hours with drivers getting by on the shoulder.