Controversy brewing over perceived 'clear cutting' of trees in Oregon

Following wildfires, crews go in and cut down damaged trees. They do it for safety. But some people claim these crews are cutting down more than dangerous trees. 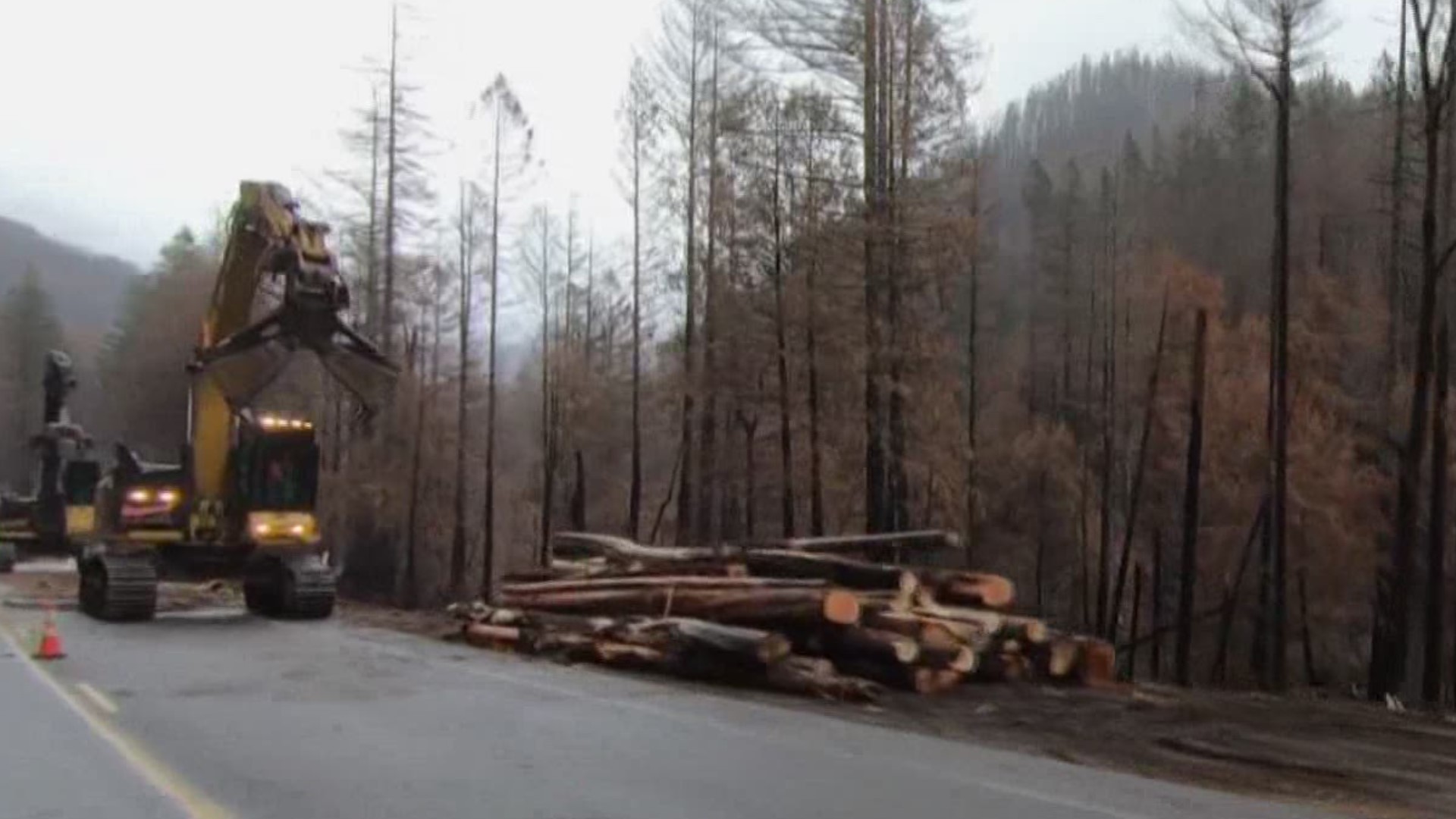 PORTLAND, Ore. — As soon as the flames went out, the destruction was evident. The historic wildfires that swept through Oregon's forests, canyons and communities destroyed hundreds of homes and countless trees. Burned trees lined the highways as did piles of those already cut down.

The state estimates a total of 140,000 hazard trees along highways or on private properties will need to  be removed for safety reasons. It's a massive task.

The state brought in contractors to do much of the work. But critics say those firms are doing way more work than they need to by tagging and cutting down trees that are not hazardous.

The concerns prompted state lawmakers to hold a hearing Wednesday. They heard from both sides. Those in charge of cleaning up the debris testified as did witnesses who said the entire process is a disorganized, unregulated mess.

"In some cases they went back 600 feet off the highway to take out trees," he said. "That's just ridiculous and clear cutting."

But others say the problems started much earlier. Tom Ford was the project arborist before he was let go in January. He said the guidelines for what constituted a hazard tree were never clear.

"Unnecessary harvesting post-fire is very damaging," Ford said. "And that's where where we are still at today."

Eric Phillips also worked on the project. He said they were told to speed up the process by marking "as many as we could in a day." Phillips said he initially thought it was a well-run operation, but his opinion soon changed.

"I was given 50 tags and the expectation was at least 50 trees per person," he said. "That's when things really started to freak me out."

However, the Oregon Department of Transportation (ODOT) and CDR Maguire, the Florida-based disaster recovery firm hired by the state to run the clean-up operation, maintain they are putting safety first and are also following FEMA guidelines.

"I assure you there are many layers of accountability and quality assurance that go into this process to ensure that trees won't be cut unnecessarily," said CDR Maguire CEO Carlos Duart.

Mac Lynde with ODOT said crews are required to follow strict protocols. "If a contractor takes down a tree that's not marked, it's a $2000-per-tree penalty," he said.

CDR  is very proud of the work we are doing with the Oregon Department of Transportation in the recovery from the 2020 wildfires that devastated nearly 4,000 homes, left thousands of dead or dying trees in its wake, and closed hundreds of miles of Oregon’s most traveled highways due to the hazards posed by burned trees and other debris.

I take these allegations very seriously.  It is unfortunate that the statements from a couple former employees whose employment did not surpass the 90-day probationary period are being taken at face value.  Unfortunately, I cannot get into personnel matters due to legal constraints.

Our role as the independent monitoring firm is to serve as ODOT’s owner’s representative in overseeing field operations and ensuring that debris operations are safe, efficient and properly documented in order maximize the State’s reimbursement from FEMA.  Our duties also include ensuring federal, state and local regulations are followed as we assist in developing such guidelines such as those found in the Debris Removal Operations Plan. Our expertise is with FEMA reimbursement with all types of federally declared disasters.  We build strategic partnerships with local firms for their knowledge of the area and expertise in particular disciplines.

The local Oregon firm of Mason, Bruce & Girard is our principal environmental subcontractor and oversaw the development/refinement of the hazard tree guidelines.  They also perform quality control on all hazard tree assessments, markings, and removal.  They prepared and refined the assessment survey in cooperation with various governmental agencies and provide the final QC review of every tree that is tagged prior to removal.

As to the tree assessment and marking operation, this is a large and complex project and the assessment process was adaptively managed, as appropriate.  The guidelines have changed during the course of the past three months and former employee(s) that worked on the project in January have no current knowledge how the process has evolved to save trees if and where possible.

Each tree is assessed by an ISA certified arborist or professional forester pursuant to our contract terms by either CDR or our qualified subcontractors.  Furthermore, we have an additional layer of quality control that after a tree has been deemed hazardous by an ISA certified arborist or professional forester, prior to any tree being cut, a final evaluation is performed by an independent ISA certified arborist or professional forester.  As the assessment process was refined with input from various agencies, many trees have been reassessed, de-tagged, and saved.  It is important to note, the original tagging was not inaccurate, but was based on the current guidelines both state and federal at the time and it is through our efforts with ODOT and other agencies that that guidelines have been revised to reduce the amount of trees requiring removal.

CDR Maguire and our team are sensitive to the loss experienced by property owners that had part, if not all, of their homes destroyed as the results of the 2020 wildfires.  They have experienced substantial loss.  We are empathetic to the additional trauma homeowners feel when their landscape may change again as a result of the removal of hazardous trees.  While we cannot begin to understand their loss, we hope our efforts and the efforts of all involved keep them and their families safe in the future.

We believe in communication and transparency and appreciate the opportunity to expand communications with the public, stakeholders and the Legislature, facilitating increased input from property owners.  Our #1 priority is the current and future safety of the individuals affected as well as our teams assisting in this recovery effort.