As extreme heat becomes a summer norm, orchardists and experts are pondering the viability of a rite of passage in the Pacific Northwest

OREGON, USA — For most of us, the heat dome that engulfed the Columbia River Basin in late June, shattering temperature records and claiming nearly 200 lives in Oregon and Washington, is a fading memory.

But for U-pick farmers in the Columbia River Gorge the effects of the punishing heat wave still reverberate. The reality of a new climate is threatening their livelihoods, as well as a rite of passage for visitors and locals who trek to family-run orchards at the start of each summer to pick their fill of the region’s beloved produce.

One of those orchards is Hilda’s Organic U-Pick in Hood River, Ore., a 10-acre farm that Janet Parker opens to visitors in late June, when her highbush blueberries and Bing, Rainer and Lambert cherries come into harvest.

This year, Parker pushed back the opening of the U-pick season for nearly a week because of consecutive days of triple-digit heat, peaking at 111 degrees on June 29. Parker says the extreme heat cost her a fifth of the income she typically collects from blueberries, which she sold this season for $3.75 a pound.

Fortunately for Parker, she derives most of her income from cherries, which were mostly spared because they ripened in early July this year.

“If the heat wave was later, I think I would have been devastated,” she says. “The cherries would have turned to raisins.”

But at a cost of thousands of dollars per acre, by her own estimate, this “Band-Aid” is too cost-prohibitive and impractical a remedy for the rest of her crops.

For Brian McCormick, a farmer and winemaker at Idiot’s Grace in Mosier, Ore., triple-digit June temperatures further devastated this year’s harvest of organic Bing, Van and Royal Ann cherries. In June, he announced the cancelation of the U-pick cherry season at Idiot’s Grace due to “an unprecedented crop failure” brought on by freezing temperatures in the spring.

“And then the heat finally came and … for intact fruit, they just turned brown. It was horrifying. I have never seen that,” says McCormick. “They looked like they had been dipped in milk chocolate, and they turned soft. In the commercial world, the quality of cherries is defined by their firmness.”

As autumn darkens the leaves, Parker worries about the future of farming and food supply in a landscape transformed by climate change with hotter summers, declining rainfall and greater uncertainty at harvest time.

“I saw more devastation (this year) than I have ever seen,” she says. “How can you grow things if you continue to have heat waves such as that?”

Ashley Thompson, an assistant professor of horticulture at Oregon State University, says extreme heat can cause cherries and other fruits to “literally cook on the tree.” In addition, plants experiencing heat stress will produce a terminal bud and stop growing when temperatures start approaching 100 degrees and beyond.

Apples and cherries can also get sunburned with prolonged heat stress, developing brown spots that Thompson likens to a blowtorch heating up the surface of the fruit, blemishing not only its appearance and texture but its commercial value.

After the June heat wave, Thompson sent a survey to orchard owners in Oregon’s Wasco County to gauge the extent of heat-related damage to their crops. Sixty percent of respondents said they’d lost at least half their cherry harvest this year.

James Michael of the Northwest Cherry Growers and Washington State Fruit Commission estimates a 20% loss in the cherry crop this year, although he says a final tally of the economic damage will likely not be available for several months.

Some cherry orchardists in The Dalles, Ore., where the temperature broke 118 degrees this summer, lost 50% of their crop this year, according to Thompson.

It’s difficult to measure the broader impact climate change may have on U-pick operations around the Columbia River Basin.

According to a Travel Oregon marketing report, “the research related to spending associated with agritourism is scant, mostly old, and uses different methodologies.” Because agritourism activities are so broad—from an hour picking raspberries at a U-pick farm to visiting a winery to embarking on a week-long farm-based culinary course—“there is no typical spending amount.”

Agritourism is defined by Travel Oregon as “any activity that generates supplemental income for working farms and ranches by connecting their resources and products with visitors.”

In the future, this could alter the types of fruits historically grown in the Gorge.

“Apples need cool nights to color, so without those cool nights, we might not get nice red apples, especially things like honeycrisps,” says Thompson. “It also means the trees don’t get a break from this heat stress and they may not be recovering as quickly or easily because they’re still losing water.”

Even higher elevations may no longer be enough to shield crops from consecutive days of triple-digit heat. Just ask Randy Kiyokawa, who has been farming apples, pears and other fruits for more than three decades at his family farm about 2,000 feet above sea level in Parkdale, Ore.

“The intensity of the heat and the number of days of 100 degrees-plus, I’ve never experienced that in my time of farming,” says Kiyokawa.

Although the U-pick season doesn’t start at Kiyokawa Family Orchards until the second week of July, the heat wave in late June scorched about 10% of this year’s harvest of honeycrisp apples, according to Kiyokawa, who was able to salvage the sunburned fruit by pressing it into cider for purchase.

Kiyokawa thinks climate change has accelerated when his crops ripen for harvest.

“It seems like the harvest date has moved up five to seven days, if not more, in certain years,” he says.

It’s not possible to say when the next heat wave or extreme weather event will strike, decimating a harvest in its wake. Some remain optimistic about coming weather patterns. Others see a dire future.

“People are billing this as a once in a lifetime event. I don’t think that’s true. I think this will happen again and I think we need to be prepared for it,” says Thompson.

Thompson and her OSU colleagues are researching various cherry rootstocks for resilience, growing orientations and irrigation management strategies that could help minimize heat stress on plants.

She’s also studying how substances like fatty acids, calcium carbonate and kaolin clay could be applied as a kind of sunscreen, providing a layer of heat and sun protection on apple and pear trees.

But some farmers think the future of farming in the Gorge will rely less on new technologies and more on hard choices about what kinds of crops are grown, especially with more than 90% of the Pacific Northwest currently experiencing drought, according to the National Integrated Drought Information System.

“Our interest is in farming ever drier,” says McCormick. “We grow grapes because they are very tolerant of drought … so I’d go in that direction rather than planting more cherries.”

In the short term, U-pick farms and fruit stands will continue to play a vital role in Columbia River Basin agritourism. But the experience of picking your own fruit could very well shift for both growers and pickers alike in coming years.

“We need to think about how we grow our crops and what we are growing here and how that may change,” says Thompson. “And I’m concerned about us having just a couple of farms left who can afford to change their practices in the ways we might have to.”

Sheraz Sadiq is an award-winning journalist and producer based in Hood River, Oregon. He’s produced videos and reported on topics including climate change, self-driving cars, criminal justice and edible insects.

Columbia Insight, based in Hood River, Oregon, is nonprofit news site focused on environmental issues of the Columbia River Basin. 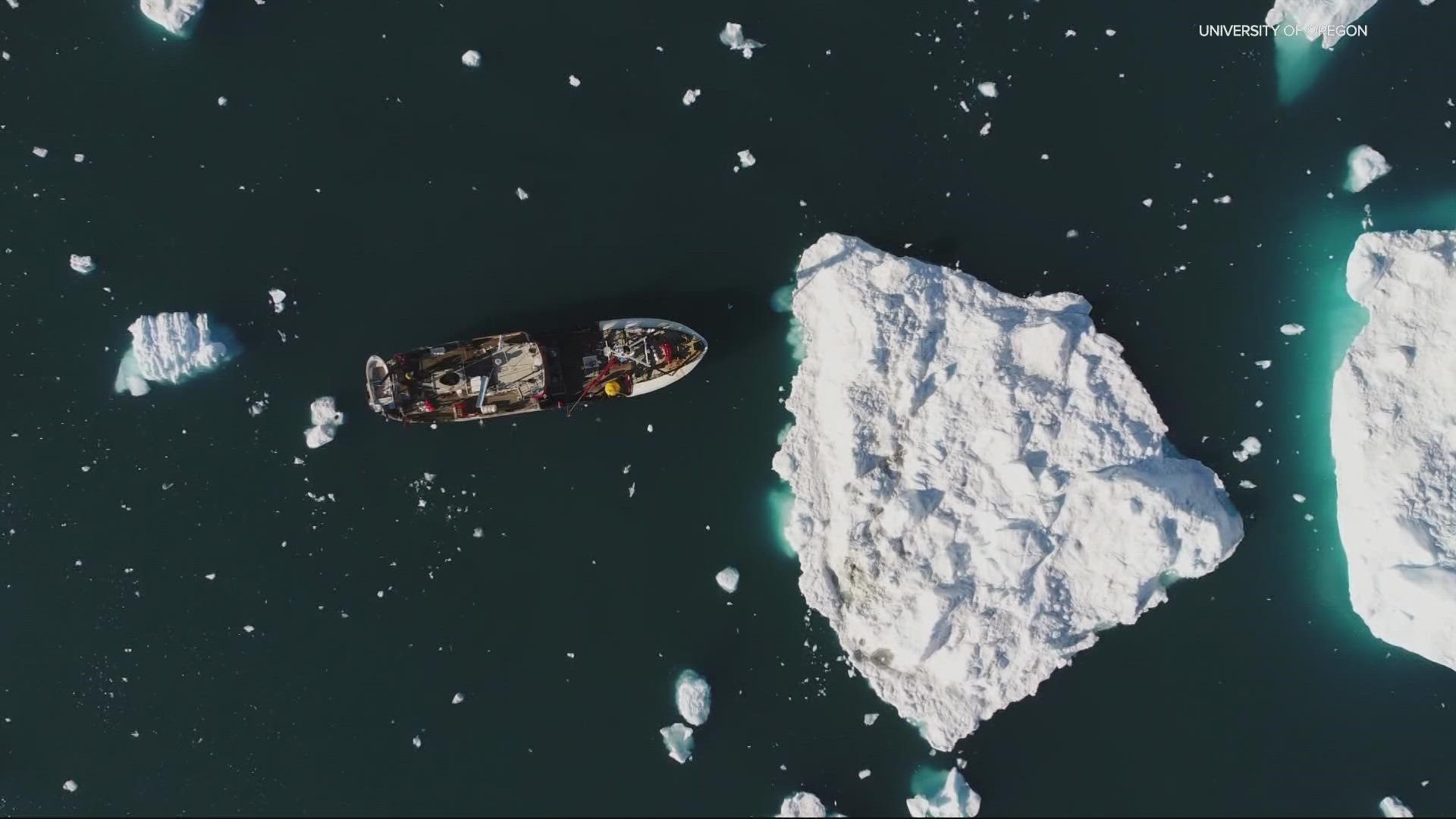