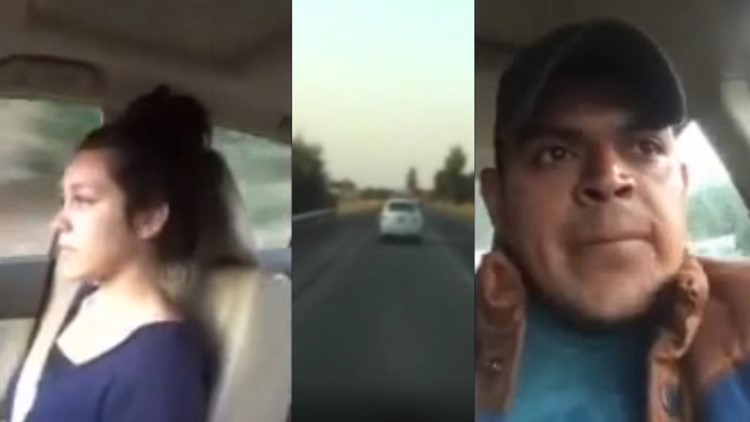 Urge to Kill Episode 4: The Chase

The sun had yet to rise, but Edwin Lara and the 19-year-old girl he had kidnapped, Aundreah Maes, were back on the road, heading from southern Oregon to northern California.

Edwin, at the time a public safety officer at Central Oregon Community College, admitted to Aundreah he killed Kaylee Sawyer the prior weekend while he was on duty.

The pair had stopped at a motel where Edwin had handcuffed Aundreah, forced her to take sleeping pills and made a terrifying sexual advance. If not for her quick thinking, they may not have gotten back on the road so quickly.

Edwin was driving Aundreah’s car when he noticed it was leaking oil. He pulled over at a small motel in Yreka, California. He told Aundreah they were going to steal a new car.

“We had driven through the parking lot. There was one room open and some guy was loading or unloading his car and Edwin was like, ‘We’re going to take that car.’ And I was like, ‘What? Can I just keep my car and you can go?’ And he was just like, ‘No you need to come with me,’” Aundreah said.

Edwin parked the car, took his gun and forced Aundreah to walk with him. The unsuspecting stranger, a man named Jack Levy, was loading photography gear from his room to his car.

Levy had stayed in that same motel room numerous times over the years. He had come to this part of California to take photos of butterflies. This year would be different.

As he was loading his gear, he saw two figures, dressed in black, step into his room.

"Edwin was like, ‘Don’t make any loud noises, don’t yell or anything. I just need your car keys we just need to get out of here,’” Aundreah remembered. “He was already pointing the gun at him at this point. I just remember like just kind of feeling like stuck in the crossfire of everything.”

Jack fell to the ground after Edwin shot him in the stomach.

“I had never heard a gun go off like that next to me before. It was like the worst feeling ever. I didn’t know if I had gotten shot or something because I could feel it in my body like the vibration of everything,” said Maes. “So, I was just like ‘What just happened?’ and I didn’t see anything happen. I didn’t see the gentlemen or him falling, it was just so weird, everything happened too fast.”

Edwin grabbed Aundreah and ran from the hotel toward the gas station next door, leaving Aundreah’s car behind.

Aundreah and Edwin get to the gas station, where Edwin decided he was going to steal a car with three people inside of it; 17-year-old Nima Gavimi, his grandmother and younger brother.

Nima’s entire family was driving back to Los Angeles after a trip to Canada. When Edwin approached their car, his grandpa and dad were in the bathroom.

“My dad needed to get gas and also he wanted me to drive because he was very tired and I'm the only other person in the car that could drive,” said Nima.

When he saw Edwin and Aundreah approaching, he thought maybe they were just going to rob him.

“I didn't like pay attention too much,” Nima said. “So, I just went back on phone and then I turned around again and like three seconds later he [threw] the girl into our car, slammed the door shut and like screamed, ‘Just get in!’ He pointed a gun in my head saying like, ‘Drive or I’ll shoot!’”

Nima started driving south on I-5. He could hear screaming from the backseat. He thought it was Aundreah, but when he looked back, he saw it was his grandma.

“Edwin’s getting very paranoid and he's like, ‘Tell her to shut the F up or I'll shoot!’ And we don't know how to speak our native language, Farsi, so we're trying to like figure out like how to calm her down and I'm driving and I had just gotten my permit,” Nima said.

While he was driving, Edwin grabbed Nima’s phone and scrolled through the call log to see if he had called 911.

"And then he said, ‘Well, I used to be a good guy. I used to be a cop, but then I just had this urge to kill, so I ran this girl over.' I didn't believe him. He told me a story about how he ran that girl over, then he kidnapped the girl behind us. And he drove 10 hours from Bend, Oregon to where we were. Then she shot an old man because the guy wouldn't give him his car keys.”

Nima and his brother then tried to appeal to Edwin’s emotions, begging him to let them and their grandmother out of the car.

After about 15 minutes, Edwin allowed them to get out at a rest stop.

“He looked around, there were no cars coming in,” Nima said. “We just stopped on the side of the road and he took the car with the girl and they left.”

Aundreah said she tried to convince Edwin to let her get out too.

“I was like, ‘Can I stay with them? You have a perfectly working car, you have everything you need,’” Aundreah said. “He was like, ‘No, they will try to shoot me and kill me if you’re not with me.’ He still needed that human shield.”

And just like that, Aundreah and Edwin were on the road again.

Moments later, Edwin grabbed Aundreah’s phone and began recording a Facebook video detailing who he was and that he was wanted. "Likely I am going to get caught, sorry about that girl, that girl in central Oregon."

He panned to show Aundreah to confirm she was OK. He made a point to say, "If you guys are wondering if I have done dirty things to her, no, I am not that kind of guy."

He said of Kaylee, "She just kept screaming and I had to silence her forever."

When he finished the video, he asked Aundreah to post it on her Facebook page, and title it, “Murderer on the loose.”

"I was like, ‘No, I have important people on my Facebook; friends and teachers and relatives and this is embarrassing, I don't want them to see me like that,’” she said.

Edwin threatened to hurt her, so thinking on her feet, she changed the privacy settings so no one could actually see the video, and posted it.

Next, Edwin called his wife Isabel. They spoke in Spanish to one another. From what Aundreah could father, it sounded like Isabel was trying to tell Edwin to turn himself in.

At this point, they’re about 30 miles south of Redding, California.

Edwin could feel the end was near, so he started speeding over 100 mph.

He took Aundreah’s phone and called 911.

Here's a portion of the call:

“Hi I’m Edwin Lara, I’m the guy on Interstate 5 going at high speed... I know you guys have the chopper on me already. I just want to say I am going to turn myself in,” he told the dispatcher.

The dispatcher tries to get Edwin to pull over, and when she learned Aundreah was still in the car, she asked Edwin to pass the phone.

She gets Aundreah’s name, then gets back to talking with Edwin.

“Just tell them not to be too rough on me, I can’t breathe right now, alright so…that’s all I wanted to say,” Edwin said. “I do have a gun on me, I’m not gonna flash the gun if you tell them not to shoot me, I don’t want to die.”

He told the dispatcher he was responsible for Kaylee’s death, and that he was wearing a bulletproof vest.

Several minutes later, he pulled over. The dispatcher stayed on the phone with Aundreah, who was clearly shaken. In the meantime, Edwin got out of the car, and surrendered himself.

In dashcam footage, you can hear an officer ask Edwin why he was wearing body armor.

“I came to throw down,” he tells police.

Thirty minutes later, he was processed at Tehama County Jail.

Aundreah said she felt relief, "At that moment I was like, Oh my gosh, this is done! I can go home, this is over, I’m ok, I’m safe. I felt this weight lifted."

But that relief would be short-lived as she was placed in handcuffs and placed into a police vehicle. She would be booked into the same jail as Edwin, treated as a criminal.

At this point, Aundreah has been missing from Salem for no more than 12 hours. She wasn't reported missing because her family assumed she was with a friend or at work.

And police had no idea she was one of Lara’s many victims.

In Episode 5, we learn just how long Aundreah was made to sit in jail following the harrowing 12 hours she has spent with Edwin Lara, the man who murdered Kaylee Sawyer. Detective Beckwith drives to California to interview Edwin and hear his confession. Police need to know where Kaylee is and they know Edwin has the answers.