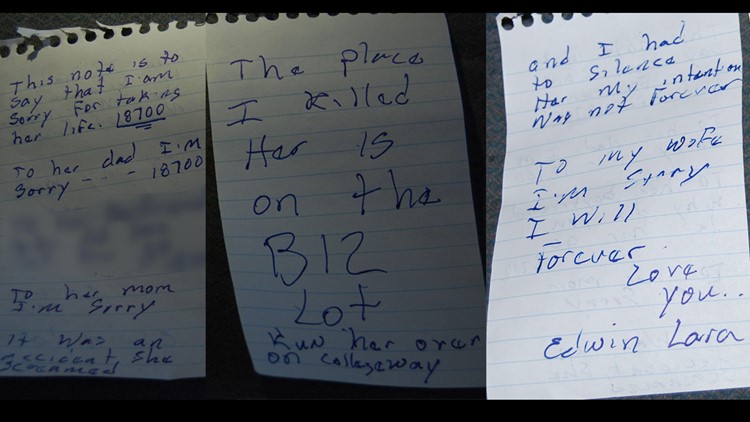 BEND, Ore. — Edwin Lara was in the midst of a six-hour interview in Tehama County, California on July 26, 2016, when he confessed to killing Kaylee Sawyer on the Central Oregon Community College campus the previous weekend.

While Edwin was being interviewed in California, a team of detectives in Oregon found a car he ditched outside a Salem Dress For Less store in the moments before kidnapping Aundreah Maes.

Inside that car, they found two hand-written notes.

The first note says, “The place I killed her is on the B12 lot. Run her over on College Way.”

The second says, “This note is to say I’m sorry for taking her life. 18700. To her dad, I’m sorry. To her mom, I’m sorry. It was an accident. She screamed and I had to silence her. My intention was not forever. To my wife, I’m sorry. I will forever love you."

Officers in Oregon were speeding toward the location on Highway 26 where Edwin had drawn the map. That spot across from the mailbox with the numbers from his notes: 18700.

Detectives said "187" is also the California Penal Code for murder.

Was Edwin playing some kind of mind game? Or was it just coincidence?

Bend Police Detective TJ Knea was one of the first officers at the scene. He parked his car and immediately ran out to search for Kaylee. He sprinted along the guardrail, which separated the highway from a small canyon filled with pine trees, rocks, and sagebrush.

"I ran at a dead sprint, down the road, next to the guardrail and looked to my left, which is south, as I ran west, I came across what I believed to be Miss Sawyer laying on the rocks," Detective Knea said. "I thought she was alive and I thought she was attempting to crawl up the face of the rocks ... I checked the pulse on her neck and I didn't have any vital signs."

Deschutes County District Attorney John Hummel visited the scene in the following days to gather a deeper understanding of the case before him.

"When you think about where he dumped her body, it's just the most awful of circumstances. You don't do that to somebody," Hummel said.

Kaylee's body was taken to the Medical Examiner's Office. It was determined she died of blunt force trauma.

"We advised her family not to look at the autopsy photos. They did not," Hummel said.

Back in California, Edwin was arraigned on charges of attempted murder, kidnapping and carjacking. He was eventually brought back to Oregon, and in the coming weeks and months, Edwin's attorneys prepare for trial.

They argued that Edwin's confession was inadmissible in court because his rights had been violated.

When Edwin was first booked into Tehama County Jail in California, he indicated to jail staff he wanted to speak with a lawyer. Staff thought he was asking a procedural question, not specifically asking for an attorney.

Under the California penal code, new arrivals in jail must be given a chance to make three phone calls with three hours of being booked. Edwin was in a holding cell for five hours and was never allowed to make any calls. It wasn't until much later until he was able to call his wife.

"Right now I feel that all my rights are being violated," Edwin told Isabel. "An attorney hasn’t been appointed to me, but they read my rights to when I got here. I keep asking for an attorney, and for me to be transferred to Oregon, that’s going to take a while."

"It was difficult for me because I had made some promises to her family members about the case being done the right way," Detective Beckwith said. "When I wasn't able to honor those promises, that was very difficult."

It was a crushing blow.

After Edwin’s confession is tossed out, attorneys move forward but there is an unexpected twist in the case.

Police look for someone else connected to the case.

Urge to Kill is a KGW podcast following the rape and murder of Kaylee Sawyer. After celebrating a bachelorette party in downtown Bend, Oregon in July of 2016. Kaylee disappeared in the middle of the night. The horrific details of her brutal rape and killing shook the residents of the quiet town in the Pacific Northwest. Her murderer would go on to terrorize several other families in a multi-state crime spree. He said he had the “urge to kill.” Our team sat down with all of his victims who were lucky to get out alive.