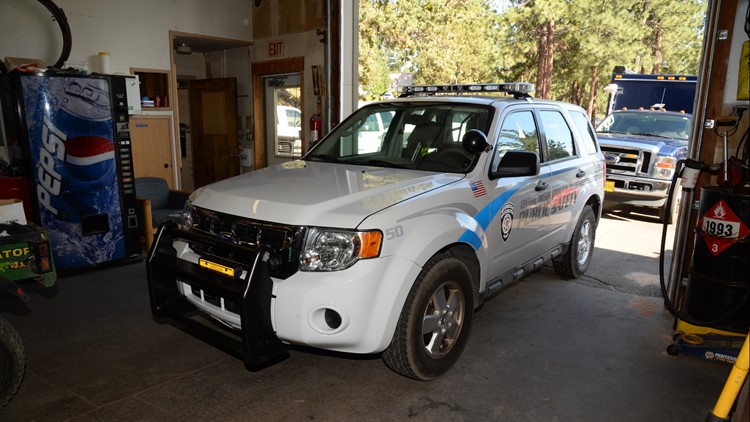 BEND, Ore. — Editor's Note: This story was originally published on KTVZ.com on July 27, 2016 and is being resurfaced as KGW launches a new podcast about Kaylee Sawyer's murder called "Urge To Kill."

A Redmond man was charged with murder Tuesday in the apparent homicide of a Bend woman whose weekend disappearance prompted a widespread search. Authorities also said a body had been found but they have not yet confirmed if it is that of Kaylee Sawyer, 23.

Edwin Enoc Lara, 31, earlier called a person of interest in the case, allegedly shot a man and carjacked a family in Yreka, Calif., early Tuesday, before California Highway Patrol officers chased and arrested him speeding south on Interstate 5, police said.

The chase ended in the arrest of Lara and passenger Aundrea Elizabeth Maes, 19, of Salem, just before 7 a.m. on southbound I-5 in southern Tehama County, Yreka police and the Redding Record Searchlight reported.

Late Tuesday afternoon, Deschutes County District Attorney John Hummel said Lara had been charged with one count of murder in the killing of Sawyer, last seen Sunday near her apartment complex close to the Central Oregon Community College campus on Bend's Westside.

Hummel and Bend Police Chief Jim Porter also said a body had been found, but declined to say where or provide more details. The state medical examiner will conduct an autopsy to positively identify the person and determine if it is that of Sawyer.

Hummel also read a family statement inviting the community to a vigil for Sawyer at 8 p.m. Tuesday at Discovery Park in Northwest Crossing,

Hummel said Presiding Deschutes County Circuit Judge Alta Brady had prohibited him and others from providing more details at this early stage in the case.

Late Tuesday, Yreka Police said interviews prompted them to determine "it is evident that one of the suspects is a victim," and they were planning to release Maes. They also updated the shooting victim's to critical but stable.

In an affidavit unsealed by the judge late Tuesday, Lara's wife, Isabel Ponce-Lara, is quoted as saying she questioned her husband's behavior.She said he broke down and cried, telling his wife he'd run over someone -- Sawyer -- in his COCC security vehicle while at work on the campus as a part-time security guard.

Ponce-Lara said her husband told her the woman walked out in front of him in the dark and he struck her with the front bumper, killing her. He said he panicked and disposed of the body but did not tell his wife where it was.

Porter told reporters he didn't know if investigators had determined if Sawyer and Lara knew each other, and credited Lara's wife -- a new Bend police officer -- with the key break in the case.

"We're very lucky someone came forward and pointed us in the right direction immediately," the police chief said. "We're also lucky detectives and others have been willing to go without sleep for 36 hours to honor the victim."

Porter said Lara's wife, Isabel Ponce-Lara, has been placed on paid leave -- not due to any presumed involvement in the incident or violation of policy. "You want to give that person room to at least respond and come back to some sense of normalcy. We do that with any officers or non-sworn employees."

Lara, a part-time COCC security guard, had been wanted for questioning as a person of interest in the apparent slaying.

A California Highway Patrol officer spotted Lara speeding south near Red Bluff Tuesday morning and tried to stop the car,  but it sped off, police told the paper.

Eventually, they said, Lara pulled over and police arrested him and Maes, booking them into the Tehama County Jail on suspicion of attempted murder, kidnapping, burglary and other charges.

The arrest came about two hours after Lara shot a man in the abdomen at Yreka's Super 8 Motel, according to Police Chief Brian Bowles. Police said the man was in critical and "unstable" condition at Rogue Valley Medical Center in Medford; his name was being withheld. He later had improved to stable condition.

A few minutes later, at a nearby gas station, police said Lara stole a silver Honda Accord with a man's three family members inside and forced one -- a boy -- at gunpoint to drive the car, Bowles said. The man left behind at the gas station called 911, he said.

The family was dropped off unharmed around 5:40 a.m. at a rest stop on northbound I-5 near Weed, Calif., and called 911. CHP brought the family to the Yreka Police Department, Bowles said.

The arrest occurred about an hour after dispatchers had notified officers to be on the lookout for Lara.

The officer safety alert had advised that Lara might be traveling with the missing woman or that she might be a kidnap victim, the newspaper reported. Lara's cell phone was pinged just after 6:30 a.m. on I-5 about 30 miles north of Redding.

Bend Police Lt. Clint Burleigh confirmed Lara had been taken into custody in relation to the disappearance. He also told NewsChannel 21 that Sawyer was not with him at the time of the arrest.

"The investigation is fluid and more information is being learned frequently," Burleigh wrote in a news release update, but added that more details would be provided "as information is able to be released."

Meanwhile, back in Bend, close to 200 people turned out Tuesday morning for a search for Sawyer organized by the Destiny Search Project, which also released a statement regarding the police investigation.

They said the family is "heartbroken over the news overnight in this case" but added, "We will still be launching a volunteer-based search to find her and bring her home."

"Information gathered by investigators during the day has changed the type of investigation from a missing person to a homicide investigation," Burleigh wrote.

Burleigh declined to be more specific about the ongoing investigation, but confirmed one of the Redmond locations searched was a home near SW 33rd Street and Obsidian Avenue.

There, neighbors told NewsChannel 21 they had seen numerous police much of the day, and that they had been asked questions about who lived at the home and what they knew about them.

An armored vehicle was on the scene, and Oregon State Police forensics unit showed up late in the day as bags of evidence were seen being removed from the home.

In the public alert about Lara, Burleigh had said that "the investigation suggests Lara is likely armed and should be considered dangerous. If you see Lara, please do not approach him and call 911 immediately."

He said Lara is employed as a part-time public safety officer on COCC's Bend campus. COCC spokesman Ron Paradis said Tuesday, "We do background checks on all employees before hiring them into full-time or part-time (including irregular wage) positions."

"We really need to find this guy," Burleigh told NewsChannel 21 late Monday, referring to Lara. "My gut tells me he's out of the area," quite possibly in the Portland area, so police were being alerted statewide and media asked to show his photo.

"The last thing we wanted was for this to end up in the direction it's going," the lieutenant added.

Monday evening, before police announced the new developments, NewsChannel 21's Jennifer Wade talked to Sawyer's parents. Her mother, Juli VanCleave, said her daughter is very close to her family, and it's very unusual to not hear from her for two days.

"She has four younger brothers that desperately want their sister home," she said.

The same could be said for thousands in the Bend community who posted and shared posters and flyers on Facebook and around the area.

Kaylee Sawyer's family made a report to Bend police around 7:15 p.m. Sunday regarding her disappearance, Burleigh said.

The family members said she had not been seen since just before 1 a.m. near the parking lot of her apartment in west Bend, near Central Oregon Community College.

Sawyer was in possession of her cellphone, but it's believed to be turned off, Burleigh said. Her car also was left behind.

Family and friends have shared the information on Sawyer's disappearance across Facebook and other social media outlets.

A COCC alert that went out via their emergency system Monday afternoon said Sawyer last was seen early Sunday morning, walking toward the college from the apartments on Regency Street. They also noted she is not a current COCC student.

The search effort will begin at 7:30 a.m. Tuesday at 21772 Repine Drive, and volunteers can come throughout the day, the group said. Volunteers are asked to come prepared for the heat, walking and being in fields and other terrain. They are asked to search for at least an hour and are welcome to take part in multiple searches.

Damon Talbot, director of operations for the group, said the location was chosen for a registration spot not due to any leads, but because a family member lives there and there is Wi-Fi and a large open space available to coordinate search efforts.

Urge to Kill is a KGW podcast following the rape and murder of Kaylee Sawyer. After celebrating a bachelorette party in downtown Bend, Oregon in July of 2016, Kaylee disappeared in the middle of the night. The horrific details of her brutal rape and killing shook the residents of the quiet town in the Pacific Northwest. Her murderer would go on to terrorize several other families in a multi-state crime spree. He said he had the “urge to kill.” Our team sat down with all of his victims who were lucky to get out alive.

Urge To Kill: Coming Nov. 5
Just after celebrating a bachelorette party in July 2016, Kaylee Sawyer disappeared in the middle of the night. The horrific details of her brutal rape and eventual death shook the residents of a quiet town in the Pacific Northwest. Her killer would go on ...