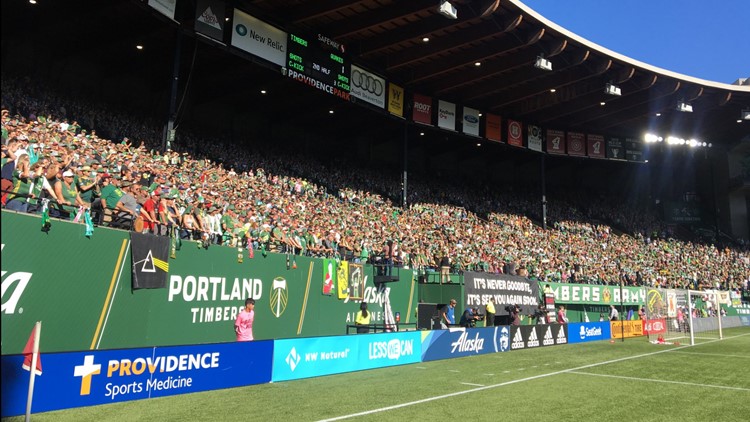 PORTLAND, Ore. — Dairon Asprilla celebrated with a flip after his goal pulled Portland in front and the Timbers went on beat the San Jose Earthquakes 3-1 on Sunday for a spot in the playoffs.

Both teams went into the final match of the regular season vying for a postseason berth. The Timbers (14-13-7) finished sixth in the Western Conference and will face Real Salt Lake in the opening round.

The Earthquakes (13-16-5) were eliminated with the loss, but Chris Wondolowski's first-half goal extended his MLS career scoring record. San Jose ended the season with a six-game losing streak.

The match was among the most closely watched on Decision Day, the final day of the regular season when all the matches are played simultaneously. In addition to the Earthquakes and Timbers, FC Dallas and the Colorado Rapids, were also vying for the final two playoff berths in the Western Conference. Dallas took the other spot with a 6-0 victory over Sporting Kansas City.

The Timbers, who also got goals from Larrys Mabiala and Sebastian Blanco, were winless in their previous five matches, setting up Sunday's deciding game.

Brian Fernandez, who has 11 goals for the Timbers this season, was suspended for the match because she was shown a red card in last weekend's 2-2 draw with Sporting Kansas City.

Portland also was without Diego Valeri because of a calf injury, as rumors continued to swirl about whether the Timbers' captain would be back with the team next season. Valeri is seeking a contract extension with the team.

San Jose defender Tommy Robinson was sent off during last week's loss to the Seattle Sounders and wasn't available to play.

Mabiala scored in the 29th minute, taking a cross from Jorge Villafana. He celebrated his second goal of the season by running to the sideline and tackling teammate Claude Dielna in front of the bench.

Wondolowski equalized for the Earthquakes 10 minutes later on a diving header from close range that popped up and hit the crossbar before falling into the goal.

Wondolowski leads San Jose with 15 goals. He is the all-time leading scorer in MLS with 159 goals, surpassing Landon Donovan, who had 145. He also leads the league's all-time list with 44 game-winning goals, and 73 road goals.

The 2012 league MVP and two-time Golden Boot winner is in his 15th season in MLS.

The Timbers had several good opportunities early in the second half, including a free kick from just atop the penalty area, but couldn't find the net until Asprilla's goal in the 59th minute. Asprilla's first attempt was stopped by San Jose goalkeeper Daniel Vega, but he buried the rebound.

Blanco scored on a free kick that he put over the wall in the 75th minute.

The Earthquakes are 0-8-3 against the Timbers in Portland.