Proposed plan by MLB could be devastating for Salem-Keizer Volcanoes

If approved, Salem-Keizer would lose their affiliation with the San Francisco Giants

KEIZER, Ore. — Major League Baseball is looking to dramatically improve facilities in Minor League ballparks and have more geographically located teams. One of the first proposals of the Professional Baseball Agreement, which binds the two entities, suggests eliminating 42 minor league teams across all 17 leagues.

On the list, according to multiple media outlets, is the Salem-Keizer Volcanoes.

He says the fact that the team made the list baffles him.

"We're still mystified by it. The biggest thing is, we were never given and still haven't been given any justification why. Why the Salem-Keizer Volcanoes?"

Walker has been with the San Francisco Giants organization for 25 years. He moved the team from Bellingham, Wash., in 1997 after a similar issue about bringing the facilities up to par with MLB standards. He says the city of Bellingham wasn't willing to fork out the money for improvements, so he packed up and left.

Keizer had the land and the Volcanoes built the stadium. Mayor Cathy Clark said the Volcanoes moving to town was an economic boon for what would become Keizer Station.

"The Volcanoes are so important in our community. We love having them here. We love the ball players here. This is a great family venue," Clark said.

The mayor said that when news came down that Salem-Keizer was on the chopping block, she too couldn't understand.

"That was a gut-punch. When I first heard that anybody was even thinking about it, I thought, 'Are you crazy?'"

The Volcanoes draw about 2,200 fans per game. In 2017, the crowd more than doubled for a game against the Hillsboro Hops. Over 5,000 fans showed up and it became the first game to be delayed because of the solar eclipse. Walker says MLB doesn't care about attendance. 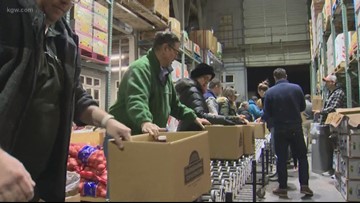 So the biggest question Walker and Clark have is why. Why the Volcanoes?

Until Walker gets his answer, he's focused on the 2020 season, while he hopes it's not his last, he says it's supposed to be a banner year.

"I think in the short term, this is going to be good in the 2020 season. Obviously long term it'll be devastating. We're much more concerned about the devastation of an elimination of our franchise, then having a few extra ticket sales next season."

Opposition to the plan has Congress members stepping in to help. 106 members of Congress sent a letter to MLB Commissioner Rob Manfred strongly opposing the plan.

Fans have also started their own petition, quickly gaining almost 3,000 signatures in less than a week.

The Salem-Keizer Volcanoes are part of the Northwest League, a short-season Single A, San Francisco Giants affiliate.

The Tri-City Dust Devils, another team in the NWL was also on the list.