In a viral video, Oregon's Sedona Prince showed the significant differences between the weight rooms at the women's and men's NCAA tournaments. 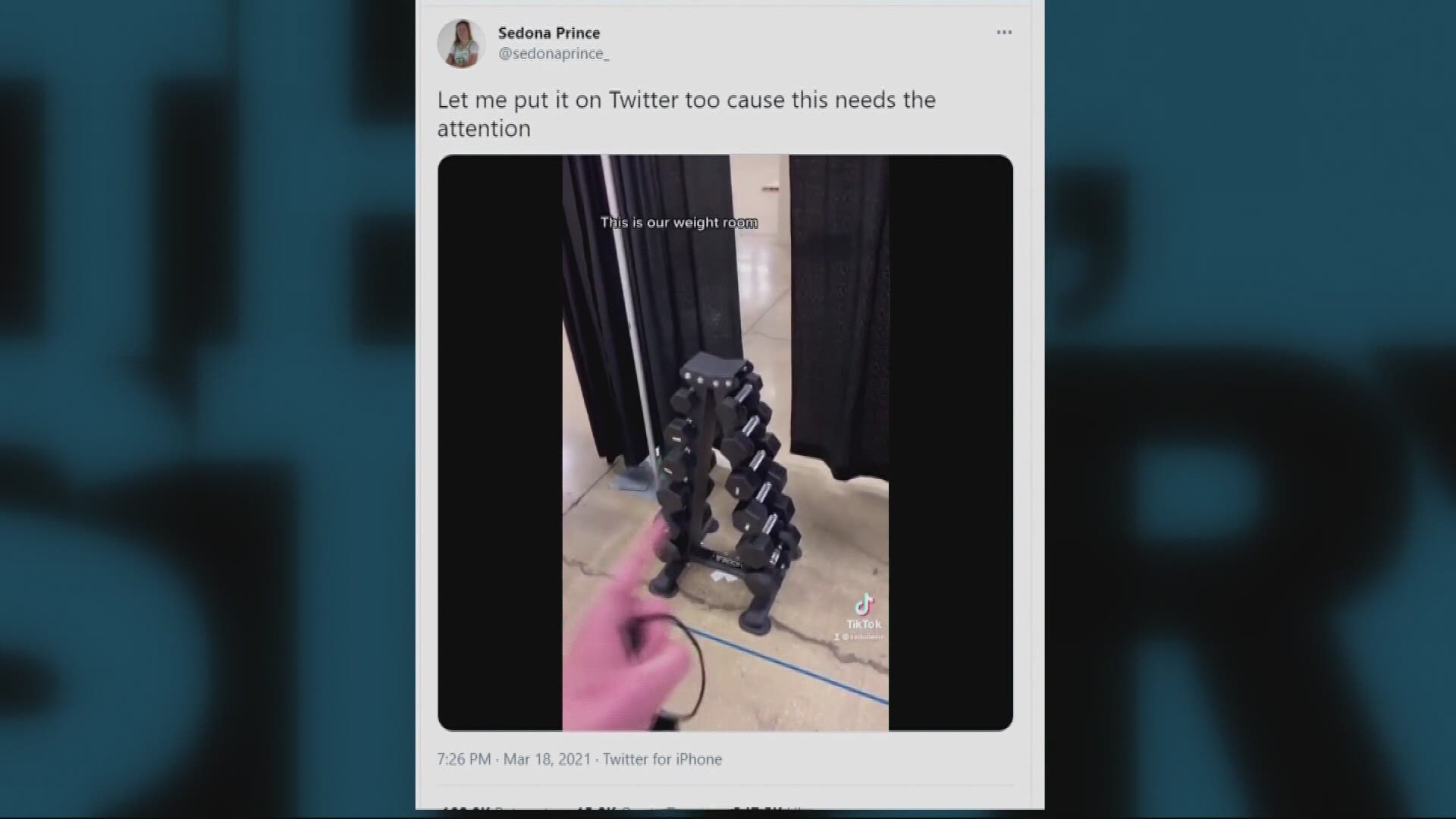 UPDATE: On Saturday, after her video went viral, University of Oregon's Sedona Prince tweeted another video of her excitedly showing a new weight room in the women's facility for this year's NCAA March Madness basketball tournament.

"Social media is powerful. Thank you for all of y’all’s support," the tweet read.

Social media is powerful. Thank you for all of y’all’s support pic.twitter.com/YR5ZNwywv6

PORTLAND, Ore. —  The NCAA’s double standard when it comes to providing workout facilities for its men’s teams versus its women’s teams at the 2021 March Madness tournament was blatantly and succinctly called out Thursday night by University of Oregon forward Sedona Prince.

Under the shadow of her now-viral TikTok video, which as of Friday evening, had 12.6 million views on Twitter and counting, the NCAA issued an apology and vowed to rectify gender-based discrepancies in how teams are treated. Athletic equipment manufacturers and retailers, including Dick's Sporting Goods, are also rushing to send free workout equipment to the women’s bubble in San Antonio, Texas.

Let me put it on Twitter too cause this needs the attention pic.twitter.com/t0DWKL2YHR

It all started with a stack of dumbbells.

“I got something to show y’all,” Prince’s 38-second video begins. “So for the NCAA March Madness, the biggest tournament in college basketball for women, this is our weight room.”

At that point, Prince points to a triangle-shaped rack of 12 dumbbells. A few seconds later, she shows a smooth pan of the men’s weight room, in their separate bubble in Indianapolis, Indiana. It’s stocked with dozens of machines, benches and free weights; the kind of facility one would expect for elite athletes playing in the biggest tournament of their lives.

“Now, when pictures of our weight room got released versus the men’s, the NCAA came out with a statement saying that it wasn't money. It was space,” Oregon’s red-shirt sophomore continues in the video. “Let me show you something else.”

She then pans the camera from the women’s practice court, to a separate, court-sized empty room with a few folding chairs set up.

“Here’s all this extra space,” she said. “If you aren’t upset about this problem, you’re a part of it.”

The support for her condemnation was immediate and staggering.

Women’s @NCAA bubble weight room vs Men’s weight room... thought this was a joke. WTF is this?!?
To all the women playing in the @marchmadness tournament, keep grinding! pic.twitter.com/K04KTv6s46

Ducks alum and WNBA star Sabrina Ionescu tweeted photos of the two set-ups, writing "... thought this was a joke. WTF is this?!?"

Wyden, who attended the University of California-Santa Barbara on a basketball scholarship, wrote the “inequality is shameful. Do better, NCAA”.

For its part the NCAA has apologized for the “blemish." In a news conference Friday, executives said staff originally thought there wasn't enough space in the women’s facility for a weight room. They didn’t say, with that assumption in mind, why they didn’t find the women a facility with the proper space.

Still, they vowed to rectify the issue.

“When we don't meet the expectation of that support, that's on me, and for that I apologize to women's basketball student athletes, to the coaches, to the women's basketball committee, for dropping the ball frankly on the weight room issue in San Antonio,” said Dan Gavitt, the NCAA’s senior vice president of basketball.

By Friday afternoon, it became clear weights weren’t the only issue.

From what I have been shown it appears the swag bags that the Men receive from the @NCAA are much more substantial than the Women as well. @ncaawbb @marchmadness. C'mon NCAA do better. Be better! pic.twitter.com/tDRjI9e5UJ

Photos published by the Washington Post show NCAA swag bags doled out to men's teams are larger than those given to the women. The news outlet also reported Friday that, while all players are undergoing frequent COVID tests, those given to the men produce results faster. The difference put the women in greater danger of contracting COVID and infecting their teammates, said Connecticut women’s coach Geno Auriemma in a news conference.

A headline in the Wall Street Journal Friday read "Women’s March Madness is growing in popularity and undervalued."

“You know, you shake your head and think, ‘Oh, it just doesn't have to be this hard,’” said Ann Schatz, in an interview Friday.

In under 90 seconds @AnnSchatzPdx, Portland's 1st female sportscaster w/ credits like @espn & @Pac12Network, slams @NCAA for its women's "weight room", then adds, one aspect of this gives her hope. #HeyDan pic.twitter.com/mUUkQH1XYD

Decades ago, Schatz shattered glass ceilings as Portland’s first female sportscaster. Since then, she’s called countless games for ESPN, the Pac-12 Network, Portland Thorns and others.

She’d been following the headlines as she prepared to call an Oregon State women’s soccer match in Corvallis Friday, as part of OSU’s Rivalry Week.

Schatz added she’d be watching San Antonio over the weekend to see if the NCAA indeed makes good on its promise to level the playing field.

“Here's what I love. I love the fact that this is troublesome and not just to the women who it's affecting and impacting. I love the fact that media outlets are looking at this saying, 'Hey, wait a second. This isn't right,’” she said. “Because not too long ago, what we would have heard was ‘Can't you just be happy with what you have? Isn't this just good enough? Go to an LA Fitness, and figure it out. Oh my gosh, quit whining.’ That's what we would've heard not too long ago. Not anymore.”