Reliving the magic of the Blues' Stanley Cup parade

You can catch a special re-broadcast of our coverage of the parade Sunday night a 8 p.m. 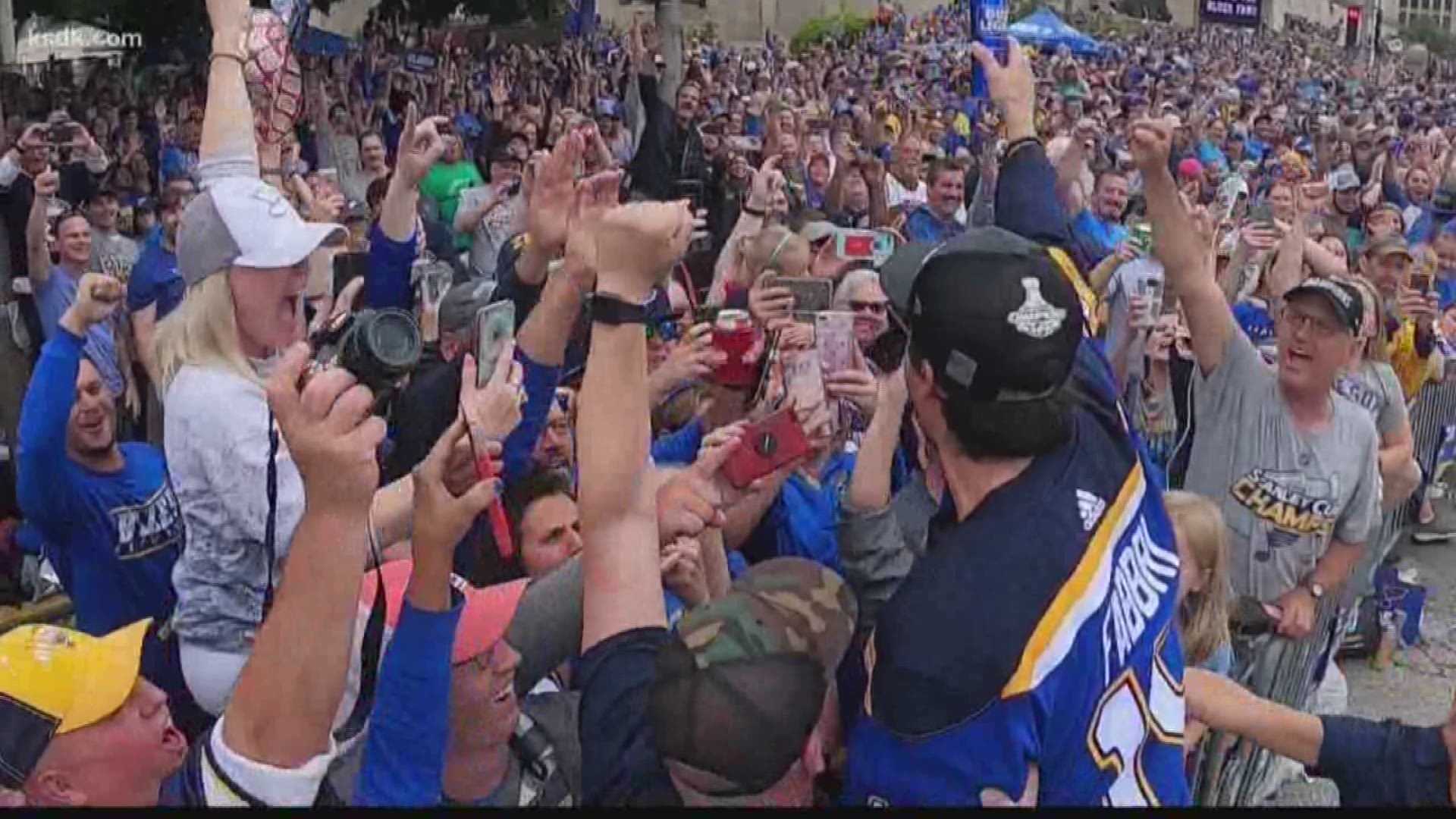 ST. LOUIS — Do you remember your first time?

Like the parade for the Stanley Cup champion St. Louis Blues, for example. Always talked about, and after 52 long years, finally realized.

It’s like a wedding day – you want to take everything in so you will remember every detail, but it goes by so fast it overwhelms the senses and years later someone will remind you of a moment and you’re like, “Oh yeah.”

So it was a year ago this week that we had that parade. In this year no one saw coming one nice opportunity has been the chance to look back on better times so we can get through these rough ones.

Sunday night at 8 p.m. we can all relive that wonderful Saturday in 2019 that was the capper of the greatest hockey season we’ve ever experienced.

Whether you saw it along the parade route or set up camp down underneath the Arch or watched it on television or even if you just missed it, you can see how much of that day comes back from your memory banks; or maybe makes you think, “Oh yeah, that’s when Brett Hull reminded us that We. Went. Blues.”

Someone had to go back and decide how to condense nearly four hours of hoopla into a two-hour window, so some stuff had to go. In this case, what had to be shown was the starting point and then it was built up around those moments. Like, Rene Knott getting his foot run over by the car Laila Anderson was in. Oh, Frank Cusumano getting a champagne shower along with folks in the crowd – that was a must. That’s the beauty of getting to see all four hours all over again; those little sidebar moments were forgotten soon after they happened but on a second viewing come rushing back.

How many remember that the weather forecast for that day was right on – until it wasn’t? Rain was predicted and rain happened; overnight and all morning until it was time for the parade line to begin forming and then it stopped. Before too long the sun came out and drenched the city in a totally different way.

Seeing the parade live from the control room of a television station has its both good and bad. From that vantage point you can see what’s going on from different points along the parade route – some that make it on air and some that don’t – along with the crowd gathering in anticipation of the ceremonies and celebration under the Arch.  Those are the good things. 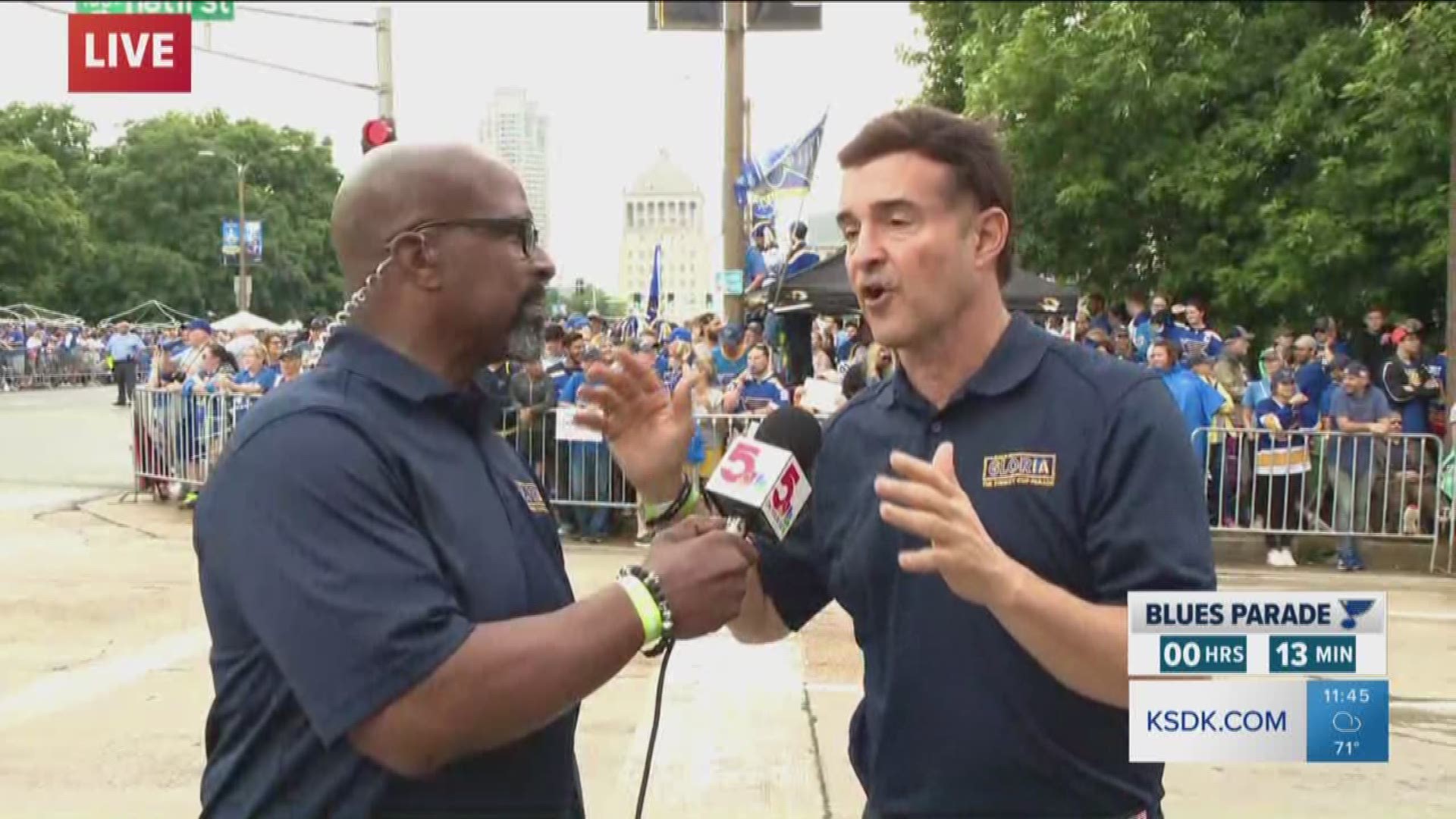 Instead of bad, maybe unfortunate is a more accurate word. If the glass were half-empty you saw from far away the many times the players got off their vehicles and took in the parade on foot, glad-handing and celebrating right there with the crowd, while others – Alex Pietrangelo, Ryan O’Reilly, Alexander Steen, to mention a few – brought the Stanley Cup right there (right there!) for an adoring fanbase to touch and then to tell everyone they know that they did.

As a side note, Stan Musial used to joke that there were only ten thousand people at Wrigley Field on the day he got hit number 3000, but ten times that number told him they were there  to see him do it. I wonder how many of the half-a-million people downtown that day have bragged that they touched it, whether they were anywhere nearby or not? (Oh, what does it matter? Maybe as the esteemed philosopher Mark McGwire once said, we all touched it with our hearts.)

No matter where you saw it from, that spontaneous decision of sharing the joy was a pretty cool gesture. Unprecedented even, but not surprising that it happened here.

Seeing Patrick Maroon revel in it all, his son Anthony, Robin to his dad’s Batman, was somehow like the neighbor down the street getting the Heisman Trophy or winning the Super Bowl. It’s cliché, but Pat Maroon is one of us; one of a precious few from our town who have their names on the precious Cup. What a movie script we have here: player comes home so his son can see him play and he goes and wins it all in his first year home to top it off. Hollywood is waving that script away as being too ridiculous, but it did happen.

While you had to be excited for the players, and for the coaches and staff, it was really special for the Blues alumni – Plager, Patey and Federko; Chase and Cavallini, Tkachuk, Janssen, and John Kelly, too – getting to feel that championship feeling for the first time at the highest level. Even an Al MacInnis, who had done it in Calgary, or Larry Robinson experiencing it for the tenth time, one could feel their happiness and excitement at knowing they were part of an organization that won the last game of the season.

When a great player talks about his career, not one refers to the money that goes along with their championships. As former coach Bobby Bowden famously answered what was important to him, he said, “Rings. It’s about the rings.” Even more specifically, hockey players don’t even talk about the rings. They talk about hoisting the Cup. Holding the Cup. Kissing the Cup. Getting their name on the Cup. Tangible evidence as to why the NHL has the most arduous playoff road in sports is what the reward is. In this case, it’s not personal reward; it’s that 36-pound Holy Grail that you won as a team and all of the team gets their names engraved on it for eternity.

Still, it’s hard to doubt Plager saying that while he got his parade at long last after 52 years, it was the multi-decade season ticket holders and the die-hard fans that never lost faith that he was happiest for. This was one party that the city threw for the fans.

As the parade route moved along toward the Arch grounds, you could have turned the afternoon into a drinking game (which many of the players did anyway) for every time someone was asked what it all meant to them and then replied that it was unbelievable. Or incredible. Or that they were at a loss for words. O’Reilly had the most eloquent answer: it was simply the greatest day of his life. How many there could raise their hands and say, “Me too?”

Then the focus shifted from Market Street to the podium in the Gateway Arch National Park and the joy continued. Brett Hull and his signature version of “Gloria” was something no one’s ears will ever be able to forget. Laila continuing her place amongst “her boys” and kissing the Cup one more time. Jordan Binnington taking center stage as the capper to his unreal debut season, and the unassuming owner, Tom Stillman coming out to lift the Cup. Every one on stage dancing to “Enter Sandman,” as the day fades to a close.

Well, as we all know this was a dream come true after years of nightmares.

It finally happened, and you can re-live it on Sunday night.

Feel the first time all over again. 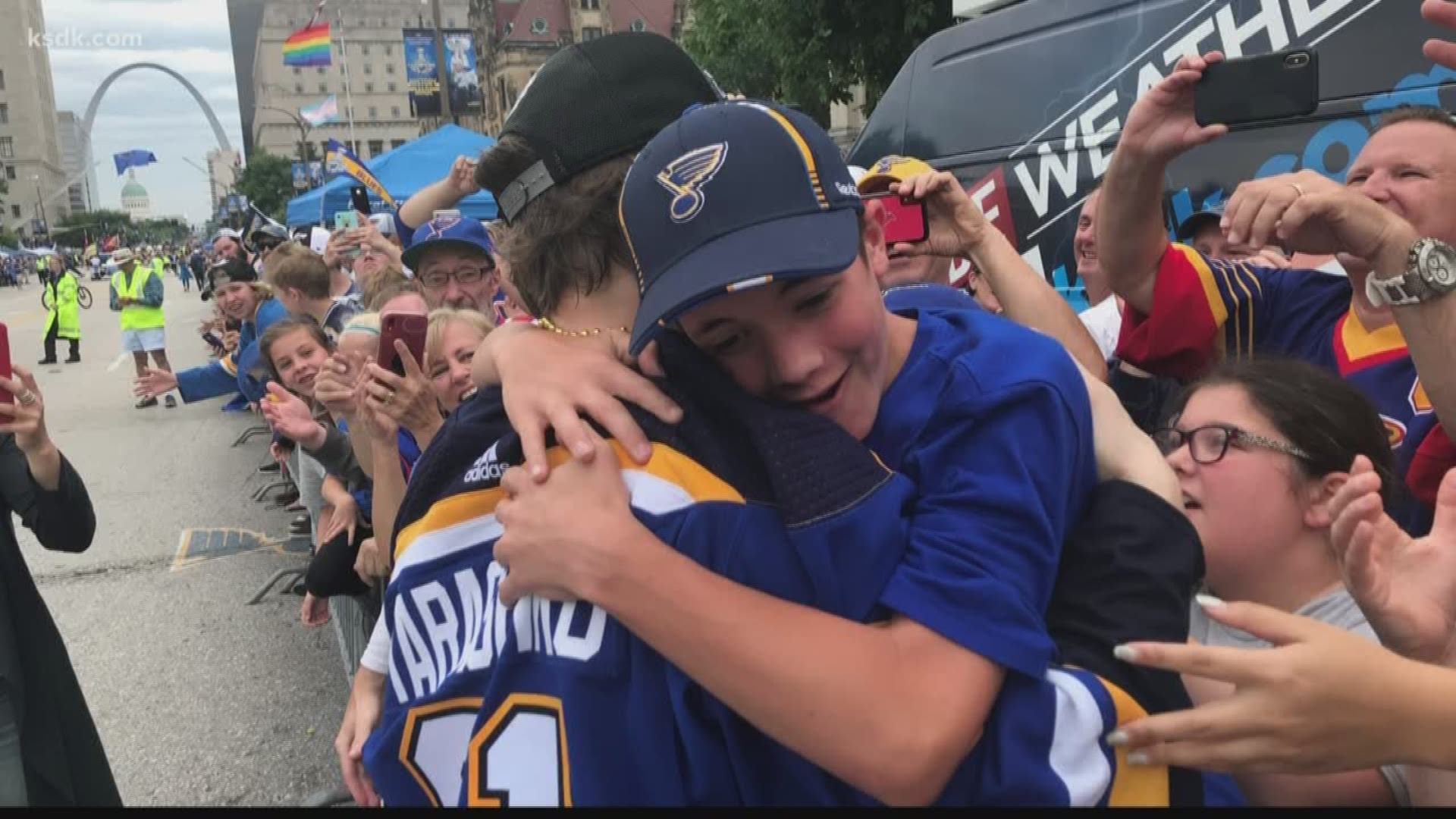