Russell Wilson hit Tyler Lockett for a 44-yard touchdown on the first play of the fourth quarter, and the Seattle Seahawks withstood a career day from Andy Dalton to beat the Cincinnati Bengals 21-20 on Sunday.

Wilson and the Seahawks struggled offensively for most of the game, but got the big plays they needed on a day Dalton looked great running new coach Zac Taylor's offense. Wilson was 14 of 20 for 196 yards and two scores, including a 10-yard TD pass in the first half to Chris Carson, who broke three tackles on his way to the end zone.

Wilson's numbers were pedestrian compared to Dalton's. The veteran threw for a career-high 418 yards and two first-half touchdowns to John Ross. But the Bengals failed to score on three possessions inside Seattle's 36-yard line in the third quarter.

Ross, who had 210 yards receiving all of last season, finished with seven catches for 158 yards. He caught a 33-yard touchdown on a flea-flicker midway through the second quarter and hauled in a 55-yard TD pass with 7 seconds left in the first half after Seattle safety Tedric Thompson misjudged Dalton's pass.

Cincinnati led 17-14 at halftime, but its missed chances in the third quarter made the difference.

Carson fumbled on the first play of the second half, but three plays later at the Seattle 12, Dalton lost control of a wet ball and gave it back to the Seahawks. Kicker Randy Bullock, who hit from 39 yards in the first half, hooked a 45-yard attempt. And the Bengals were stopped on fourth-and-1 at the Seattle 36 late in the quarter when Giovani Bernard was stuffed for no gain.

For all the statistical advantages Cincinnati had, it was only a three-point lead going to the fourth quarter.

And it was gone in an instant.

After going without a target for the first three quarters, Lockett came free down the seam on a play-action fake and hauled in a touchdown catch on the first play of the fourth quarter to give Seattle a 21-17 lead. Cincinnati again failed to find the end zone and settled for a 27-yard field goal from Bullock with seven minutes left to pull within 21-20.

Seattle went three-and-out on its next possession and Dalton had 5:30 to work with. He converted one third down but had another third-down pass batted down by Quinton Jefferson, and Cincinnati punted back to Seattle with 3:22 left. Carson rumbled for 21 yards on third-and-1 with 3:13 left and Cincinnati out of timeouts. The Bengals got the ball back with 21 seconds left, but Dalton was sacked and fumbled.

Dalton was 35 of 51 passing and connected with eight different receivers. His previous career high was 383 yards passing against Baltimore in 2015, a game the Bengals won 28-24.

Jadeveon Clowney had a sack in his Seattle debut, chasing down Dalton along the sideline in the fourth quarter. Clowney's presence opened up opportunity for Quinton Jefferson and Al Woods, who both had big games on Seattle's defensive line.

Cincinnati running back Joe Mixon left in the third quarter with a left ankle injury and did not return. Mixon had just six carries for 10 yards. Seattle lost tight end Will Dissly to a right knee injury in the fourth quarter and special teams standout Neiko Thorpe in the first half with a hamstring injury.

Seahawks: Seattle plays its road opener at Pittsburgh next Sunday. 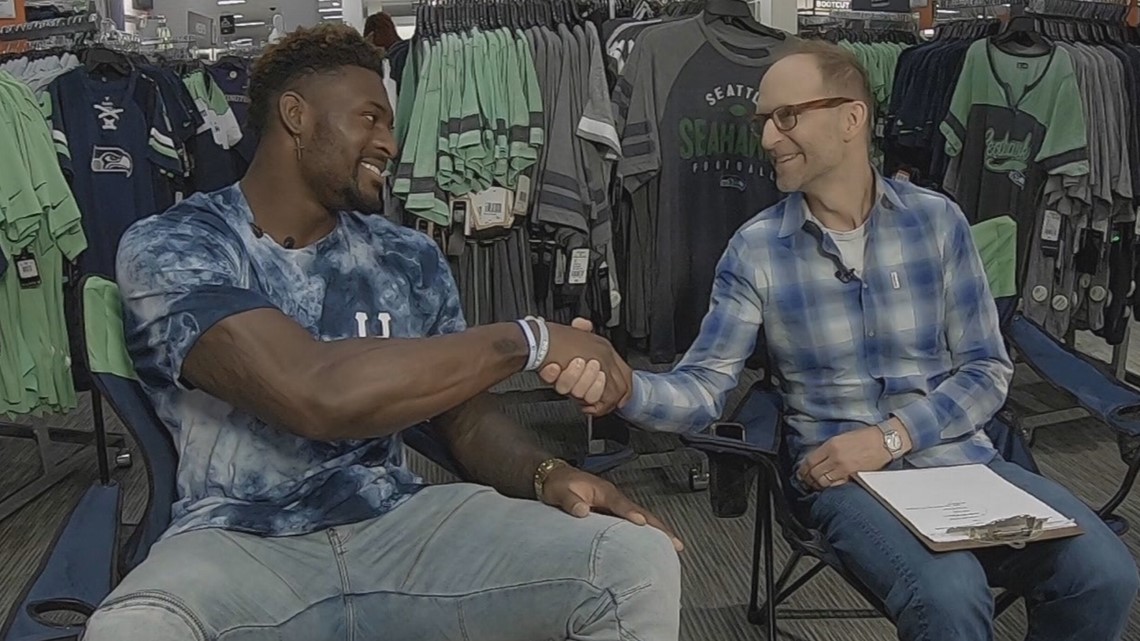 Up close and personal with Seahawk DK Metcalf
SEATTLE - Can't help but notice the shoes. DK Metcalf shows up for our chat at Southcenter Mall in some serious white skips, high-tops covered in spikes. He's there to surprise teachers with a shopping spree, thanks to JCPenney. "I'm into these shoes. I like this brand.