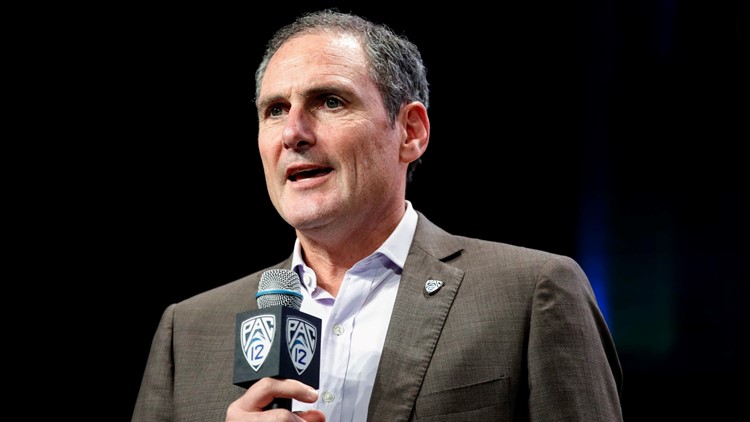 LOS ANGELES — Larry Scott is acutely aware that the Pac-12 has been the punching bag of the power five conferences the past couple years — on and off the field.

The beleaguered commissioner is hoping the programs get back on track after conference schools made the College Football Playoff only once the past four years and went 2-4 in New Year's Six bowls. As for what Scott can control, he's taking significant steps to address deficiencies in officiating.

Scott said during the conference's media day Wednesday that the league will implement all of the recommendations from a Sibson Consulting report examining everything about the football officiating process.

The key recommendations include the head of officiating reporting directly to Scott rather than the football administrator, more consistency in grading and training from officiating supervisors and more transparency from the conference office in terms of questionable calls.

Scott said Woodie Dixon will no longer be involved in any officiating matters. Dixon called the league's replay command center and overruled a targeting penalty in last year's Washington State-USC game. It was that decision that damaged the league's credibility and was the final impetus for an outside consultant.

"That was a real straw that made us all wake up and realize we have work to do," said Arizona State athletic director Ray Anderson, who also oversaw the report. "Those things can not be allowed to go on."

Scott also said there have been changes with some supervisors. The report found that they generally lacked recent on-field and NFL experience as well as a lack of commentary and specifying errors made.

The most important change for fans might be the league office being more accountable for controversial calls. Anderson said they are not ready to go as far as having an officiating Twitter account, like what the SEC is planning, but being more nimble to immediate controversies, such as last year's replay fiasco.

"Those types of egregious examples where we have to come out and say that a mistake was made rather than come out Monday or Tuesday we should be able to address in real time," Anderson said. "We've got to make sure they are real, significant issues we can talk about."

Anderson also raised the possibility of director of officiating David Coleman appearing on the conference Website or Pac-12 Network to discuss calls from games the previous week.

To prevent a repeat of last year, the league will adopt a new replay manual that better organizes processes and procedures that should be used.

UCLA coach Chip Kelly said the most important thing to him is consistency, which he compared to driving.

Scott is hopeful that the conference can rebound on the field. Seven of the 12 coaches have been with their programs three years or less.

"We have to acknowledge many of the criticisms that the conference has received, and I can tell you that collectively we've taken a hard look at everything about how we're operating," he said. "I think the building blocks for our football programs are coming into place, and our teams are going to have amazing opportunities to prove themselves very early in the season."

The Pac-12 will be adding a new bowl game to its postseason lineup beginning in 2020.

The Los Angeles Bowl will feature a matchup between teams from the Pac-12 and Mountain West in the new NFL stadium under construction in the LA area. The Pac-12's commitment to the game runs through 2025.

"We are thrilled to partner with the Los Angeles Bowl and bring a Pac-12 presence to the new state-of-the-art facility at LA Stadium, in one of the biggest markets right in our footprint," Commissioner Larry Scott said.

The game was announced Wednesday during Pac-12 media day.

The Pac-12 may try a new scheduling approach this season.

Commissioner Larry Scott said Fox and conference athletic directors are in preliminary talks about morning kickoffs for some games, which would put them in the network's key 12 p.m. Eastern timeslot.

Any morning kickoffs, which would be at 9 a.m. Pacific and 10 a.m. Mountain, would be voluntary and not dictated by Fox.

"That would be new and somewhat out of the box but I've tried to put everything on the table," Scott said. "I think there are some schools and markets that might respond positively."

Coaches are split about the possibility of a morning kickoff. UCLA's Chip Kelly said the time doesn't matter while Stanford's David Shaw said he would be somewhat resistant.

"All the studies we've all read and conducted ourselves on our campus, our sleep studies, it is better for young people to perform athletically if they get a full night's sleep," Shaw said. "And I don't know that you can find any group of 18- to 22-year-old young people that are going to go to bed at 10 o'clock at night to get up at 6 o'clock in the morning to make sure they can perform athletically."

Commissioner Larry Scott announced the decision Wednesday at the start of Pac-12 media day in Hollywood.

The league title game has been played at Levi's Stadium in suburban Santa Clara, California, since 2014. The event has struggled for solid attendance in the past half-decade, including a noticeably empty stadium for Washington's win over Utah last year.

After the upcoming season, the game will move to party-friendly Las Vegas and the Raiders' new stadium, which is still under construction just west of the Strip.

The Pac-12 men's basketball tournament has been played in Las Vegas since 2013, and conference leaders have credited the move with boosting attendance.