Use KTVB's interactive timeline to get caught up on the last two weeks of news on the search to replace Bryan Harsin. 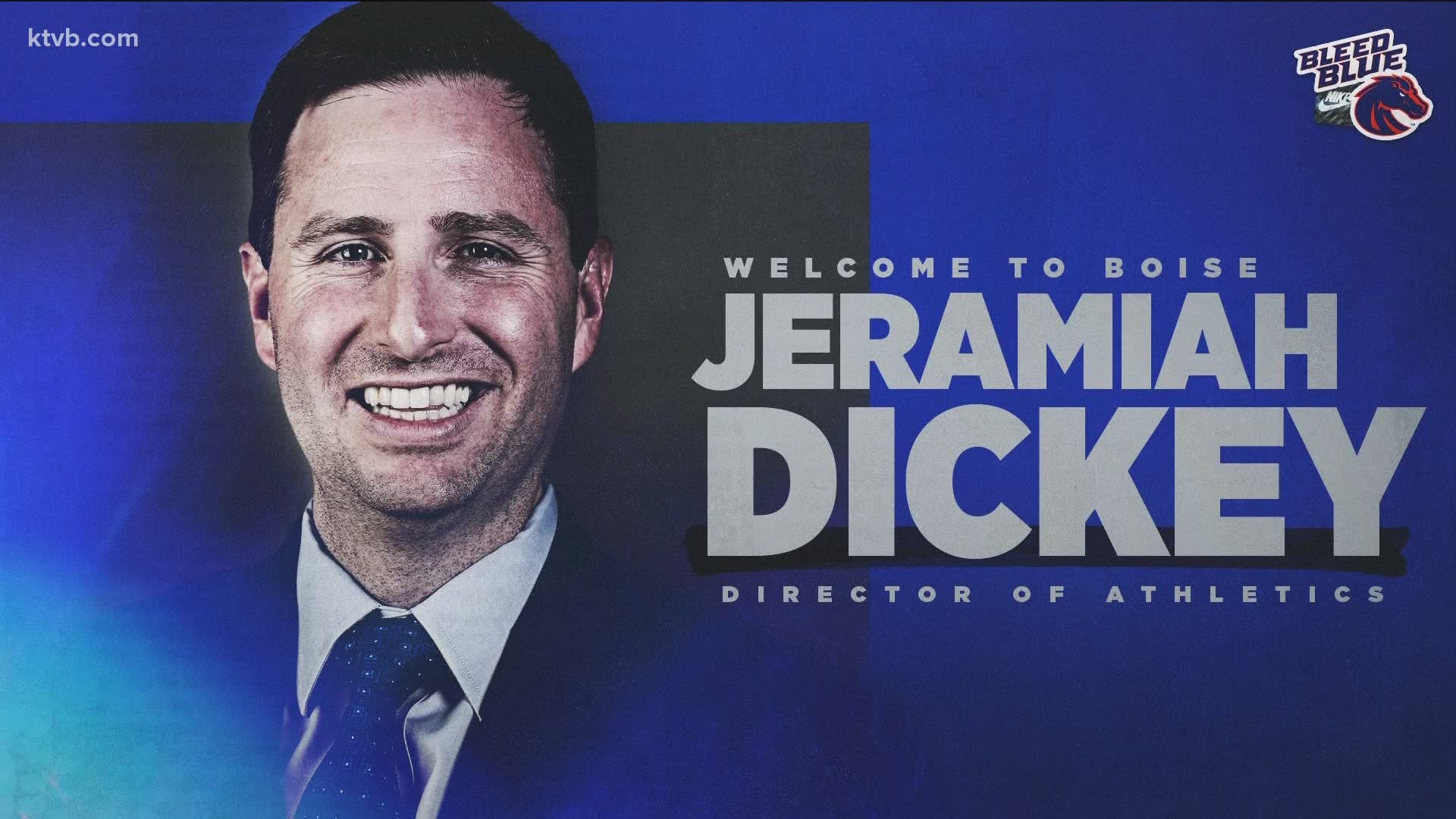 BOISE, Idaho — With each passing day since Bryan Harsin left the Boise State Broncos to become the next head coach of the Auburn Tigers, Bronco Nation becomes antsier about who will become the Broncos' next head football coach.

It has been just over two weeks since Harsin left for Auburn but in this day and age, it likely feels like several lifetimes since then.

Boise State faithful have likely been checking the latest rumors and reports on the search for Bryan Harsin's replacement each morning and night, thinking one day it will be Dallas Cowboys offensive coordinator and Bronco legend Kellen Moore as the next head coach and thinking it's Oregon defensive coordinator Andy Avalos another day.

With all of the various reports on who will be the next coach, guessing that Dan Hawkins might give coaching the Broncos a second go wouldn't seem too far-fetched at this point.

To get caught up on all the news from the last couple of weeks, use KTVB's interactive timeline below for a brief breakdown for each development. Scroll down further to read KTVB Sports Director Jay Tust's in-depth breakdown of each chapter in the search for the Broncos' next head coach.

Auburn University officially announces Bryan Harsin as the 28th head football coach in the 127-year history of their program.

Through his new university, Harsin issued this statement that evening:

"I'm incredibly excited and humbled for the opportunity to be at a place like Auburn University. I knew it would take a special opportunity to get me out of Boise and Auburn is exactly that, the chance to compete at the highest level for one of the greatest programs in college football. I have a tremendous amount of respect for the coaches and players in the Southeastern Conference, but am ready to help build a foundation at Auburn where we can consistently compete for championships. I want our program to make Auburn proud both on and off the field with consistent excellence. I'm very grateful to Allen Greene and Dr. Gogue for this opportunity. Kes, our kids and I can't wait to meet the Auburn family and get to work! War Eagle!"

“Bryan Harsin has contributed to Boise State University as a student-athlete, as an assistant coach and in his last seven seasons as our head coach. We are proud of what he has been able to accomplish on The Blue, and we wish him the very best of luck at Auburn.

Once A Bronco, Always a Bronco.

Boise State has been on a stunning trajectory for decades and has effectively built on our previous successes. Each of our head coaches has used his unique talents to enhance the excellence of this program — an excellence we have all come to expect — and we are confident that our next coach will do the same. This is an exciting time for Boise State and Bronco Athletics. A national search for our next head coach will begin immediately.”

“Coach Danielson is a strong leader on and off the field and is well-respected among our student-athletes, coaches, staff and administration,” Carney said. “He is prepared to step in and lead this program as we search for a permanent head coach.”

Danielson joined the Bronco coaching staff prior to the 2018 season. He worked specifically with the STUDs his first two years in Boise, before shifting his focus to the defensive line.

“I am incredibly humbled by this opportunity,” Danielson said. “Boise State has been a great place for a long time, and I want to make sure our current student-athletes and the student-athletes that are committed to us know that it will continue to be great. The best is still to come!”

Later that day, Boise State also announced that they would partner with Collegiate Sports Associates (CSA) to identify their next permanent head football coach.

The university had already been using the search firm to pinpoint the hiring of their new athletic director. Boise State president initially targeted March 2021 as the hiring date for that position, but the sudden head coaching vacancy created a new sense of urgency and called upon them to accelerate the process.

“College athletics is a very fluid environment,” said Tromp. “We will aggressively position ourselves to build on the national excellence of Bronco Athletics. We are pleased to work with CSA in both of these important searches. I am confident that CSA will help us identify high caliber candidates who will continue to elevate our programs. I am excited to recruit an outstanding athletic director and head coach to lead us forward.”

One day after Dallas head coach Mike McCarthy claimed he “probably said too much,” Cowboys offensive coordinator Kellen Moore confirmed his interest in the head coaching vacancy at his alma mater.

“Obviously Boise is a unique one for me, special to me. I love that place. Just going through the process right now, obviously focused on this [upcoming] game. We’ll kind of let all this play itself out and we’ll see where it’s at.”

Moore, 32, has experienced a quick rise in the coaching ranks. After retiring from the NFL as a player following the 2017 season, he was named the quarterbacks coach in Dallas the following offseason. On Jan. 31, 2019, the organization then promoted him, making him the youngest offensive coordinator in the NFL at the time.

The move proved wise. Despite several injuries this year, including a season-ending ankle injury to starting quarterback Dak Prescott in Week 5, the Cowboys still rank No. 1 in the NFL in total yards over the last two seasons.

“Yeah, I want to be a head coach,” replied Moore when asked about his future, “but I think like anything, really I’m focused on this job right now, and again, we’ll go through this process and we’ll see where it’s at.”

DECEMBER 29 – AVALOS WAITING ON THE 'FORMAL' PROCESS TO START

“I get it, I understand, that’s my alma mater,” Avalos told reporters. “[I put] a lot of blood, sweat and equity into that university, but ultimately, there’s been no process. I’ve not been engaged in that process.”

Avalos, who is in his second season as the Oregon defensive coordinator, quickly shifted the focus on the conversation back his immediate task at hand, getting the Ducks ready to play in the Fiesta Bowl.

“We’re very blessed to be in this opportunity here,” said Avalos, before eventually reiterating, “again, there has not been any formal interaction there, so this is where our focus is right now.”

Less than a week after he publicly expressed interest in potentially returning to his alma mater, Dallas offensive coordinator Kellen Moore withdrew his name from contention when he agreed to a multi-year contract extension to remain with the Cowboys.

"I will no longer be pursuing the head coaching job at Boise State," Moore said. "I love Boise State. I will always root for them, and I hope one day to be a part of the program again."

Moore is a Bronco legend. It’s been over a decade since he threw his last collegiate pass, and he still owns the all-time NCAA wins record, going 50-3 as the starting quarterback at Boise State.

He’s also the second youngest offensive coordinator in the NFL and is locked into a great situation.

"I am very excited to remain with the Dallas Cowboys as the offensive coordinator," said Moore. "We are building something special here in Dallas. I am thankful to the Jones family and Mike McCarthy for providing me with the opportunity to coach these special players. I am excited for us to put it all together and finish the job."

That was not the only substance news of the day.

Later that even, Boise State announced that the search to find their next director of athletic had finally ended.

“Throughout this process, I have spoken with many of Bronco Athletics’ most important past leaders and supporters for their insights. Their guidance played a key role for me,” said Tromp. “Our dedicated committee forwarded a pool of candidates whose caliber was stunning — people who represented some of the best athletics programs in the country and who wanted the opportunity to lead our Broncos. We stayed true to the profile we had built in concert with the department and our supporters: Jeramiah Dickey not only matched that profile perfectly, he rose to the top of the candidate pool. His blue-collar work ethic, humility, rich past experience, and extraordinary performance make him an excellent fit for advancing Boise State.”

“I am excited and humbled by the opportunity to lead Bronco Athletics,” said Dickey. “There is no question the Boise State national brand resonates at the highest levels in college athletics. The successes surrounding all of Bronco Athletics are well known. I am looking forward to working with President Tromp as we build on that solid foundation of all of our programs.”

Pitman has been with Harsin since the start of his head coaching career. They were together at Arkansas State in 2013, then again at Boise State from 2014-20.

"Coach Pitman brings three decades of collegiate strength coaching and player development to the Auburn Family," Harsin said. "He has been an instrumental part of many championship teams and players he has worked with leave their time with him praising Coach Pitman for developing them as football players and men. We know his approach in the weight room and other performance areas will make our players better all-around, especially as he specializes with our men upfront on the offensive and defensive lines."

"I am extremely honored to work for Coach Harsin and our Auburn family," Pitman said. "Coach will develop our student athletes into Auburn men that we can all be proud of. War Eagle!"

JANUARY 6 – REPORTS OF DANIELSON'S DEPARTURE MAY BE 'PREMATURE'

Is expected to arrive at Auburn at some point in the coming days. https://t.co/l2L3imwci7

KTVB then learned that report was “premature,” and while offered a position at Auburn, it was too early to assume a decision was made, according to a source.

And again, despite yesterday's report of another #BoisesState defensive assistant joining Harsin's staff at Auburn, I'm told, it's premature to assume how it plays out.

There is still a big hire that needs to be made at #BoiseState. Until then, the situation remains fluid. https://t.co/s7UBrVtXiM

Danielson has been at Boise State since 2017. He was initially brought on to the staff as a graduate assistant, but he was elevated to a full-time roll the following season. In addition, when Harsin left for Auburn, Danielson was immediately appointed the Broncos’ interim head coach.

The following day, AL.com updated their report, too.

Schmedding served as the Broncos’ defensive coordinator over the last two years. During his run as the play-caller, the Broncos ranked No. 1 in the Mountain West is sacks (58.0) and tackles-for-loss (149.0), and third in yards per play allowed (5.3).

Bedell will reunite with Harsin at their third different location today. They initially joined forces at Arkansas State in 2013, then again at Boise State from 2017-2020.

At the time of this report, those were the only known assistants leaving Boise for Auburn.