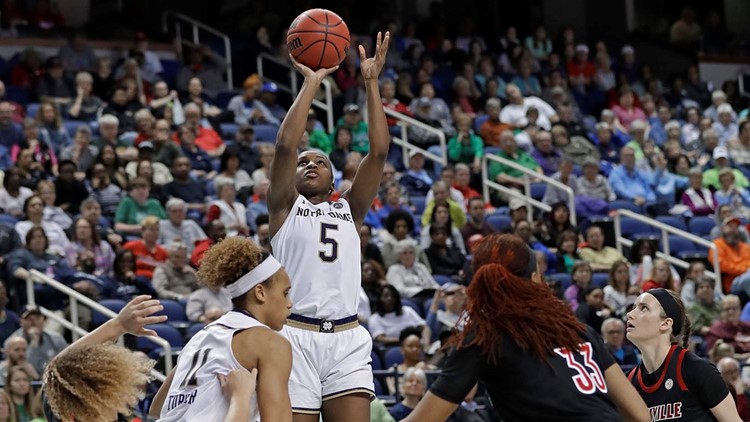 Photo by: AP Photo/Chuck Burton)
Notre Dame's Jackie Young (5) shoots against Louisville during the second half of an NCAA college basketball game in the championship of the Atlantic Coast Conference women's tournament in Greensboro, N.C., Sunday, March 10, 2019.

While the 68-team field for the men’s NCAA tournament was revealed Sunday, ESPN was looking ahead to revealing the bracket for the Women’s tournament.

But it looks like they got a little too excited.

ESPNU accidentally broadcasted the women’s bracket ahead of its official announcement slated for 7 p.m. ET Monday.

Instead, the network’s show “Bracketology” came back to commercial at 3:15 p.m. ET and began showing graphics of this year’s women’s tournament bracket, according to multiple media reports.

The official Twitter account of NCAA Women’s Basketball confirmed the mistake saying that they “regret the network’s mistake” and are working with ESPN “to prevent similar errors in future years.”

The NCAA blamed an "unfortunate technical error by ESPN."

ESPN also confirmed the error and said they are conducting a “thorough review” to ensure the mistake doesn’t happen again.

“We deeply regret the error and extend our apology to the NCAA and the women’s basketball community,” they said in a statement posted on Twitter.

ESPN is still planning to broadcast the bracket reveal, but it was pushed earlier to 5 p.m. ET, due to the mistake. A full selection show will still air on ESPN at 7 p.m. ET.

Here's what to expect on the network's selection show.