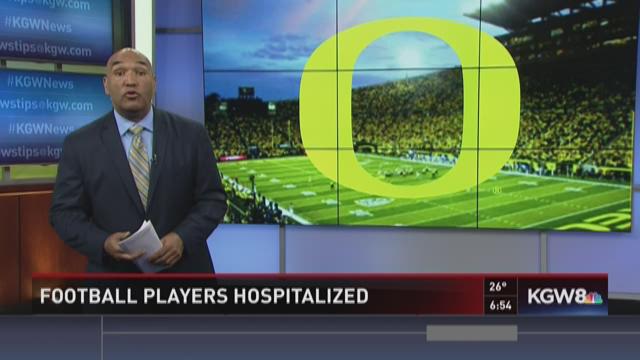 The Oregonian reported late Monday that the players remain hospitalized after being taken there late last week.

Oregon football coach Willie Taggart on Tuesday apologized on behalf of the coaching staff and athletic department for the incidents, and suspended football strength and conditioning coach Irele Oderinde for one month without pay.

“I have visited with the three young men involved in the incidents in the past few days and I have been in constant contact with their families, offering my sincere apologies,” Taggart said in a statement from the university. “As the head football coach, I hold myself responsible for all of our football-related activities and the safety of our students must come first. I have addressed the issue with our strength and conditioning staff, and I fully support the actions taken today by the university. I want to thank our medical staff and doctors for caring for all of our young men, and I want to apologize to the university, our students, alumni and fans.”

The school didn't immediately identify the players who were hospitalized. The Oregonian identified them as offensive linemen Doug Brenner and Sam Poutasi, and tight end Cam McCormick.

The newspaper reported that Poutasi's mother said her son has been diagnosed with rhabdomyolysis, a condition that occurs when muscle tissue breaks down and leaks into the blood stream. The condition can cause kidney damage.

In addition to the suspension, a statement from the university said Oderinde will from now on report to the director of performance and sports science, and all future workouts have been modified.