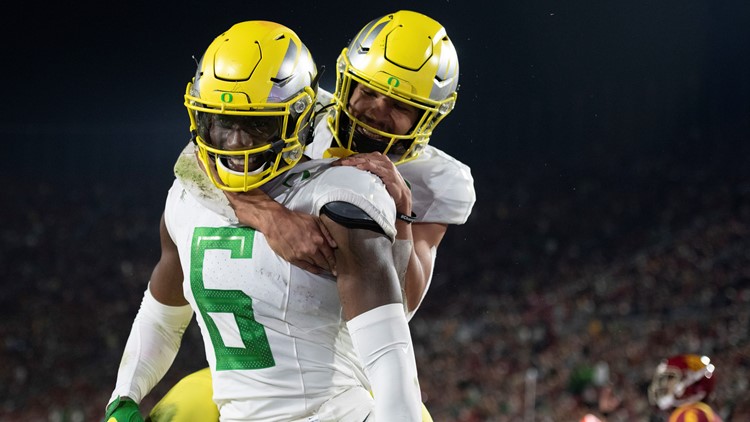 LOS ANGELES — Justin Herbert passed for 225 yards and threw three touchdown passes to Juwan Johnson in the second half, and No. 7 Oregon recovered from a slow start to cruise to its eighth consecutive victory, 56-24 over Southern California on Saturday night.

Freshman Mykael Wright returned a kickoff 100 yards for a touchdown shortly after Brady Breeze returned an interception 32 yards for a score late in the second quarter for the Ducks (8-1, 6-0 Pac-12). Oregon erased an early 10-0 deficit by scoring a touchdown after each of four turnovers by USC freshman quarterback Kedon Slovis during a 19-minute stretch spanning halftime.

Herbert and receiver Jaylon Redd rushed for touchdowns in the first half for Oregon, which remained on track for the Pac-12 North title and a good shot at the College Football Playoff despite a rough start at the Coliseum. Johnson, the Ducks' senior Penn State transfer, had seven catches for 106 yards after making just six previous receptions all season.

Herbert threw his second interception of the season and didn't look sharp early, but the senior NFL prospect went 21 for 26. Oregon committed 12 penalties for 157 yards and had two defensive players ejected, yet remained perfect since its season opener after its defense thoroughly rattled Slovis.

Slovis threw for 264 yards and three touchdowns on a USC-record 57 pass attempts, but his three interceptions and a fumble erased the Trojans' solid start. Slovis and Air Raid offensive coordinator Graham Harrell surpassed Todd Marinovich's single-game record of 55 attempts for the Trojans, set in 1989.

Michael Pittman Jr. and two-sport freshman Drake London caught first-half touchdown passes for USC (5-4, 4-2), which fell out of first place in the Pac-12 South with its third loss in five games. Touted freshman Kyle Ford made his first career catch for a 20-yard touchdown with 3:11 to play.

After Slovis hit London for a TD on the Trojans' opening drive, Herbert threw an interception directly to USC's Isaiah Pola-Mao, ending Herbert's streak of 133 straight passes without a pick, the second-longest in the nation. Herbert had thrown just one interception in his previous 362 pass attempts in Pac-12 road games during his four-year career.

The Ducks finally got moving in the second quarter after Verone McKinley III intercepted a pass that ricocheted off London's hands. Pola-Mao was ejected for targeting during the ensuing drive, which ended with Herbert's 10-yard TD run, his first of the season.

Oregon defensive tackle Austin Faoliu was ejected for unsportsmanlike conduct during an ensuing long drive by USC, but Slovis fumbled on a play from the Ducks 3 while trying to avoid a sack.

Oregon responded with a 92-yard TD drive abetted by two major penalties on USC and capped by Redd's TD run. Breeze got his pick-6 moments later on a terrible throw by Slovis.

Slovis led a gritty TD drive ending in Pittman's TD catch 20 seconds before halftime, but Wright returned the ensuing kickoff straight through the heart of the Trojans' coverage unit. It was Oregon's first TD kickoff return since the 2017 season opener.

Oregon safety Nick Pickett was ejected for targeting in the second half.

Oregon: The Ducks' defense and special teams responded splendidly to the early test with one big play after another. USC's shakiness was a credit to the Ducks' steadiness, and they'll need it during their finish against the Arizona schools and Oregon State before a probable trip to the Pac-12 championship game.

USC: The Trojans didn't have the toughness or the perseverance to pull off an upset, and coach Clay Helton's five-year tenure could draw to a close this month if USC's new athletic director agrees with his demanding new fans. The Trojans are just one game off the Pac-12 South lead, but would need help from Utah's remaining three opponents.

Oregon: An off week, followed by a visit from Arizona on Nov. 16.