Ionescu has triple-double, Oregon advances to Sweet 16 with 91-68 win against Indiana

Sabrina Ionescu had 29 points, 12 assists and 10 rebounds for her 18th career triple double and second-seeded Oregon defeated No. 10 Indiana 91-68 on Sunday to advance to the Sweet 16 at the NCAA Tournament. 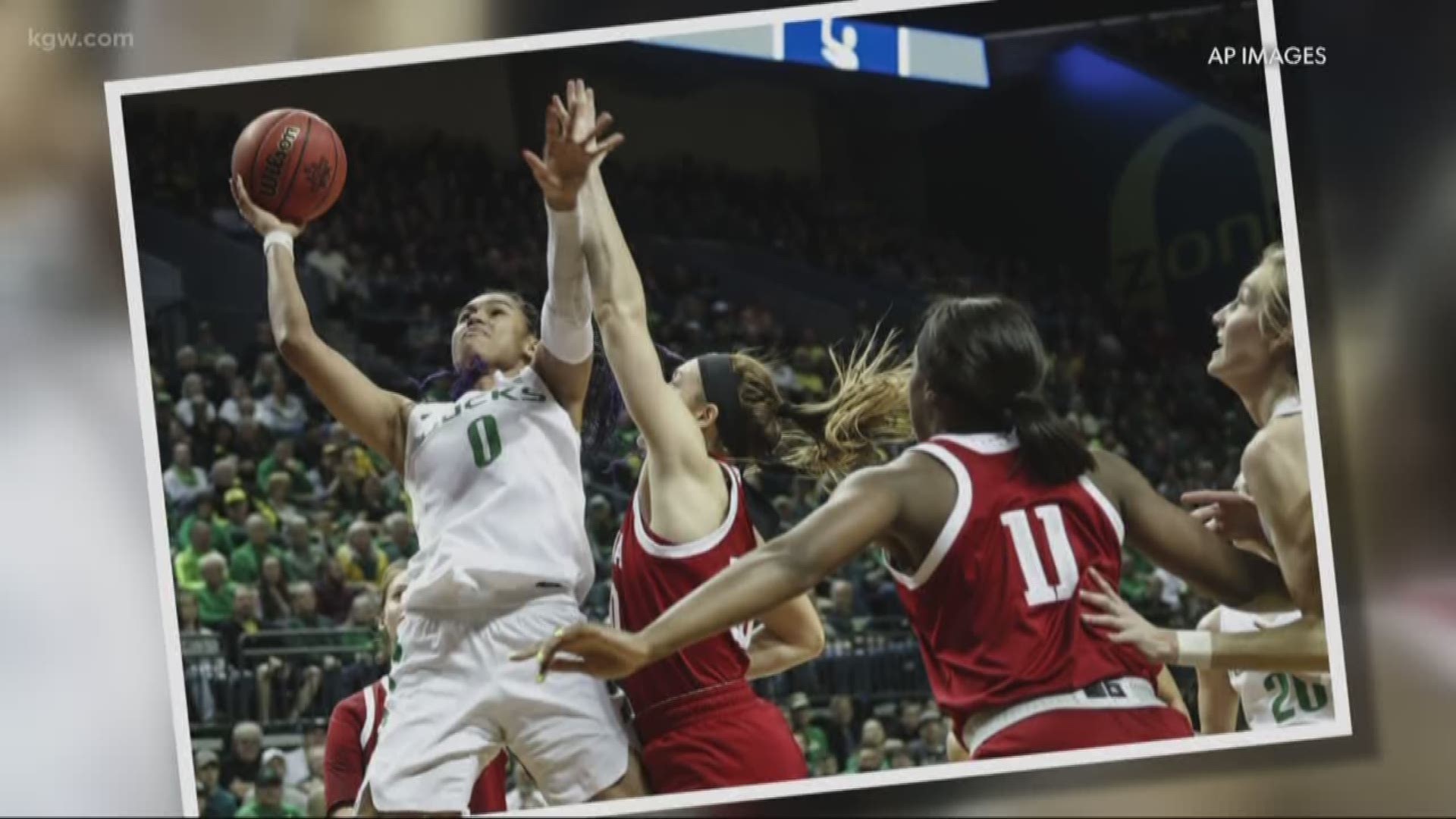 EUGENE, Ore. — Long after Sabrina Ionescu collected her 18th career triple double — in an NCAA Tournament game, no less — she stayed on the court at Matthew Knight Arena to sign autographs and pose for photos.

At one point a Ducks fan shouted her way: "Come back next year!"

The junior guard had 29 points, 12 assists and 10 rebounds and second-seeded Oregon defeated No. 10 Indiana 91-68 on Sunday to advance to the Sweet 16 at the NCAA Tournament.

Already the NCAA's career triple-double leader among both men and women, she's had eight this season alone.

She reached her latest on Sunday with just over 2 minutes left when she corralled a rebound on her own missed shot.

"Yeah, it was cool," she said later. "But I'm just honestly just really happy that we played really well. It's so fun when you're moving the ball. ...  And everyone scored tonight, so just being able to get that last game that we all have together here with this particular team on this home court was awesome," she said.

With speculation that she may turn pro at the end of this season, it may have been Ionescu's final career game at Matthew Knight Arena. But it certainly won't be her last game in Oregon: With the win the Ducks (31-4) advanced to face the winner of Monday's game between South Dakota State and Syracuse next weekend at Portland's Moda Center.

Satou Sabally added 19 points and eight rebounds for the Ducks, who are headed to the round of 16 for the third straight season. Oregon led by as many as 23 points.

"That's the special thing about Sabrina, she really does not care about the stats. She doesn't brag about it, she's not the kind of person who is hunting stats. This is what makes her unique" Sabally said.

Ali Patberg had 16 points and Jaelynn Penn added 15 for the Hoosiers, who were hurt in the third quarter when Bendu Yeaney was injured and left the game.

Indiana was making its first appearance in the NCAA Tournament since the 2015-16 season, and sixth trip in school history. The Hoosiers improved their overall record to 3-5 with a win over Texas in the opening round.

"As good as Oregon is, could we have had a chance? Maybe, if we'd shot it a little bit better, but tonight Oregon was the better team, and they beat us," Indiana coach Teri Morin said.

The winner of last year's WNIT Tournament, Indiana was helped in its bid for an NCAA berth this season by a victory over No. 10 Iowa last month.

Penn had had 24 points, including four 3-pointers, in Indiana's 69-65 victory over seventh-seeded Longhorns on Friday.

Oregon easily dispatched No. 15 seed Portland State 78-40 in Friday's other first-round game, shaking off a disappointing 64-57 loss to Stanford in the Pac-12 tournament championship game.

The Ducks have been to the NCAA Tournament for the past three seasons, including Elite Eight appearances in the last two.

Ionescu answered with her own 3 and was fouled for the four-point play to tie it at 28. She added another and pumped her fists as she ran back down the court.

She capped the half with a 3-pointer that made it 43-31 at the break, and finished with five 3-pointers overall.

The Pac-12 Player of the Year went into Friday's game averaging 19.4 points, 8.1 assists and 7.5 rebounds a game. It is her second triple-double in the NCAA Tournament, she also had one in the first round last year. She joins Stanford's Nicole Powell as the only players with multiple tournament triple-doubles.

"I knew I had three rebounds in the third quarter and I wasn't really happy with that, so I knew I had to get more. And I had people telling me, you need a rebound, you need a rebound and so I had looked up and saw that I needed a few more, but that's not necessarily what I was hunting, I was just happy that we were in the lead and we were playing well."

Indiana: Indiana has faced Oregon just once before, falling 77-56 back in 1984 at a tournament in Portland. ... The Hoosiers are 8-5 all-time against the Pac-12. ... Indiana has collected at least 20 wins for the fourth straight season. Yeaney is from Portland, Oregon, and went to St. Mary's Academy. She had a large contingent of fans at the game in Eugene, about a two-hour drive to the south.

Oregon: Oregon Governor Kate Brown was at the game. ... Oregon shot 59 percent from the field in the first half, and 51 percent for the game. Erin Boley finished with 14 points, including four 3-pointers.

Yeaney collapsed midway through the third quarter and it was immediately apparent that something was wrong with her left foot or ankle. She was in tears as she was led off the court, later returning to watch the end of the game in sweats and on crutches.

"She struggled throughout the season with some Achilles issues, but at this point I can't comment. We're gonna get her back to Bloomington and she'll see the doctor. But it was significant enough that she couldn't play, and that hurt us," Indian coach Teri Morin said.