Final Four preview: Oregon is newcomer but ‘not done yet’

UConn, Notre Dame and Baylor have been Final Four mainstay programs. But the Ducks aren't intimidated heading into their first Final Four. 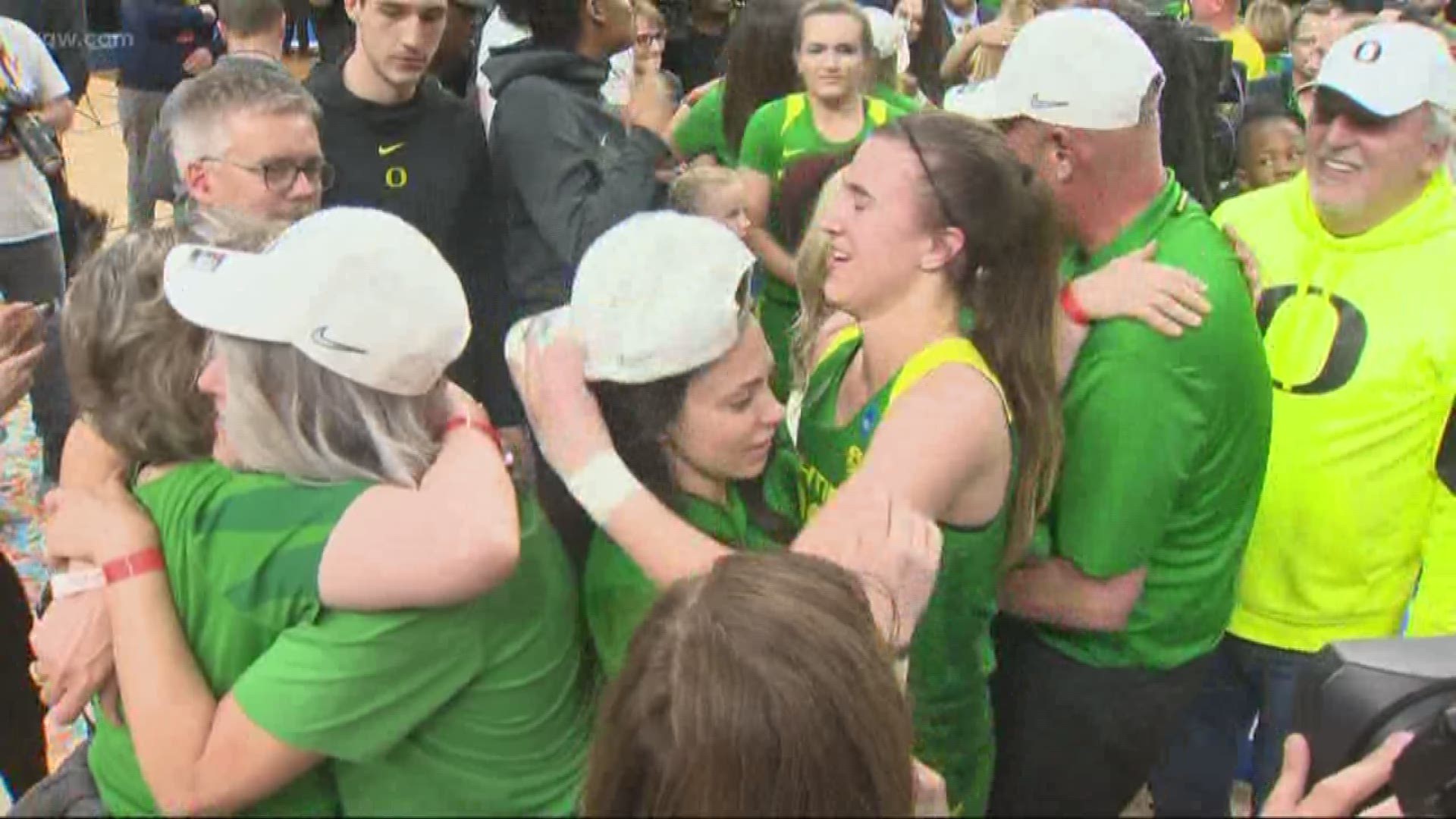 NEW YORK — Geno Auriemma and his UConn Huskies will face a familiar foe in Notre Dame on the game's grandest stage.

The two teams, who have had the best rivalry in the sport over the past decade, will square off on Friday night in the Final Four.

It's the second consecutive year that they will play in the national semifinals. The Irish won a thriller last year, topping UConn in overtime on a last-second shot by Arike Ogunbowale.

She hit a similar shot two nights later at the buzzer to help Notre Dame win its first national championship since 2001, capping off one of the greatest Final Fours in NCAA history.

"Well, last year's game was a great finish, so I wouldn't mind seeing that again. But they're a great team," Notre Dame coach Muffet McGraw said. "They played really well against Louisville in the final yesterday. They're a team that has so many weapons. Katie Lou (Saumelson) looks like she's back in good form. Napheesa (Collier) has had a fabulous year. (Crystal) Dangerfield is a great defender, and she can score, as well. They have a lot of weapons. And similar to us, they don't have a very deep bench, so I think there's a lot of similarities between the teams.

"Going back to the first game, we really lost our composure in that game, so hopefully we've learned a lot of lessons since then."

UConn and Notre Dame have played six times in the Final Four or national championship game since 2011. They have split the six meetings with the Irish going 3-1 in the semifinals. Baylor will play Oregon in the first game of the Final Four.

The Huskies continued their remarkable record run, making the Final Four for the 12th consecutive year. Auriemma was at a loss for how his team has been able to reach the national semifinals every year.

"I don't think it's supposed to happen," Auriemma said of the incredible run. "Not in today's world the way things change and teams keep getting better and better. It's not normal. It's something that's hard to describe because even if you're writing a book and making it up, people would say it doesn't happen in real life. It has happened in real life, I'm still boggled, my mind doesn't get how it can happen this many years in a row with a different cast of characters that change so often. No it's not normal, it's not normal."

This one was a little different as UConn was a No. 2 seed for the first time since 2006. There is less pressure on the Huskies who have lost in the semifinals the past two seasons. UConn was undefeated the past two years heading into the final weekend of the season and lost both times on last-second shots. This season UConn has lost twice — to Baylor and Louisville.

Notre Dame was the team that came into the season with the pressure, returning most of the national championship team and adding Brianna Turner, who missed last year with an injury. The Irish lost to the Huskies by a shocking 18 points in December. They also lost two games in the ACC regular season before hitting their stride. They were down seven at the half to Stanford in the Elite Eight before rallying for the win.

While UConn and Notre Dame have been Final Four mainstays the past decade, Baylor is making its first appearance since 2012 when the Lady Bears finished off a 40-0 season with the national championship.

The overall No. 1 seed has run through the NCAA Tournament so far, winning by an average of 36 points. After falling short in the NCAAs the past few years, coach Kim Mulkey was thrilled for her seniors such as Kalani Brown, who will get a chance to play in the national semifinals.

They'll face a Final Four newcomer in Oregon. The Ducks had made the Elite Eight the previous two years falling in the regional final each time. Sabrina Ionescu wouldn't let it happen a third straight season. The Ducks junior All-American guard had 31 points, eight assists and seven rebounds.

"All I gotta say is we're not done yet," she said after the 88-84 victory Sunday over top-seeded Mississippi State.

It's been a meteoric rise under coach Kelly Graves since he took over five years ago. The Ducks went from 10th place in the Pac-12 the year before Graves took over to winning the conference regular-season title this year and now reaching the Final Four for the first time.

"We started from scratch, so to speak," Graves said. "There were great kids in the program, really good players. We weren't quite the championship level yet. I give my staff a ton of credit. They worked their butts off. We had a plan. We stuck to it, recruited really well. ... I think our student-athletes are the real ambassadors.

"When young women come on campus, they see what it's like, we talk family. A lot of people profess, hey, their culture is about family. Well, they see it and they believe it because it's there."