Sabrina Ionescu had 31 points, eight assists and seven rebounds, and the second-seeded Ducks beat the No. 1 seed Mississippi State Bulldogs 88-84 on Saturday. 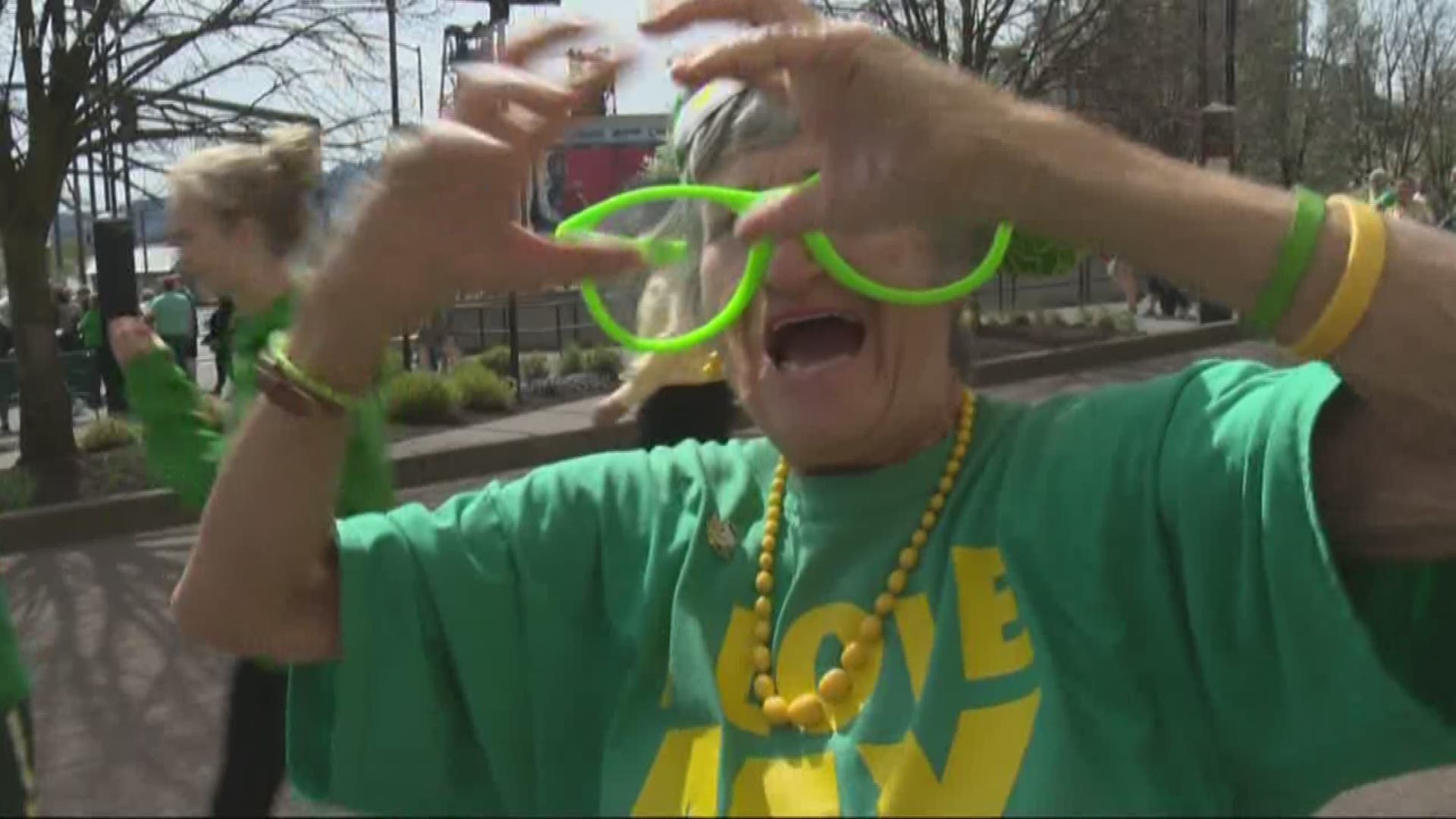 PORTLAND, Ore. — Off to Oregon's first appearance in the Final Four, guard Sabrina Ionescu set the theme for the second-seeded Ducks.

"All I gotta say is we're not done yet," Ionescu said after she had 31 points, eight assists and seven rebounds in Oregon's 88-84 victory Sunday over top-seeded Mississippi State.

Satou Sabally had 22 points and seven rebounds for the Ducks (33-4), who head to Tampa, Florida, to face top overall seed Baylor, who routed Iowa 85-53 in the Elite 8.

The Final Four game between Baylor and Oregon is set for Friday at 4 p.m. PT on ESPN2.

At the final buzzer, Ionescu jumped into teammate Ruthy Hebard's arms and coach Kelly Graves flashed an "O'' with his hands to the crowd. The Ducks had been eliminated in the Elite Eight the past two seasons.

As Ionescu cut down a piece of the net, fans at the Moda Center chanted "One more year!" at the junior guard, who has been dogged by rumors she may skip her final year to go pro.

Teiara McCowan had 19 points and 15 rebounds in her final game for the Bulldogs (33-3), who had played in the NCAA title game for the past two seasons. Two of Mississippi State's losses this season were to Oregon, and the first one was a true road game in Eugene.

It certainly had the feeling of an away game for Mississippi State, even though the Bulldogs wore their home whites. Attendance at the Moda Center was announced at 11,534, with the vast majority cheering on the Ducks — a tough draw for a top seed.

"For us, man, I just can't be prouder of my team today. You talk about competitive, tough. I just thought my team just fought tooth and nail today in a really hostile environment," Bulldogs coach Vic Schaefer said.

Ionescu's jumper put Oregon up 78-73 with just under three minutes left. After McCowan made a pair of free throws, Ionescu added a 3 that put the crowd on its feet and essentially put it away for the Ducks.

Bre'Amber Scott's layup with 54 seconds left pulled the Bulldogs within 81-77, but Maite Cazorla answered with a 3-pointer for the Ducks. Jazzmun Holmes' jumper cut the margin to five points with 26.4 seconds to go, but Mississippi State could not catch up.

Ionescu averaged 19.6 points, 8.3 assists and 7.5 rebounds going into Sunday's game. The Pac-12 Player of the Year has 18 career triple-doubles, an NCAA record among men and women, including eight this season.

"I'm never amazed at anything she does really, after three years," Graves said. "You just expect the incredible."

The Bulldogs went up 15-8 early, but Sabally hit a 3-pointer that closed the gap as Oregon relied on its perimeter game. Oregon finished with 13 3s.

Ionescu's 3-pointer tied it at 19, but the Bulldogs had free throws to make it 21-19 at the end of the first quarter. The Ducks hit five of eight 3-pointers in the opening period alone.

Oregon pulled in front 30-27 on Cazorla's 3-pointer in the second quarter. The Ducks led 40-38 at the break. Ionescu led all scorers with 15 points, including three 3-pointers.

Hebard was tasked with guarding McCowan, but she had two fouls and went to the bench midway through the second quarter. But she opened the second half with a layup, and Ionescu added another to give the Ducks a 44-38 lead. Andra Espinoza-Hunter made a 3-pointer to close the gap.

Oregon held the edge until Howard's layup put the Bulldogs in front 54-53.

Mississippi State got a scare late in the quarter when McCowan went down hard on a layup attempt and stayed on the floor for several moments. She went to the bench holding the right side of her chest.

"A loss is a loss, you know? It doesn't feel good," McCowan said. "But I'm proud of my team, my coaching staff we got this far. We had a great season. Nothing to hang our heads on. Yeah, it hurts, but we'll be OK."

Oregon: The Ducks lost to eventual champion Notre Dame in last year's Elite Eight. ... With her first basket of the game, Sabally went over 1,000 points at Oregon. ... Hebard finished with 14 points.

Mississippi State: The Bulldogs fell short in their bid to become the seventh team to reach the Final Four three straight years. ... The 6-foot-7 McCowan, the SEC Player of the Year, was averaging 18.3 points and 13.5 rebounds and should be an impact player in the WNBA. ... Holmes added 15 points and 13 assists for the Bulldogs, and didn't have a turnover. "The first thing that jumps off is 13 assists and no turnovers, in an Elite Eight game, I'm never getting off my soapbox about that kid," Schaefer said. "What an injustice to have an award and she's not one of the top five in the country, it's a joke."

Ionescu was asked afterward to go through the 3 she hit with just over a minute left.

"That was going in, regardless, there's no other way to say it," she said, drawing laughs. "I wanted to finish this game off the right way. We've come so far. We played so hard that entire game and I knew it was my time to hit a big-time shot."

Baylor (35-1) is headed to Tampa, Florida, for the school's fourth Final Four and its first in seven years. They beat Iowa 85-53 on Monday night in the Greensboro Regional final.

The Final Four game against the Ducks is set for Friday night.