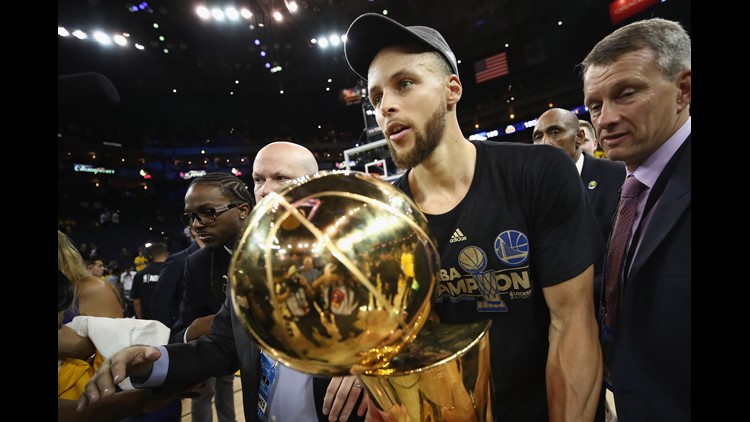 <p>OAKLAND, CA - JUNE 12: Stephen Curry #30 of the Golden State Warriors carries off the Larry O'Brien Championship Trophy after defeating the Cleveland Cavaliers 129-120 in Game 5 to win the 2017 NBA Finals.</p>

Steph Curry told reporters Wednesday that while the team will still decide as a group on what they plan to do, he hasn't changed his stance from what he would like that decision to be.

NBA Finals champions, the Golden State Warriors, said earlier this week in a statement that no decision had been made on if they would visit President Donald Trump at the White House — if they were even invited to the White House — as is tradition of championship-winning teams.

But Steph Curry told reporters Wednesday that while the team will still decide as a group on what they plan to do, he hasn't changed his stance from what he would like that decision to be.

"Somebody asked me about (going to the White House) a couple of months ago, like a hypothetical, if the championship were to happen would I do it and I think I answered 'I wouldn't go'. I still feel like that today," he said. "But, obviously as a team, we're going to have a conversation.

"This is a moment we all need to enjoy together and nothing should distract what we were able to accomplish together. The different kind of ceremonies and traditions that have happened around championship winning teams, we don't want that to taint what we've accomplished this year. So we'll handle that accordingly and responsibly and do the right thing for us individually and as a group."

Curry isn't the only player who feels this way. Andre Iguodala told USA TODAY Sports' Sam Amick, "Hell nah,” on if he wants to take part in it.

“We’re going to do what our leader (Curry) does,” Iguodala told Amick. “I think we handle (the White House situation) when it gets there. I mean, it may be different. There might be somebody different in (office). That’s a realistic thing to say though, right? So you don’t know what’s going to happen.”

“Frankly, I think it’s why Trump couldn’t be more ill-suited to be president, because he’s a blowhard," Kerr said in an interview. "You don’t see some of the qualities you talk about, the resilience, the ability to communicate, the compassion. None of that. But in the old days, a lot of great coaches who maybe didn’t have those, there was still a fiber there, whatever it was. To be a great leader, there have to be some qualities in there.

“Has anyone ever thought that Donald Trump was a great leader?”