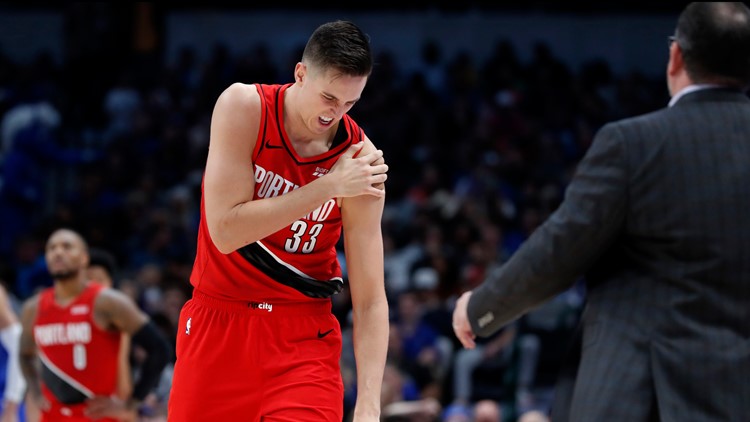 Photo by: AP
Portland Trail Blazers forward Zach Collins (33) holds his left shoulder as he walks to the bench for assistance after suffering an unknown injury in the second half of an NBA basketball game against the Dallas Mavericks in Dallas, Sunday, Oct. 27, 2019. (AP Photo/Tony Gutierrez)

Blazers' Zach Collins has MRI on shoulder, will miss at least next two games

PORTLAND, Ore. — Portland Trail Blazers forward Zach Collins will miss at least the next two games after he injured his left shoulder in Sunday's win against the Dallas Mavericks.

Blazers head coach Terry Stotts said Collins had an MRI on Monday. He said Portland's starting power forward will miss Monday's game against San Antonio and Wednesday's game against Oklahoma City, and that he'll be re-evaluated when the Blazers return to Portland.

Stotts didn't offer any information about what the MRI results revealed.

Collins dislocated his left shoulder in the third quarter Sunday against Dallas. After the game, Collins told reporters that trainers were able to pop his shoulder back in "cleanly," and that it feels better than expected. The Oregonian's Joe Freeman reported that Collins said he was optimistic about the MRI results.

Portland, which trailed by 19 points in the first half of Sunday's game, rallied to beat the Mavericks 121-119.