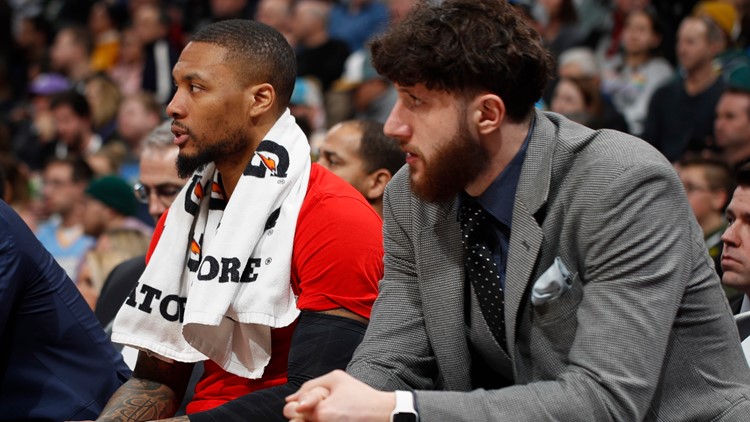 What's next for the Blazers after NBA's suspension of season due to coronavirus?

There are a lot of unanswered questions as the league decides what its next steps will be, but here’s a look at what this means for the Portland Trail Blazers.

In the latest episode of the 3-on-3 Blazers podcast, Orlando Sanchez and Nate Hanson share the shock they felt on Wednesday night with the announcement that the NBA season was suspended and look forward to what the future may hold for the team. You can read a full breakdown below.

When will the team play again?

NBA commissioner Adam Silver said the NBA will be on break for at least 30 days, and owners have said they want a reassessment at the end of that 30-day window. Dallas Mavericks owner Mark Cuban said he thinks the break could last 60 days. The NBA could probably start up sooner if they decide to play games without fans in attendance. There would be far less risk that way, but owners would take a big hit with the loss of gate revenue.

Could the NBA cancel the rest of the regular season and just start the playoffs?

That would be the worst-case scenario for people hoping the Blazers can still make the playoffs once this gets started up again. But if it takes too long to get going again (well past the 30-day window), the NBA could cancel the rest of the regular season and just begin with the playoffs. In that scenario, the Blazers would not qualify as they’re on the outside of the playoff picture right now.

Could the NBA cancel the season altogether?

The NBA’s preference is to finish the regular season and playoffs, but if it takes too long to safely start up games again, there is precedent for canceling a sports season. In 1994, Major League Baseball canceled its season because of a player strike. In 1919, the Stanley Cup Finals were canceled because of the Spanish Flu.

What does this mean for the offseason and start of the 2020-21 season?

The NBA can push back the NBA draft and free agency. If the NBA does resume the 2019-20 season and finishes late into the summer, it would likely push back the start of the 2020-21 season. That could lead the way to owners and players discussing a later start to the season going forward, something that has already been discussed by owners.

What’s next for the Blazers?

Players are required to stay in Portland through at least Monday. At that point, the team will reassess its next steps. All group practices and activities are canceled through at least Monday, though players can work with coaches in one-on-one settings in the practice facility, which remains open to players and staff in Tualatin.

Is there a silver lining for the Blazers?

Time is a blessing for injured starters Jusuf Nurkic and Zach Collins. Nurkic was expected to make his return to the court Sunday. The extra time off will only help. Zach Collins said he wanted to return by the end of this month. If the NBA season resumes after 30 days, it seems likely that both Nurkic and Collins will be available to play, giving Portland a better chance of making a run in the team’s remaining 16 games.

Likewise, if the 2020-21 season begins later than expected, that gives injured small forward Rodney Hood a better chance of being healed and ready to go by the start of next season.

RELATED: 'A sad couple of months without sports': Fans react to coronavirus cancellations