Shocker at Oracle, or do weary Blazers come up empty in Game 1? My video game has an answer

PORTLAND, Ore. — At some point, the magic has to run out, right?

Eleven days ago, I fired up my copy of NBA 2K19 and simulated Game 3 of the Trail Blazers' second-round series against the Nuggets. 2K simulated a Blazers win.

Using the same copy of NBA 2K19 — a Christmas gift from my loving children this year — I simmed Games 4 and 5. 2K simulated Nuggets wins in both of those games.

Three correct simulations in a row. A pattern was emerging.

Four days ago, sitting in my screening room upstairs at my house in Sherwood (where every simulation has taken place), I simmed Game 6. Season on the line for the Blazers. Back home at the Moda Center. Win or go home.

And the real-life Blazers obliged, beating the Nuggets 119-108 to force a Game 7, scoring the exact number of points my copy of 2K simmed before the game. Four correct simulations in a row.

I was certain that was it, though. Surely 2K would send the Blazers home for the summer in a Game 7 simulation. The Nuggets were the higher seed. They were at home (where they lost only seven games in the regular season), and had blasted the Blazers by 26 points in their most recent game in Denver.

But I simulated anyway.

I wrote up an article about the second simulation for KGW.com before the Blazers and Nuggets tipped off Game 7 in real life. But I'll admit, I thought this was the end of my 2K simulation fun. The Nuggets were going to win, right? Home teams win Game 7 almost 80% of the time in the NBA playoffs.

Five straight correct simulations by my copy of 2K, the last one the most unlikely of them all, and now the Blazers are heading to the Western Conference finals to face the best team in the NBA, the defending champion Golden State Warriors.

It seems likely 2K, even my "enchanted" copy, will sim a bunch of Warriors wins and eliminate the Blazers. They are the Warriors, after all. But I have to keep it going until the spell is broken.

RELATED: Print out this Blazers sign to hang in your home or business!

So, on Monday night, I sat down with my copy of 2K in my upstairs screening room at my house in Sherwood, and I simulated Game 1 of the Western Conference finals.

Remember my rules for simulation. No fudging player ratings. No do-overs. One take. No cheating.

I set the rotations for both teams, important because of injuries that will keep key players out of Game 1. I put Kevin Durant (he'll miss Game 1 with a calf strain) on the injured list for the Warriors, and then used Game 6 of their second-round series against the Rockets, a game they won without Durant, as the blueprint to set their rotation and the minutes for each player.

I used the average minutes of each Blazers player in the playoffs to set the rotation for Portland, moved Rodney Hood to the injured list (he's questionable for Game 1 with a bruised knee bone), and split up his minutes between Zach Collins, Al-Farouq Aminu, Maurice Harkless and Evan Turner.

Then I hit "Simulate Game."

So, either a ton of Blazers fans are going to be very happy on Tuesday night at the conclusion of Game 1, and I'll need to put my copy of 2K in a safety deposit box to keep it safe from Warriors fans who will surely try to steal it and destroy it ... or the magic will run out and my copy of 2K will just go back to being a normal, boring, not-enchanted copy of 2K.

We'll all know, one way or the other, by Tuesday night.

NBA 2K19 simulation of Blazers at Warriors, Game 1 of the Western Conference finals 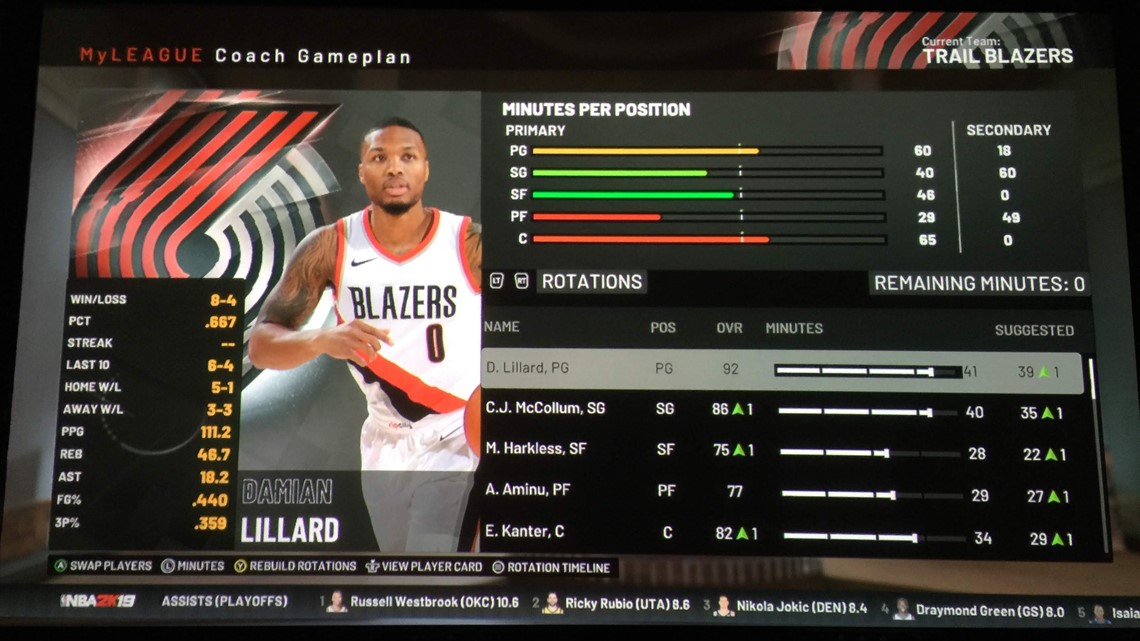 In the meantime, let's take a look at what 2K simulated, what looks realistic and what looks like it may be stretching the limits of reality.

Guard play rules: It's not a surprise, considering the makeup of these two teams, to see the starting guards playing so well in this simulation. CJ McCollum has been on fire in the playoffs and in this simulated game, he doesn't let up, scoring 33 points on 14 of 28 shooting. Damian Lillard adds 28 points and 11 assists, though he continues to struggle with his shot, shooting 8 of 21 from the field and 5 of 14 from the 3-point-line. For the Warriors, Stephen Curry leads the way with 31 points on 11 of 25 shooting, and Klay Thompson pours in 28 on 12 of 23 marksmanship. Not unrealistic at all.

Blazers big men: Enes Kanter and Al-Farouq Aminu both notch double-doubles for the Blazers. Kanter finishes with 16 points and 14 rebounds, and Aminu totals 14 points and 13 rebounds. Kanter's numbers are pretty well on par with his postseason stats. Aminu's production in this simulated game isn't a stretch. He's played well against the Warriors, including in the playoffs. In the 2015-16 postseason, he averaged 17.2 points and 8.4 rebounds in a second-round series against the Warriors.

Draymond wreaks havoc: Draymond Green fills up the stat sheet with 18 points, seven rebounds, five blocks, four assists and three steals. Seems about right. Green has been playing really well in the playoffs, and he always seems to get up for Portland.

Another Blazers rally: After coming back from a 17-point deficit in Game 7 against the Nuggets, in this simulated Game 1, the Blazers trail by as much as 21 points and are down 14 entering the fourth quarter and storm all the way back to tie the game and then win it in overtime. Realistic? I don't know. Portland rallied against Denver, and in Game 5 against the Thunder, they came back from a 13-point fourth-quarter deficit to win. So yeah, it could happen.

Rebounding saves the day: The team stats are pretty even across the board. Nothing really sticks out too much, except one. The Blazers grab 20 offensive rebounds, and it looks like those extra possessions help. Portland gets up eight more field goal attempts than Golden State, but is able to match the Warriors' made field goals despite shooting a lower percentage, thanks to those extra offensive possessions.

The real Game 1 starts Tuesday night at 6 p.m. on ESPN. I mean, we already know what's going to happen, but go ahead and tune in anyway. Just for fun.