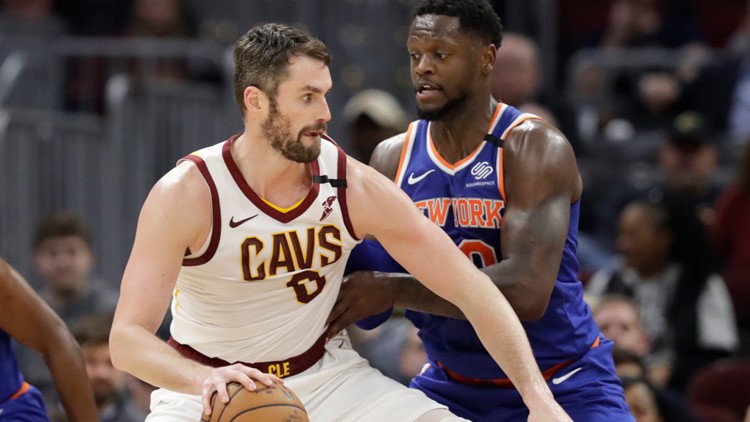 PORTLAND, Ore. — The Portland Trail Blazers tried to trade for Cleveland Cavaliers power forward Kevin Love, according to a report by The Athletic's Jason Lloyd.

"The only [trade offer] I know definitely equated to just a salary dump. Portland offered [Hassan] Whiteside and [Kent] Bazemore, which essentially would've matched Kevin's salary. But both of those are expiring contracts and the Cavs would've received no real assets in return," Lloyd wrote in a Q&A on The Athletic's website.

Lloyd is wrong about the matching salaries. Kevin Love makes $28.9 million this season. Whiteside makes $27.1 million and Bazemore makes $19.3 million. If the Blazers offered both Whiteside and Bazemore, there would have been other pieces involved to make the trade work.

The Cavaliers' asking price for Love was a first-round pick, according to Lloyd, who said Cleveland plans to try to trade Love again this summer during the offseason.

"Most teams were telling the Cavs they'd need to include assets just to get them to take Kevin's contract," Lloyd wrote. "The Cavs were asking for a first-round pick."

The Blazers ended up trading Bazemore and Anthony Tolliver to the Sacramento Kings for Trevor Ariza, Caleb Swanigan and Wenyen Gabriel.

Late last year, The Ringer's Kevin O'Conner wrote that Love preferred to be traded to the Blazers.

RELATED: Report: Kevin Love wants to be traded to the Portland Trail Blazers

RELATED: Is Kevin Love the right fit for the Portland Trail Blazers?