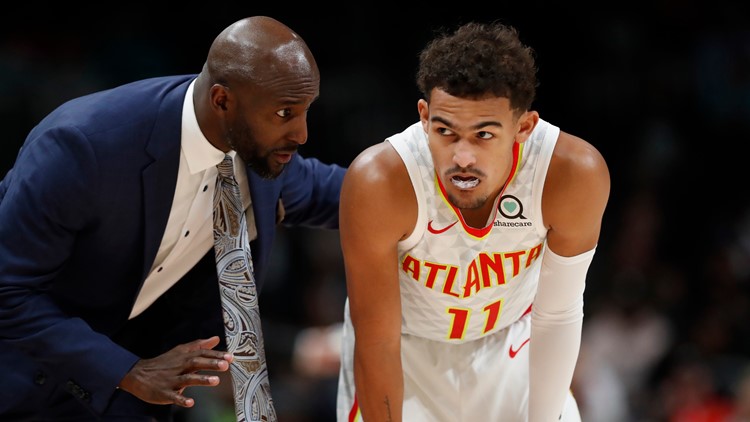 Photo by: John Bazemore
Atlanta Hawks head coach Lloyd Pierce, left, talks to Trae Young (11) in the first half of an NBA basketball game against the Philadelphia 76ers, Monday, Oct. 28, 2019, in Atlanta.

Blazers vs. Hawks, game preview, how to watch

Hawks point guard Trae Young leads the team in scoring (25 per game), assists (8.1 per game) and steals (1.6 per game). He started the season averaging 34 points while shooting 52% from the 3-point line in the first three games before he suffered a sprained ankle on Oct. 29. In the three games since, he's averaged 22.7 points and is shooting 28.6% from 3. ... The Hawks are without starting power forward John Collins, who was suspended for 25 games on Nov. 5 for violating the terms of the NBA's anti-drug program. Collins tested positive for growth hormone releasing peptide-2, a stimulant that can lead to increased muscle mass. Collins was averaging 17 points, 8.8 rebounds and 2.0 blocks for Atlanta this season. ... The Hawks are 1-2 since Collins' suspension. Jabari Parker, who has started the past three games at power forward, is averaging 20.7 points and 7.0 rebounds per game. ... The Hawks rank 25th in the NBA in offense (102.4 points per 100 possessions) and 14th in defense (106.1 points per 100 possessions).

After scoring a career-high and franchise record 60 points in Friday's loss against the Brooklyn Nets, Damian Lillard is averaging 33.3 points per game this season, which ranks second in the NBA behind Houston's James Harden. Lillard is shooting 49.5% from the field and 39.8% from the 3-point line. ... CJ McCollum is averaging 19.4 points per game, but his shooting slump continues. He missed 15 of 19 shots, including both of his 3-point attempts in the loss to the Nets, and is now shooting 38.0% from the field and 32.6% from the 3-point line. ... The Blazers continue to deal with injury woes. Rodney Hood, Hassan Whiteside and Skal Labissiere are all questionable to play against the Hawks. The Blazers called up rookies Jaylen Hoard and Moses Brown from the G-League for Sunday's game. ... The Blazers rank 11th in the NBA in offense (108.4 points per 100 possessions) and 21st in defense (109.4 points per 100 possessions).

RELATED: The Blazers are off to a bad start. Is it time to panic?

LISTEN: Time to panic? Plus your questions!