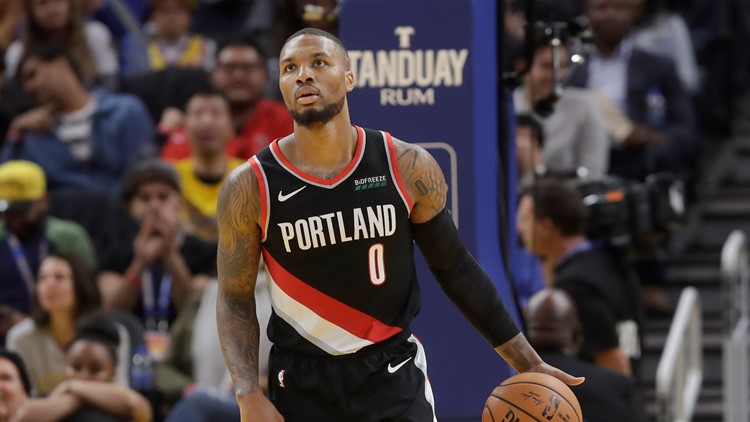 The Blazers are off to a bad start. Is it time to panic?

PORTLAND, Ore. — The banged-up Portland Trail Blazers aren't exactly living up to the championship-contending pace they set for themselves before the season began.

Injured big men Jusuf Nurkic and Zach Collins won't suit up for a game until Valentine's Day or later, and Pau Gasol still hasn't played as he recovers from foot surgery last May. And after Monday's surprising loss to a bad Warriors team playing without Seth Curry, Draymond Green and D'Angelo Russell, the Blazers have lost four of seven to start the season.

Things look bleak, but the season is only a few weeks old. The schedule remains road-heavy for the next couple weeks, but eases up after that. Reinforcements, either through a healthy Gasol or a front-office signing or trade, are hopefully on their way.

It's not time to panic.

On this week's episode of the 3-on-3 Blazers podcast, we discuss the biggest issues facing the Blazers right now, talk about reasons for optimism in the midst of a slow start, and make predictions for the next five games.

Do you have any questions or comments for the 3-on-3 Blazers team? Email them to 3on3blazers@gmail.com!

LISTEN: Time to panic? Plus your questions!

1. What is the biggest problem the Blazers are dealing with right now and can it be fixed?

Jared: The Blazers' defense has been the team's biggest problem, and one of the main reasons it has been so bad is rebounding. Portland ranks 23rd in both opponent offensive rebound percentage and defensive rebound percentage. The Blazers actually aren't bad at defending shots; they rank 12th in opponent effective field goal percentage. But because the Blazers don't rebound the ball well (and foul too much, and don't force turnovers), they give opponents too many extra chances on offense. Can they fix it? I don't know. Portland may not have the personnel to make it work right now. The Blazers currently have three below-average rebounders in their starting lineup. The biggest problem is at power forward, where the current starter, Anthony Tolliver, ranks eighth on the team in rebounding. Unfortunately, the Blazers don't really have a good option at that position. Mario Hezonja, who ranks second on the team in rebounding, is probably who would get the nod if Terry Stotts removes Tolliver from the starting lineup, but Skal Labissiere is also an intriguing choice. He's played well this season and his per-36 averages — 18.3 points, 10.7 rebounds, 2.7 blocks — are enticing.

With Labissiere, though, there's a catch.

He's not an option to play minutes at power forward right now, according to one report. NBC Sports Northwest's Mike Richman, who is also the host of the Locked on Blazers podcast, reported that Labissiere told him he doesn't know the team's plays at power forward. That’s why he's played exclusively at center this season. I'm not sure how quickly Labissiere can learn those plays, but expanding his role beyond playing backup center minutes could really help the Blazers.

Orlando: The biggest problem is this team is banged up. Did you see the Blazers injury list a few nights ago? I didn't have enough characters to send it out in one tweet. You've got six new players on the roster trying to fit in and you throw injuries into the mix; can't say I’m surprised they're 3-4 to open the season with the hand they've been dealt. I'm concerned about the amount of work Damian Lillard is getting through seven games. To quote Nate, "not all minutes are created equally," and Lillard is having to carry the load every single night. With load management being a hot topic and seeing players like Kawhi Leonard already resting, I can't help but wonder if all these early intense games will take a toll. I hope not. Someone's gotta step up and it starts with CJ McCollum.

Nate: I don’t think the Blazers can fill the Zach Collins void long-term without a roster move. Anthony Tolliver does not have the same level of versatility as Collins. We've seen it already in the four games that Collins has missed. Zach Collins posted a +13.1 net rating in his three games as a starter. Granted, that wasn't a sustainable level of play, but it showed Collins was a threat offensively and a disruptor defensively. So far this season, Tolliver has not been the same kind of threat. His net rating in the four games since he joined the starting lineup is -3. The starting lineup's net rating with Collins in it was +25.7. Again, that wasn’t sustainable, but it showed the high ceiling the starting lineup had with Collins. Plug Tolliver into the starting lineup, and that group's net rating is -0.6. I expect head coach Terry Stotts will do significant tinkering with rotations while Collins is out, but I'm not confident the Blazers have the answer in house.

2. What reasons do the Blazers have for optimism, even in the midst of a 3-4 start to the season?

Orlando: It's easy to find optimism even after getting embarrassed by the Santa Cruz Warriors. They're seven games in. Period. Blazers fans should be used to this. In 2015-16 season, they started the year 4-9 and had a seven-game losing streak during that span. The following season they were 13-20 to start the year and lost 10 out of 11. Those were dark days and they turned it around and got to the playoffs. It's too early to panic. Let's see what type of adjustments Coach Stotts makes and see how these guys respond to their first taste of adversity. There are lots of experienced players on this roster capable of weathering the storm. There's a lot of basketball to still be played.

Nate: They have Damian Lillard and head coach Terry Stotts. With those two, the Blazers have found a way to make the playoffs in each of the past six seasons and win a playoff series in three of those. There are times every season when it seems like that streak will come to an end. But time after time, the Blazers have responded by winning games. The big difference this year, as opposed to past seasons, was the expectation that Portland would be a championship contender. Those need to be tempered right now, although not completely buried. As we saw last year, there’s a lot that can happen at the trade deadline and this Blazers team could look very different come April than it does in November. What the Blazers need to do between now and then is win enough games to remain in playoff contention, and then see what happens when they’re at full strength in the postseason. If Lillard and Stotts are together, the Blazers always have a puncher’s chance.

Jared: Damian Lillard is playing like an MVP. He's averaging 31.1 points, 7.3 assists, 5.0 rebounds and 1.3 steals per game. He's shooting 49.3% from the field and 40.3% from the 3-point line. If you're looking for optimism, start there. But another big reason to be optimistic is the production of Anfernee Simons. He's been impressive to start the season and looks more comfortable and confident with every game. Simons is averaging 9.6 points in just 16.9 minutes per game and shooting the ball well (53.1% from the field and 40.9% from the 3-point line). During the Warriors game (sorry to bring it up), I watched Golden State trap Simons to get the ball out of his hands, the same kind of traps we've seen defenses employ against Lillard. That was surprising. I put this stat out there on Twitter earlier this week, but it's worth repeating. In the 49 minutes Lillard and Simons have shared the court this season, the Blazers have outscored teams by 25.3 points per 100 possessions. It's Lillard's best net rating with any teammate. Simons isn't just the future, he's good right now.

3. It's a busy stretch for the Blazers right now, who play FIVE games between now and our next podcast. They play at the LA Clippers (5-3) tonight, are home against the Brooklyn Nets (3-4) on Friday and Atlanta Hawks (3-4) on Sunday, at the Sacramento Kings (2-6) on Tuesday and home against the Toronto Raptors (5-2) on Wednesday. Which games do the Blazers win and which do they lose?

Nate: This may be the most difficult set of game predictions we’ve done in the three years of the podcast. The Blazers are a complete wild card right now. I’ve gone the predictable route the first two weeks of the regular season and I’m going to do it again. Portland goes 3-2 and calms some of the doomsday talk that exists in the fanbase right now. Portland drops their games against the Clippers and Raptors, but has a three-game winning streak in between, beating Brooklyn, Atlanta and Sacramento (for the second time already).

Jared: This is a tough stretch of games for the Blazers, with two road-to-home back-to-backs. That's not ideal. At least the two flights back home, from Los Angeles and Sacramento, aren't long trips. I think the Blazers will play well tonight, but with this game being in Los Angeles, I'll pick the Clippers to win. I think Portland bounces back with wins against the Nets and Hawks at home and the Kings on the road. The Brooklyn game could be close but Portland gets the advantage because they're at home. I was surprised to see how bad Atlanta's offense has been (they rank 28th in the NBA), and they just lost starting power forward John Collins to suspension. The Kings are playing a little better lately, but they still rank 24th in offense and 25th in defense. I think the Blazers get them. Kawhi Leonard left town, but the Raptors are still good. They rank ninth in offense and 13th in defense. Even so, I'm going to go out on a limb and give the Blazers the nod at home. The Blazers go 4-1.

Orlando: Wouldn't it be the most Blazer thing to see them beat the Clippers? That's worth a laugh for sure. I'm not going that far, though. I got burned last week with my picks, so I'll say loss at Clippers. The next four games are all winnable, but I’ll play it a little safer. I'm concerned with the Nets game being the second of a back-to-back and Brooklyn having a few days of rest. The Hawks will be fun to watch. They should be able to win at Sacramento. They’ll win those three games and lose to the Raptors. They go 3-2 this week.