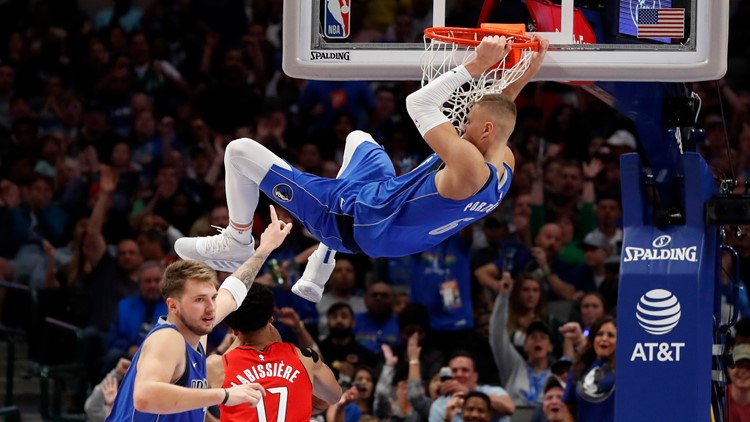 Photo by: Tony Gutierrez
Dallas Mavericks center Kristaps Porzingis (6) hangs on the basket after dunking the ball as Luka Doncic (77) and Portland Trail Blazers' Skal Labissiere (17) look on in the second half of an NBA basketball game in Dallas, Sunday, Oct. 27, 2019.

NBA power rankings: The Blazers' defense is a work in progress

PORTLAND, Ore. — After three games, the Portland Trail Blazers' offense looks great. The defense? It's not so hot.

Three games isn't a large enough sample size from which to draw conclusions, but it's the sample size that's available to us, so let's dive in and check the data.

Early on, two notable defensive issues for Portland are 3-point defense and rebounding.

Portland's defensive rebounding percentage is 72.6, which ranks 21st in the NBA. Last season, the Blazers ranked eighth in that metric.

The Blazers are giving up the fifth most 3-point attempts (39.7) this season. Portland ranked third best in that statistic last season. Opponents are shooting 38.7% from 3 against the Blazers this season, which ranks 23rd in the league.

Here's a look at how the Blazers fared in the latest batch of power rankings:

The Athletic: Blazers rank 8th (up 1)

What they wrote: The Portland Trail Blazers have a tough schedule to start the season. They started out at home against Denver, and then immediately went on a four-game road trip with Sacramento, Dallas, San Antonio and Oklahoma City. Then they get a home game against Philadelphia before going to San Francisco (not hard!) and Los Angeles for a game against the Clippers. Then they get to come home for games against Brooklyn and Atlanta. Then they go to Sacramento before a home game against Toronto. But that’s not all! It gets tougher!

After that initial 12 games of maybe three easy ones, the Blazers go back on the road for six straight games in San Antonio, Houston, New Orleans, Milwaukee and then two easier ones in Cleveland and Chicago.

Thirteen of their first 18 games are on the road. That’s just a brutal stretch of 18 games with travel for the first month or so of the NBA season. The Blazers coming out of that with a winning record wouldn’t be a surprise because this team is good and the Damian Lillard-CJ McCollum backcourt is that impressive. But it would still be a huge step in the right direction for the Blazers trying to get back to being a top 3 seed. — Zach Harper

What they wrote: Over three games, the Blazers have been outscored by 57 points from 3-point range; They're the only team in the bottom five in both 3-pointers made and (most) 3-pointers allowed per game, and the Nuggets shot 18-for-32 from beyond the arc in their win in Portland on Wednesday. (After winning the first 33 games they led after the third quarter last season, the Blazers lost the first game they led after the third quarter this season.) But having allowed a league-low 23.3 points per game in the restricted area, their points in the paint differential (plus-18.0 per game) is the best in the league. They've picked up two road wins within the Western Conference (with two more games to go on their four-game trip), Hassan Whiteside leads the league in rebounding percentage, and Terry Stotts is the best call-challenging coach in NBA history. — John Schuhmann

What they wrote: After going the distance in last season's playoffs, "Game 8" between the Nuggets and Blazers didn't go Portland's way, as Denver made plays and hit shots down the stretch. A convincing bounce-back over the shaky Kings and a clutch time win over the Mavs, however, is the kind of thing the Blazers do. It's why they keep making the playoffs, it's why they're always around 50 wins. Though if Zach Collins misses extended time because of a dislocated left shoulder, it'll be an early test for this Blazers' front line. — Royce Young

What they wrote: Questions surrounding Portland’s roster limit expectations in a loaded Western Conference. But the Blazers are a likely playoff team as long as Damian Lillard is in town. Another top-five MVP finish is in play. — Michael Shapiro

What they wrote: A host of new players but the same formula remains effective for the Blazers: Turn things over to the electric backcourt of Damian Lillard and CJ McCollum. The floor of this team remains high with those two healthy and Terry Stotts calling the shots, and they've started accordingly. — Colin Ward-Henninger

RELATED: 'Be who you are': The advice Bill Schonely gave Travis Demers, the new radio voice of the Blazers