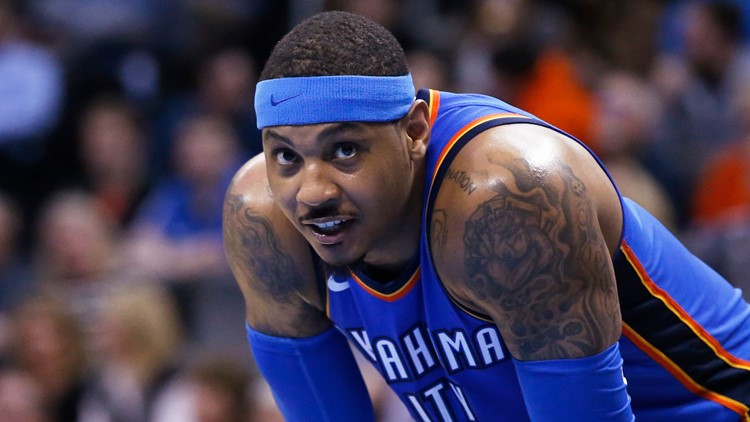 PORTLAND, Ore. — The Portland Trail Blazers' signing of Carmelo Anthony has generated a lot of interest across the NBA, with players, fans and pundits all questioning whether the 10-time All-Star can help turn around Portland's season.

Portland (5-8) is three games below .500 and still has five games left on this six-game road trip. Anthony is expected to join the team Monday night in New Orleans and be available to play against the Pelicans.

What's still unknown is what role the Blazers envision for Anthony. Will he start at power forward or come off the bench? How many minutes will he play? Will head coach Terry Stotts give Anthony opportunities to score in isolation or will his main role be as a spot-up shooter playing off Damian Lillard and CJ McCollum?

RELATED: How Carmelo Anthony could learn from Dwight Howard

Anthony struggled as a spot-up shooter before the Houston Rockets released him after 10 games last season. But in the two seasons before that, that wasn't the case.

With the Thunder in the 2017-18 season, nearly 24% of his Anthony's plays on offense were as a spot-up shooter and he generated 1.02 points per possession, which ranked in the top half of NBA players, according to NBA.com. The season before that, Anthony spotted up on about 15% of his offensive plays and he contributed 1.23 points per possession, which put him in the top 10%. Those two seasons provide evidence Anthony could fill that role effectively for the Blazers.

The Blazers have played more isolation basketball than normal this season, ranking second in isolation plays per game, which plays into Anthony's style. The past two seasons, he's been above average in that category, ranking in the 58th percentile scoring in isolation, and three seasons ago, he ranked in the 78th percentile.

One other thing to consider. As former Blazers employee Kris Koivisto pointed out on Twitter, it was 20 years ago that another past-his-prime NBA superstar came to Portland.

Scottie Pippen was 34 years old when he joined the Blazers in 1999. Anthony is 35. When Pippen came to Portland, he hadn't been named to an All-Star team in three seasons; the same is true for Anthony. Before Pippen joined the Blazers, he'd played 39,068 minutes and 1,065 games in his career, which is pretty close to Anthony's career totals of 40,902 minutes and 1,136 games.

Pippen went on to play four impactful seasons with the Blazers. Only time will tell what kind of an impact Anthony will have in Portland.

What they wrote: I really wasn’t sure if Carmelo Anthony was going to get his shot again in the NBA. Most executives and scouts one talked to questioned Melo's willingness to accept a much lesser role. The funny thing about that is Anthony was saying all of the right things with taking a lesser role, but he couldn't prove it in any way unless given the chance to prove it. With the season sputtering and the Portland Trail Blazers needing to find an answer at forward, they decided to roll the dice on Melo with the low stakes of a non-guaranteed deal.

I would imagine that Melo will be asked to do something similar to what it was supposed to be in Houston. He came off the bench for the Rockets. He took more spot-up 3-pointers than trying to really do anything else. He took 5.1 catch-and-shoot 3-pointers per game in Houston and made just 31.1% of them. Nowhere near where he needed his accuracy to be, but he was also given just 10 games before Daryl Morey shelved him. On 2.4 open (4-6 feet of room) 3-pointers per game, Melo knocked down a ridiculous 45.8%. On 2.4 wide-open (6+ feet) 3-point attempts per game, he hit just 29.2%. That averages out to 37.5% on those shots. If he shows that kind of stability as a shooter, it will open things up for Damian Lillard, CJ McCollum and even Anfernee Simons. The Blazers don’t need All-Star Melo. They don't need Hoodie Melo or Olympic Melo. They just need him to come through on his promise to fill the role they ask. After not playing basketball for a year, it will take him time to find consistency. Hopefully, Terry Stotts and Neil Olshey give him more than the 10 games the Rockets did. — Zach Harper

What they wrote: Can Carmelo Anthony swing Portland's wayward season? Probably not, but it's a worthwhile gamble nonetheless. The Blazers desperately lack frontcourt scoring. They rely far too heavily on Mario Hezonja. Al-Farouq Aminu and Maurice Harkless have not been sufficiently replaced, and Damian Lillard's dominance hasn't resulted in a lot of wins. Why not take a shot on the 10-time All-Star? — Michael Shapiro

What they wrote: Reportedly signing Carmelo Anthony doesn't quite qualify as a "desperate measure," but these are pretty desperate times for the Blazers, who have seen the league's third biggest drop in point differential per 100 possessions (5.1) from last season. In comparison to the league average, the drop-off has been only slight bigger on offense, but that's obviously the end of the floor where Anthony has made his bones. He isn't going to help them inside — the Blazers are the only team that ranks in the bottom five in both field goal percentage in the restricted area (57.8%, 28th) and the percentage of their shots that have come from the restricted area (28%, 27th) — but there's also a need for floor spacing, with Mario Hezonja, Skal Labissiere and Nassir Little having combined to shoot just 17-for-61 (28%) from outside the paint. Little, perhaps inspired by the pending arrival of Anthony, gave the Blazers some good minutes in his second career start on Saturday. Four of their five wins have come on the road and they've got five more games on their current trip, with Anthony potentially making his debut in New Orleans on Tuesday. — John Schuhmann

What they wrote: The Blazers are basically doing the inverse of the 2018-19 Rockets: They have gotten off to a terrible start (in part due to depth and injury issues) and are now bringing in Carmelo Anthony. Any hope that Melo is the solution in Portland might be a delusion of grandeur, but it is possible both sides can help each other. And it could be something of a soft opening for the Melo-era Blazers, too: Assuming he debuts Tuesday in New Orleans, five of his first six opponents are sub-.500 teams. — Royce Young

What they wrote: Was it a coincidence that the Blazers won their first game after agreeing to sign Carmelo Anthony? Either way it was good to get in the "W" column for a change, and they'll hope to keep the momentum going with games against the Rockets, Pelicans, Bucks and Cavs coming up. If Melo fits, he'll add a much-needed scoring boost so maybe Damian Lillard doesn't have to play 39 minutes a game. If he doesn't, it could send the team into even more dire straits. Get your popcorn ready! — Colin Ward-Henninger