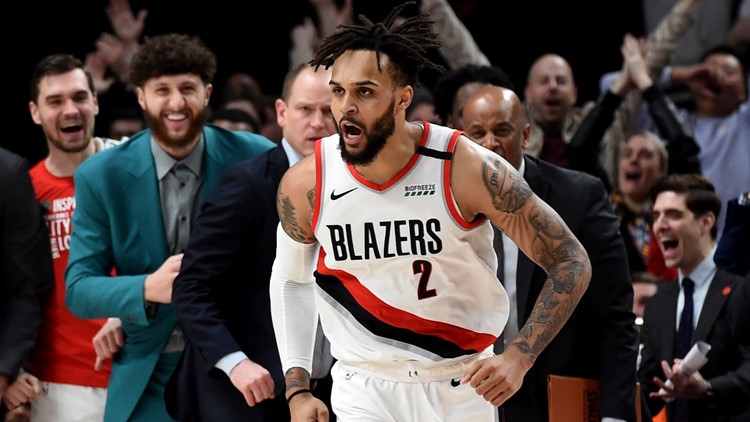 Photo by: Steve Dykes, Associated Press
Portland Trail Blazers guard Gary Trent Jr. reacts after hitting a shot in front of the team's bench late during the second half of an NBA basketball game against the San Antonio Spurs in Portland, Ore., Thursday , Feb. 6, 2020. The Blazers won 125-117.

PORTLAND, Ore. — Damian Lillard has been carrying the Portland Trail Blazers in their quest for the final playoff spot in the Western Conference, but in the past few weeks, he's received a welcome boost from a veteran forward and a second-year guard.

Veteran wing Trevor Ariza, who came to the Blazers in a late January trade, has given the Blazers size, defense and smarts at the small forward position. He's averaging 10.2 points, 4.6 rebounds, 1.6 steals and shooting 50.7% from the field and 40% from 3 in almost 32 minutes per game.

In the nine games since Ariza arrived in Portland, the Blazers are 6-3, with wins against playoff-caliber teams like the Pacers, Rockets, Lakers, Jazz and Heat. In those nine games, the Blazers are the NBA's highest-scoring offense, putting up more than 120 points per 100 possessions.

Sophomore guard Gary Trent Jr. has been lights out the past 11 games, averaging 14.6 points and shooting 52.7% from the field and 47.9% from the 3-point line. During this stretch, Trent Jr.'s emergence has helped the Blazers shore up two weaknesses: the team's bench and its closing rotation.

The bench unit that has been starting the second and fourth quarters most often in the past 11 games — CJ McCollum, Anfernee Simons, Gary Trent Jr., Carmelo Anthony and Caleb Swanigan — is outscoring opponents by 5.1 points per 100 possessions.

The two closing lineups Stotts has turned to most in the past couple weeks have both included Trent Jr. The lineup consisting of Lillard, McCollum, Trent Jr., Ariza and Hassan Whiteside is outscoring teams by 16.5 points per 100 possessions in the fourth quarter, while the same lineup with Anthony instead of McCollum has outscored teams by 55.6 points per 100 possessions.

The Blazers have two more games before the All-Star break, Tuesday at the New Orleans Pelicans and Wednesday at the Memphis Grizzlies. Portland (25-29) trails Memphis (27-26) by 2.5 games for the final playoff seed in the Western Conference.

Here's a look at how the Blazers fared in this week's power rankings:

What they wrote: Tough week for Damian Lillard, who averaged just 30.5 points in his three games. But it actually was a frustrating time for Lillard, who is still probably fuming over the missed goaltending call in Friday's game at Utah. The Blazers have won seven of their past 10 contests, but that one loss against the Jazz sticks out. Bouncing back with an impressive win over the Heat on Sunday at least showed some fortitude and focus, by not allowing one bad loss to turn into two. As Lillard said in his postgame gripe in Salt Lake City, every single game matters for Portland from here on out. — Royce Young

Sports Illustrated: Blazers rank No. 15 (down 1)

What they wrote: Damian Lillard was certainly right to be frustrated with the no-call on Rudy Gobert’s goaltend in the final seconds on Feb. 7. The Blazers are in the thick of a playoff race, and Lillard is playing perhaps the best basketball of his career. To lose a game due to arcane replay procedures is infuriating. Let’s hope the league alters its review protocol in 2020-21. — Michael Shapiro

What they wrote: Damian Lillard has averaged over 30 points and 8.3 assists on 41 percent 3-point shooting over his last four games, and it seems like he had a bad week. Opponents consistently threw double-teams at Lillard just beyond half court, and the Blazers went 2-2 against the Nuggets, Spurs, Jazz and Heat. Gary Trent Jr. is starting to come into his own on a team in desperate need of wings, averaging 16.8 points on 15-for-27 3-point shooting over the past week. — Colin Ward-Henninger

What they wrote: The Blazers' loss in Utah on Friday, in which the officials failed to call goaltending on Damian Lillard's drive to tie in the final seconds, may loom large in the race for the final playoff spot in the Western Conference. But Portland still controls its own destiny, three games in the loss column behind the eighth-place Grizzlies with all three head-to-head meetings still to come. The first of those is Wednesday in Memphis and the Grizz will have a rest advantage, with the Blazers playing (another important game) in New Orleans the night before. The other two meetings (March 12 and April 5) are in Portland, where the Blazers have won five straight after a quality win over the Heat on Sunday.

Lillard has cooled off a bit and Anfernee Simons (concussion) is on the shelf, but Gary Trent Jr. has emerged as another shooter of the bench. He has shot 42% from 3-point range (including 28-for-52 over the last 2 1/2 weeks) and the Blazers have scored more than 119 points per 100 possessions in his 392 minutes on the floor with Lillard. — John Schuhmann

What they wrote: I can’t really remember the last time I saw a team this livid over a blown call. Plenty of teams and players complain about botched calls, but the goaltend by Gobert that wasn’t called was one of the worst I can remember. What’s the point of having replay review when you can’t even replay that? Some kind of common sense override has to be able to come from the replay review center. The league can have its own discretion to use in these situations to make sure the right things are done. Even though it wouldn’t have guaranteed a Trail Blazers victory, it was important to give Damian Lillard that bucket and have the Jazz have to earn that win even more on the next/last possession or in overtime. Just a brutal way to lose and Lillard and company were rightfully furious with the incompetence of the refs at that moment.

With all that said, didn’t the Phoenix Suns get screwed on two calls in a one-point loss to the Blazers back in December? At two points in the game, we had an incorrect offensive basket interference call against Aron Baynes on what should have been a legal tip-in. Then Carmelo Anthony got away with basket interference when he cleared a shot off the rim. That’s a four-point swing in a game the Blazers won by just one point. The point of bringing this up is that the Blazers absolutely got screwed out of two points against Utah. It sucks. It may have cost them the game, even though they gave up 117 points that night. But they’ve also benefitted from this too. Be hot about the missed call, but the idea of feeling like it’s unfair overall seems a little biased to me. However, I do hope this turns Dame loose on another frustration-fueled tirade throughout the league. Those are always fun. — Zach Harper