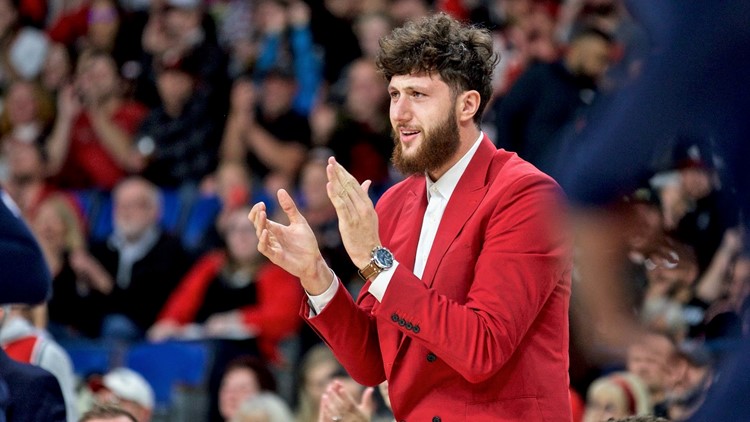 Photo by: AP
Portland Trail Blazers center Jusuf Nurkic cheers from the bench during the first half of the team's preseason NBA basketball game against the Denver Nuggets in Portland, Ore., Tuesday, Oct. 8, 2019. (AP Photo/Craig Mitchelldyer)

PORTLAND, Ore. — It was a big day at the Portland Trail Blazers' practice facility in Tualatin on Wednesday.

Jusuf Nurkic participated fully in practice, taking part in 4-on-4 and 5-on-5 drills with the team for the first time since last season's gruesome leg injury. Blazers head coach Terry Stotts said it was a natural step in Nurkic's progression.

Jason Quick of The Athletic reported that Stotts said there's still no definite date for when Nurkic will play in his first game. A source close to the situation told USA Today's Erik Garcia Gunderson that Nurkic is not expected to return until after the All-Star break. The Blazers' first game after the break is Feb. 21 at the Moda Center against Zion Williamson and the New Orleans Pelicans.

Blazers guard Damian Lillard said it was good to see Nurkic out on the court.

"It just sparks that optimism, especially in this situation," he said. "Especially today, I really felt like that. Nurk practiced full speed, contact, up and down. So seeing him out there, like being himself and not looking like he was struggling."

Fellow injured big man Zach Collins (left shoulder) was also on the court Wednesday, participating in in solo workouts, using both arms in dribbling drills and shooting jumpers from different spots on the court.

Blazers guard CJ McCollum, who has missed the past two games with an ankle injury, also took part in a workout with coaches.

The Blazers also welcomed three new players to the team Wednesday. Trevor Ariza, Caleb Swanigan and Wenyen Gabriel were acquired in this week's trade that sent Kent Bazemore and Anthony Tolliver to Sacramento, and all three met with the media after practice.

Ariza said Stotts told him he'll start at small forward for the Blazers. He said it was an adjustment coming off the bench in Sacramento.

"Of course you want to start, and [Stotts] did tell me I was coming to start. Most of my career in the NBA, I've been a starter, so it's kind of what I'm used to. It was an adjustment [coming off the bench in Sacramento]. When I got an opportunity to play extended minutes, I felt like I found a rhythm a little bit and everything was cool," he said.

Ariza averaged 6.0 points in 24.7 minutes per game this season with the Kings, shooting 39% from the field and 35% from the 3-point line. It was his lowest scoring average since 2013 and his lowest amount of playing time since 2009.

Ariza said his role with the Blazers is to play defense and shoot 3-pointers.

"Play defense, shoots 3's, do what I can to help this team win. I guess that's my new role," he said. "I'm happy any time I'm on the court, whether I'm shooting the ball, playing defense, anything I can do to help the team win, that's what I try to do to the best of my abilities. I'm not one to complain about shots, not one to complain about touches or any of that. I just play."

Overall, Lillard said the combination of Nurkic's return to practice, Collins going through drills, and the arrival of Ariza sparks some optimism for the team.

"Fresh energy, the excitement about guys being able to come in and help, and bring something different to the table. Sometimes during the season, you're trying and trying and it's not working, things aren't changing. So when something new happens ... it just kind of sparks that optimism," Lillard said. "Especially in this situation today, I really felt like that. Nurk practiced full speed, ... seeing Zach out here, seeing how well Trev looked in practice, it just felt good. It was almost like a pick-me-up. I felt good about it."

LISTEN: Are the Blazers really going to 'stand pat' at the trade deadline?

RELATED: What they're saying: More Blazers trades may be coming after Bazemore deal