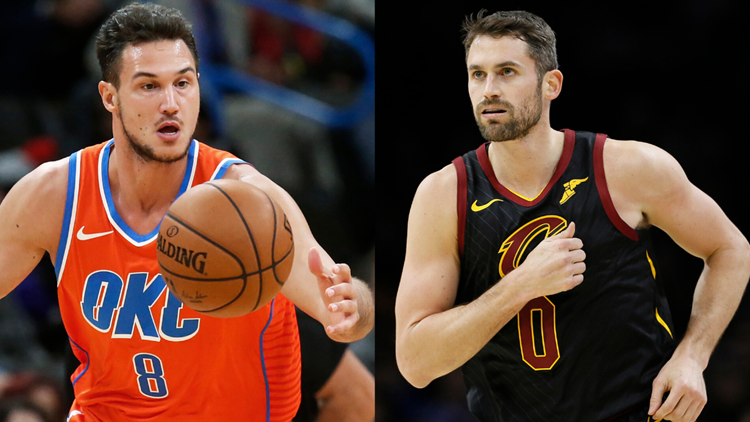 PORTLAND, Ore. — The Rodney Hood injury is unfair on so many levels.

First, it's a devastating turn of events for Hood. At age 27, just as he's set to entire the prime of his career, Hood was finally surrounded by teammates, coaches and a city that loved him. He had rediscovered his love of basketball in Portland and was having the best statistical season of his career. To suffer a season-ending Achilles tendon tear, one of the most challenging injuries for NBA players to come back from, is too cruel a twist for Hood.

It was also a devastating turn of events for the Blazers. Hood is the third Blazers starter in the past nine months to suffer a major injury, joining Jusuf Nurkic and Zach Collins. The only other team in the NBA that has endured so many major injuries to critical players is the Golden State Warriors, who lost Stephen Curry and Klay Thompson.

Considering their injury woes, it's no surprise that the Blazers and Warriors, who combined for 110 wins last season and faced off in the Western Conference finals, have a combined record of 14-34. Injuries of this magnitude sink even the best teams.

So, where do the Blazers go from here? How does the team replace Hood's production in the starting lineup? His ability as an offensive creator and elite shooter (he was shooting 50.6% from the field and 49.3% from the 3-point line) made life easier for Damian Lillard, CJ McCollum and Carmelo Anthony, and helped the Blazers starting lineup click.

There is no player currently on the Blazers roster that can recreate Hood's offensive creation and shot-making.

It appears that most of Hood's minutes will be absorbed by veteran Kent Bazemore, who has moved into the starting lineup at small forward, and 19-year-old rookie Nassir Little. In the Blazers' 108-96 loss to the Cavaliers on Sunday, Bazemore started and played 36 minutes and Little played 12 minutes off the bench.

Bazemore has his strengths. This season, it's been primarily his help defense that has stood out. But Bazemore has struggled to make shots this season. He's shooting 34.4% from the field and though he's hitting 35.6% of this 3-point attempts, including 40.9% on catch-and-shoot 3s, he's not a shot creator like Hood. Moving from Hood to Bazemore in the starting lineup is a step down for the Blazers.

Though Little has shown more than expected in his rookie season, especially in bringing athletic energy to the game, he's not a scorer or a shooter.

Trade season really begins Dec. 15, when players signed during the offseason are eligible to be dealt. The general consensus among NBA pundits and media and Blazers fans is that the team must make a move to replace Hood this season. There's little of value on the free-agent market, so a trade is the most likely scenario if the Blazer want an upgrade at talent on the wing.

"Dealing for a scorer in the frontcourt is now increasingly paramount," wrote Sports Illustrated's Michael Shapiro in this week's NBA power rankings. "Danilo Gallinari remains the most logical option."

The trade pieces the Blazers have to offer are expiring contracts in Hassan Whiteside ($27.1 million) and Bazemore ($19.3 million), young talent like Anfernee Simons, Nassir Little, Skal Labissiere and Gary Trent Jr., and future draft picks (the Blazers have all of their first-round picks going forward).

Here's a look at players the Blazers could pursue in trade to shore up their depleted roster:

What they wrote: Rodney Hood suffered a season-ending Achilles tendon tear, another brutal injury for the already extremely short-handed Blazers to try to overcome. After winning three straight and celebrating a Player of the Week award for Carmelo Anthony, Portland has lost three of four, all by double digits. And Melo's triumphant comeback might have plateaued a bit to coincide with the Blazers' slide. His past four games: 13.3 points on 32% shooting (33% from 3). He played 10 games with the Rockets, averaging 13.4 points on 40.5% shooting (32.8% from 3), and Houston was 4-6. He's played 10 with the Blazers, averaging 15.9 on 40.8% shooting (35.9% from 3), and the Blazers are 4-6. — Royce Young

Positive takeaway: Pretty awful news out of Portland with the Rodney Hood injury. A lot of this stuff ends up being 20/20 hindsight when we get an Achilles’ tendon rupturing, but there were conversations between Hood and the team that his Achilles’ tendon was still sore or experiencing discomfort. The team allowed him to play anyway, and Hood is usually going to go out there if he can go. Now he’s going to miss the next year or so as he comes back from arguably the toughest injury in sports, outside of maybe a hip injury. Hood was such an integral part of this attack for the Portland Trail Blazers.

Hood's 3-point accuracy was some of the best in the league. He knocked down 49.3% this season and was hitting 50.0% on corner 3-pointers. Considering his previous high was 38.1% for the season, Hood was ideal in spreading the floor so Damian Lillard and CJ McCollum, and even Carmelo Anthony could operate. The Blazers already had a dearth of quality wings outside of their stars, and now they'll have to rely even more on guys like Mario Hezonja and rookie Nassir Little. Best of luck to Hood in his recovery and hopefully we see him around this time next season. — Zach Harper

Sports Illustrated: Blazers rank No. 18 (down 2)

What they wrote: The Blazers will have a tough time replacing Rodney Hood, who tore his Achilles on Friday after shooting 49.3% from three in 21 games. Portland was already thin on its front line before losing the 6-foot-8 forward. Dealing for a scorer in the frontcourt is now increasingly paramount. Danilo Gallinari remains the most logical option. — Michael Shapiro

What they wrote: The Carmelo Anthony renaissance couldn't carry the Blazers through a rough week, as they dropped three of four. Anthony came back down to earth after earning Western Conference Player of the Week honors, averaging just 13.3 points on 32% shooting for the week. Rodney Hood's torn Achilles further depletes an already thin frontcourt. — Colin Ward-Henninger

What they wrote: The Blazers are down another starter, losing Rodney Hood (the league leader in catch-and-shoot 3-point percentage) to a torn Achilles on Friday. After that feel-good, Player-of-the-Week Melo, three-game winning streak, they've dropped three of their last four, allowing 119 points per 100 possessions over the four games. They had no answer defensively for Paul George (25 points in 29 minutes on Tuesday) or Anthony Davis (39 in 32 minutes on Friday), and in their most important game of the week, they shot just 36% at home against the Thunder. Though Hassan Whiteside had a huge game (22 points, 16 rebounds, seven assists and three blocks) against Sacramento on Wednesday, the answer to a lot of their issues is Jusuf Nurkic. But they may be in too deep of a hole by the time the big man returns. — John Schuhmann