The Blazers' new center had 16 points, 19 rebounds and two blocks against Denver, and made life difficult for Nikola Jokic, one of the best centers in the NBA. 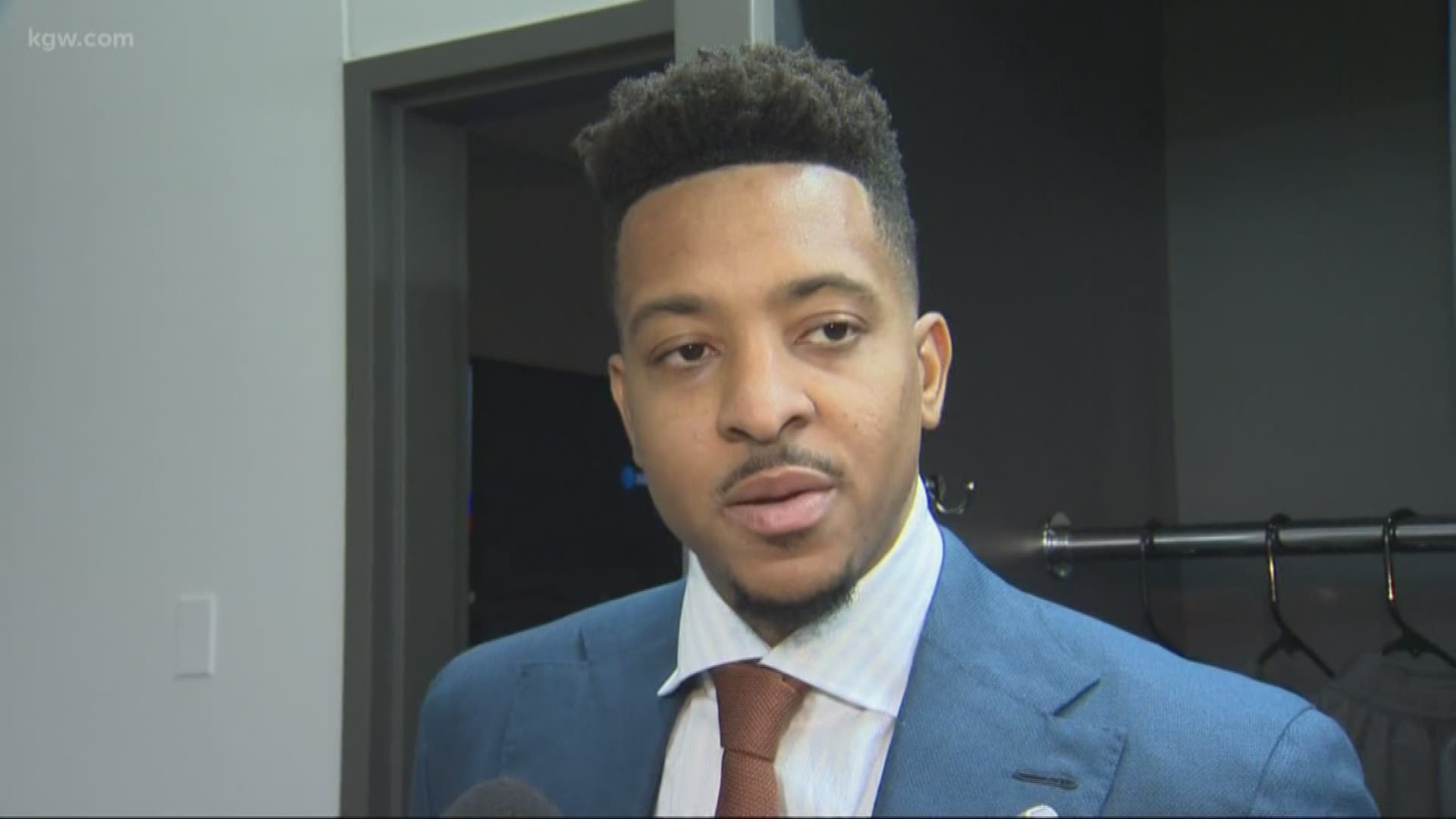 PORTLAND, Ore. — The Portland Trail Blazers opened their 50th anniversary season with a 108-100 loss at home on Wednesday night against the Denver Nuggets.

The loss snapped a streak of 18 consecutive wins for the Blazers in home openers. There were a lot of positives to take away from Portland's performance, as well as some areas of concern.

The Blazers now head out on the road for a four-game trip that begins Friday in Sacramento. In fact, 13 of Portland's next 17 games are away from home, including road games against seven playoff teams from last season: the Spurs (twice), Thunder, Warriors, Clippers, Rockets and Bucks.

RELATED: 'We've got to defend the 3 better': Blazers react to season-opening loss (video)

On this week's episode of the 3-on-3 Blazers podcast, we discuss our takeaways from the season opener, both positive and negative. We make predictions for the Blazers' next three games, and play another rousing game of Rip It!

1. What were your positive impressions from the Blazers season opener?

Jared: It starts with Hassan Whiteside for me. It wasn't a perfect debut for the Blazers new center, but it was pretty close. A double-double with 19 rebounds, 16 points and two blocks was probably more than anyone expected or even hoped for. He made 6 of 7 shots from the field and sank all four of his free throws. He made life difficult for Nuggets star center Nikola Jokic until the fourth quarter, when Jokic took over. It's like Nate (who happens to be in Denver right now) texted me during the game, "Whiteside...wowzers debut." Whiteside admitted after the game he's not in game shape yet after missing so much of training camp with an ankle injury. He was gassed in the second half and it showed. But if Portland can get this kind of production and effort from Whiteside, the Blazers are going to be really good. Overall, I think the starting lineup was really good and fun to watch, even with a bad shooting night from CJ McCollum. Against a very good Denver team, the starting unit of Damian Lillard, McCollum, Rodney Hood, Zach Collins and Hassan Whiteside scored 111.8 points and gave up 77.1 per 100 possessions, according to NBA Advanced Stats. That's a 34.6 net rating, which is very good.

Orlando: There were lots of positives to take away. The obvious answer is Hassan Whiteside. If you had any doubts about what he can do, he quickly put that to rest. He was a bully in the paint and did a good job guarding Nikola Jokic for most of the game. The man had a double-double before halftime. Damian Lillard said that was the type of presence they expected when he signed with the team. If he continues to be that guy, the Blazers are going to win a lot of games because of him. It was a solid start for Zach Collins. His stat line won’t impress you, but he impacted the game and avoided foul trouble. If the Blazers can get 30-plus minutes out of him as a starter, that’s a good sign. Another positive was Skal Labissiere in his first true meaningful minutes with the team, he scored eight points and hauled in six rebounds in 10 minutes. He arguably had the best night of any Blazers bench player. With Nurkic and Gasol out, Portland is going to need him and he showed he can hold his own against one of the best teams in the West.

2. What were your negative impressions from the Blazers season opener?

Orlando: The 3-point shot is the great equalizer. The Nuggets made lots of them and the Blazers missed lots of them. That was the game in a nutshell. It's concerning to see Portland defend the three. Denver got a lot of good looks. My biggest negative impression from one game was in closing time. It was anybody's game until the final four minutes, when Denver took over. Lillard said "we had too many lapses" when the game was on the line. They missed shots and missed defensive assignments, and they weren't sharp on either end of the floor in crunch time. It's hard to overcome 18 3-pointers, but they were in position to win it at home and didn't give themselves a chance over the final few minutes.

Jared: Two things stood out: the Blazers' bench performance and their 3-point defense. The Blazers' five reserves — in order of minutes played: Kent Bazemore, Mario Hezonja, Anthony Tolliver, Anfernee Simons and Skal Labissiere — combined to score 19 points and shot 6 for 22 from the field (27.2%). Yikes. That five-man unit played a disastrous 3 minutes together in the first half and had a -66.7 net rating. It's no wonder Terry Stotts staggered Lillard and McCollum in the second half to make sure one of them was on the court with the reserves at all times. Bazemore, despite missing six of his seven shot attempts, was good. He had five steals and made a positive impact on defense. Labissiere had eight points and six rebounds and played well in his 11 minutes. But overall, the bench was bad. Also bad? The Blazers' 3-point defense. Denver shot 56.3% from the 3-point line, making 18 of their 32 attempts. If it seemed like the Nuggets were open from 3 all game long, that's because they were. According to NBA Advanced Stats, of the Nuggets' 32 attempts from 3, all but one were either open (no defender within 4-6 feet) or wide open (no defender within 6 feet). That's some bad defense.

3. Prediction time! The Blazers' next three games are on the road, at Sacramento on Friday, at Dallas on Sunday, and at San Antonio on Monday. Which games do the Blazers win and which do they lose?

Jared: The Kings stunk in their season opener, losing by 29 points to the Suns. They were sloppy (29 turnovers), shot the ball poorly, and played little defense against a Phoenix team expected to be among the worst in the West. I don't think the Kings get better against the Blazers. The Mavericks beat the Wizards in their season opener and the duo of Luka Doncic and Kristaps Porzingis played well, combining for 57 points and 13 rebounds. The Mavericks' talent level beyond those two is a question mark, though, and the Blazers are a better team overall. Give the Blazers the win. The back-to-back matchup in San Antonio is tough. The Spurs were 32-9 at home last season. Give San Antonio the win. It's a 2-1 week for the Blazers.

Orlando: I’ve got the Blazers going 2-1 to start this road trip. They’ll beat the Kings and Dallas in a really close game. I think the Spurs will get them in the second game of a back-to-back.

Nate: As mentioned above, Nate's on vacation, so he texted in his picks for the next three games. He has the Blazers beating the Kings and Mavericks and losing to the Spurs. "I struggled with the Mavs game," he wrote. "But I think the Blazers have more depth than them. Anfernee against the Kings. Watch out. 👀"