The Blazers welcomed the former Miami Heat center at a press conference Thursday. He said the Blazers are "on the verge of doing something very special." 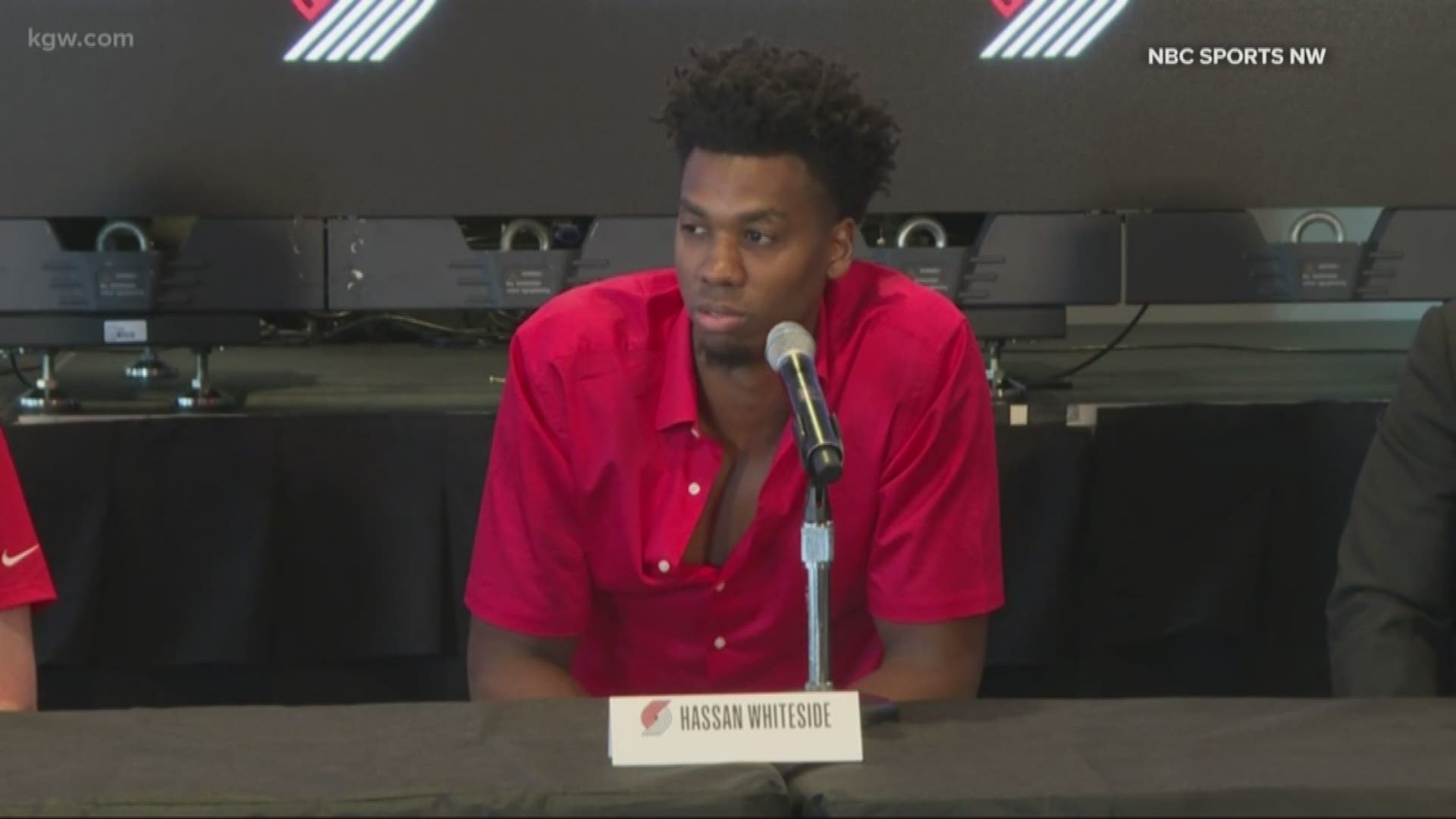 The team introduced the 7-foot, 265-pound center during a press conference Thursday afternoon in Las Vegas, where the Blazers Summer League team is currently playing.

The Blazers acquired Whiteside as part of a four-team trade that sent forward Meyers Leonard to the Miami Heat and forward Maurice Harkless to the Los Angeles Clippers.

Whiteside said he thinks Portland is a "perfect situation" for him.

“You ever been on a beach chilling and drinking a nice water, looking out at the sunset? That’s how I feel," Whiteside said.

Whiteside thinks he's a great fit on the court alongside the prolific scoring backcourt of Damian Lillard and CJ McCollum.

“I love passing. I’m looking for the opportunity," he said. "Those guys are big time shooters."

Head coach Terry Stotts said Whiteside can be a defensive anchor and is one of the best rim protectors in the league.

"We can improve defensively in other areas but having a guy like Hassan back there gives everybody else confidence to maybe be a little bit more aggressive... We’ve had success when we’ve had that type of player back there," Stotts said.

Despite his production, Whiteside saw a minutes reduction his last two seasons in Miami, which one case, led to Whiteside going on a profanity-laced tirade. Last season, Whiteside lost his starting spot to Bam Adebayo. His 23.3 minutes per game last season was the lowest of his five seasons in Miami. Whiteside expressed displeasure with his reduced role in comments to the media or in social media posts.

However, Whiteside doesn't feel his relationship with the Heat organization was as bad it has been portrayed. He said he can still call or talk with anyone in the organization, from executives to former coaches and teammates.

“I don’t really think it was a problem. If it was that big of a problem, I wouldn’t have been there that long,” said Whiteside.

Blazers general manager Neil Olshey then interjected: "We would have been able to trade for him a while ago."

Olshey said filling the starting center position until Jusuf Nurkic, who is expected to miss at least half the season due to a leg injury suffered in March, was "critical."

Olshey also said the Blazers have had interest in Whiteside since he was a free agent in 2016. Whiteside said at that time he started building relationships with Lillard and McCollum. Still, he ultimately decided to stay with the Heat, signing a four-year contract.

“We stayed on it. We continued to monitor his progress. We knew he was a great fit for the team," Olshey said.

Off the court, Whiteside said he's been welcomed with open arms by the Rip City fan base.

“People are so nice in Portland. I’ve heard so many ‘Welcome to Portlands.’ They really embraced me. It feels like close-knit town that really loves the Blazers," he said.

It appears Whiteside has embraced Portland as well. He posted an exuberant video to his Instagram page immediately following the trade.

Earlier this week, Whiteside was walking around downtown Portland with a friend, handing out Voodoo Doughnuts to people while yelling, "Go Portland! Go Blazers! Rip City!"

Whiteside said his mindset for this season is the same as every other Blazers player: Improve on last year's Western Conference Finals appearance.

“This is a fresh start and realistically I really think this team is on the verge of doing something very special," he said.