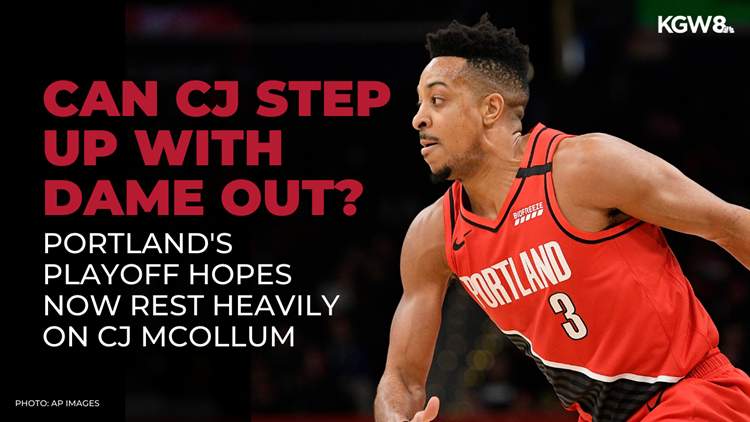 Photo by: AP Images / Jared Cowley, KGW
Can CJ McCollum step up with Damian Lillard out?

PORTLAND, Ore. — The Portland Trail Blazers have had a nice, long break during the NBA's All-Star festivities and now they have 26 games left in the regular season to achieve their goal of making the playoffs.

To get there, they'll have to make up some ground with the eighth-place Grizzlies holding a four-game lead in the standings over the Blazers. And they'll have to start that pursuit without their best player.

RELATED: When do the Blazers play next?

The next few games will be a tough stretch for the Blazers without Lillard. The next three games are at home, but they're against the Pelicans, who are 3-0 against Portland this season; the Celtics, one of the best teams in the East; and the Pistons, which gives Portland a chance at a victory. Then a road trip begins against a talented Pacers team with star guard Victor Oladipo back in its lineup.

After these four games, the Blazers have an easy schedule down the stretch and two head-to-head matchups at home against the Grizzlies. So, there's still hope. But there's so little margin for error right now, losing Lillard even for the next few games could push the Blazers too far back to rally.

Nipping on the Blazers' heels are the San Antonio Spurs and New Orleans Pelicans. Both of those teams have easy schedules down the stretch, just like the Blazers, and they're not dealing with the kind of injuries that are plaguing Portland.

On this week's episode of the 3-on-3 Blazers podcast, we talk about Damian Lillard being out the next few games, the development of Gary Trent Jr. and Anfernee Simons, whether criticism of CJ McCollum is justified, and make predictions for the next three games.

Have a question you'd like us to answer on the next podcast? Email us here

1. With Damian Lillard expected to miss multiple games, the Blazers will look to Gary Trent Jr. and Anfernee Simons to take on larger roles while Lillard is out. Which player is better equipped to step into a larger role right now, and which player has higher upside going forward?

Orlando: The tough part is the Blazers need both of them to take on larger roles while Lillard is out. Terry Stotts will have to ride the hot hand and find ways to get them involved. Through the entire season, Trent has been the more efficient player. He provides energy, defense and can knock down the open shot. The Blazers need him to maintain that during this stretch of games without Lillard. Trent is the safe pick on this question. We all know Anfernee Simons has the potential to get buckets and can go off at any moment. When his shot is falling, he is a dangerous scorer who can create for himself. He's shooting the ball at a ridiculous clip right now. Over the Blazers' past 10 games, Simons has connected on 52% of his threes and 49% from the field. The home run is with Simons, but the risk is a few strikeouts if Lillard is gone for an extended period of time.

Jared: For as long as Lillard is out, I think Gary Trent Jr. is better equipped this season to excel alongside CJ McCollum. Aside from his recent hot streak, it makes sense to shift McCollum over to point guard and let Trent Jr. play shooting guard. Trent Jr. is a better defender than Simons. He's also a superior spot-up shooter so he'll help space the floor more effectively with players like McCollum, Anthony and Whiteside, who need that space. Trent Jr. is a prolific spot-up shooter. Almost 40% of his offensive plays are spot-ups and he scores 1.24 points per possession, which ranks in the 92nd percentile. Simons spots up less (24% of his offensive plays) and is less effective (0.89 points per possession, which ranks in the 34th percentile. Simons is effective as the ball handler in the pick and roll (0.94 points per possession, which ranks in the 74th percentile), so he's better suited with the ball in his hands in the second unit with Trent Jr. or McCollum (85th percentile as a spot-up shooter) alongside him. I think Simons still has more long-term upside, but Trent has closed the gap quickly, which is one of the more positive developments this season.

Nate: I'm trying to put myself in the mindset of the Blazers, which is to make a late season push to make the playoffs. From that perspective, I would move CJ McCollum to point guard and start Gary Trent Jr. at shooting guard while Lillard is out. In the 2020 calendar year, Trent Jr. has shot 40% on 3-pointers and been a more efficient offensive player than Simons. He gives the Blazers a better chance of winning games today. As for which player has a higher upside moving forward, it's still undoubtedly Simons. Trent Jr. has shown potential to be a valuable role player moving forward. But I still believe Simons can become a CJ McCollum-type scorer in the league. He's had rough streaks this season, but we must remember this is the first time the 20-year-old has had consistent NBA minutes. He's shown flashes of his potential, including when he dropped 22 points in Portland's loss to Memphis right before the All-Star break. If the Blazers weren't so focused on a playoff push, I would say start Simons and let him get as much playing time as possible. But that's not where the team's mindset is right now, so start Trent Jr.

2. There's been an uptick in criticism of CJ McCollum lately, with Blazers fans and media saying he hasn't shown improvement and isn't doing enough to help the team this season. Are those criticisms fair?

Nate: This is all about perspective. If you're like Jared, who once again believed McCollum would take a step forward this season, then you should be disappointed. But if you accept McCollum for what he is, a solid secondary scorer who can sometimes carry a team's offense, then the criticisms aren't fair. After taking a shot at Jared, I'm now going to give him credit. He once said in a podcast that McCollum is a "glorified Lou Williams," in reference to the Clippers' sixth man. At the time, I thought that was a critical take of McCollum, but I’ve come to believe that it was an accurate assessment. McCollum, at least in Rip City, seems to have a reputation that surpasses what Blazers fans would think of Williams. But in a lot of ways, they are similar players. McCollum has been performing at that level once again this season. His numbers are consistent with what he's done each of the last two seasons. Is McCollum overpaid? That's a completely different conversation. But I think anyone being overly critical of McCollum doesn't want to accept the type of player he is and is grasping for straws to explain why the Blazers' season has been a failure.

Orlando: Absolutely, criticism is fair and he knows it comes with the territory. The Blazers need him right now, more than ever. McCollum's numbers have been OK, but not up to the expectations many had for him at the beginning of the season. The next step for him was to enter the All-Star conversation and that didn't happen. With all the injuries impacting this roster, McCollum was expected to elevate his game to what we all saw in the playoffs last season against the Nuggets. Rip City has witnessed greatness from him in the past and this team could really use that boost with 26 games left. The bar is pretty high for McCollum for most Blazers fans, so if he's not playing like it, he's going to get the criticism. This is the time when he plays his best and he's got the perfect chance to remind the doubters as the team makes a push towards the postseason.

Nate: The Blazers are 0-3 against the Pelicans, which includes a game Lillard sat out earlier this year. Even with Lillard, I would take New Orleans. So, without him, this becomes an easy pick. Same with the Celtics. I would take Boston even if Lillard was healthy. Without Lillard, which appears likely, this is a no-brainer. Now, to the Pistons. I'm looking for a reason to pick the Blazers to go 0-3 this week because I'm fairly certain Orlando and Jared have picked them to go 1-2. But I can't. If you can name more than three players on the Pistons, kudos to you. I'll take Portland to win an ugly game at home.

Orlando: The Pelicans have the Blazers number this season and without Lillard, it's hard to see this game going any other way. The Blazers should get a much-needed win against a Pistons team that has lost five of its last six and 10 of its last 12. This week finishes up with a loss against the Celtics. I'm assuming Lillard is out, so this is a 1-2 type of week.

Jared: I want to pick the Blazers to beat the Pelicans. I have all these arguments swimming around in my head: Portland will be rejuvenated; it's hard to beat a team four times in a row; the Blazers are due. But I can't do it without Lillard. The Celtics are one of the best teams in the NBA. Even if Lillard was playing, it would be a stretch to pick Portland to win that game. I'll take Boston to win that one. But I do think Portland will take care of Detroit. Dame or no Dame, the Blazers are a better team than the Pistons. So give me a 1-2 week. I wanted to go 2-1 but I couldn't find the logic to make it happen. Get well soon, Dame.