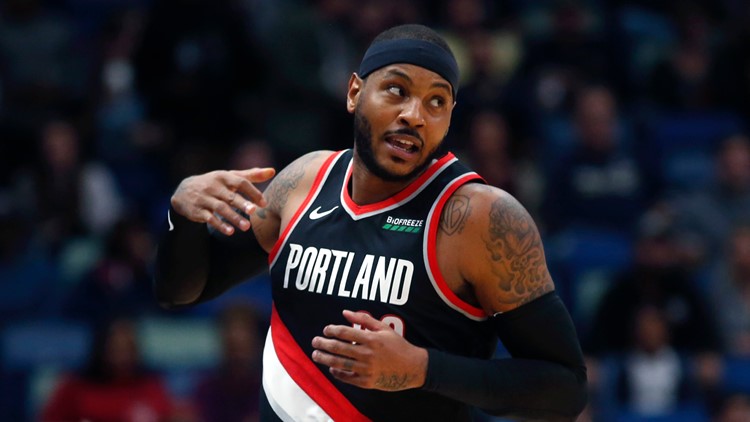 PORTLAND, Ore. — Carmelo Anthony had his best game with the Portland Trail Blazers on Monday night, and even though his 12-year-old son wasn't in the arena, he still got to share a special moment with his father.

Anthony had a season-high 25 points and eight rebounds to help the Blazers snap a four-game losing streak with a 117-94 win against the Chicago Bulls. He also moved past Alex English into 18th place on the NBA's list of all-time leading scorers.

His wife, actress La La Anthony, was in attendance at the game. Early in the fourth quarter, Anthony hit a 3-pointer to pass English with 25,615 career points. During the next timeout, La La Anthony called their son, Kiyan, via FaceTime.

La La Anthony was standing near the court and held up her phone so Anthony and his son could see each other. Anthony looked up, saw Kiyan's face and gave him a salute.

"My son always wants to feel like he's here," La La Anthony told ESPN. "He misses his dad a lot. I was filming up the block, so I came here and just wanted my son to feel like he was a part of the moment. I FaceTimed him so he could see his dad, and he just was excited because his dad had such a great game tonight."

She added: "Who wouldn’t want to see this? It's amazing and exactly how it should be."

Anthony has credited his wife with keeping him motivated as he waited more than a year for an NBA team to give him another chance.

RELATED: 'He'll make his mark on this team': Carmelo Anthony's impact on the Portland Trail Blazers

Anthony is averaging 16 points through four games with the Blazers and shooting 39.1% on almost six 3-point attempts per game. "I'm starting to get my feel and my flow back," Anthony said after Monday's game.

Anthony has also had an impact in the locker room. It's evident that the players are excited to play with him and see him back in the NBA. After Anthony hit his third 3-pointer of the game in the fourth quarter, watch how giddy Damian Lillard is as he cheers wildly from the bench.

It wasn't just his teammates who were giddy. After Anthony was taken out in the fourth quarter because victory was in hand, fans at the game chanted, "We want Melo!"

PODCAST: Can Blazers fans stay Melo as the losses mount?