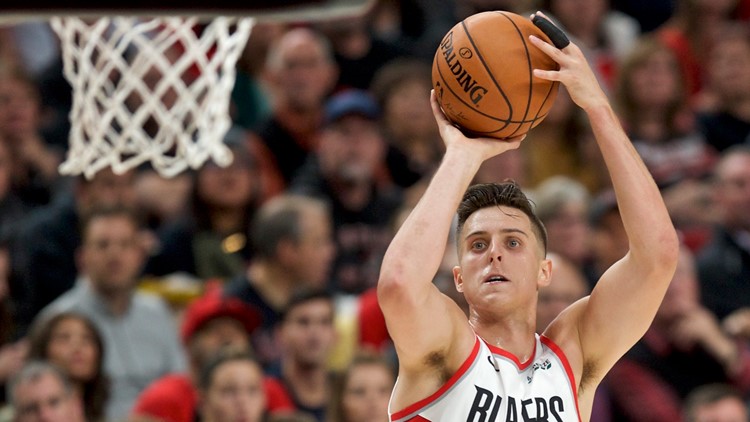 Can the Blazers stay afloat while Zach Collins is out?

PORTLAND, Ore. — The status of Zach Collins' left shoulder is the biggest question mark for the Portland Trail Blazers in this young season.

Portland's starting power forward dislocated the shoulder in the Blazers' win against the Mavericks. He had an MRI on Monday, but the Blazers didn't say what the results revealed. Head coach Terry Stotts would only say that Collins would be re-evaluated by team doctors once the Blazers are back in Portland.

Through the first three games, Collins looked ready to assume the larger role the Blazers entrusted him with this season. He was averaging career highs in minutes (28.7), points (9.0), assists (2.0), field goal percentage (47.4%) and 3-point percentage (42.9%). Collins was an important part of the Blazers' two best lineups, lining up at power forward next to Hassan Whiteside in Portland starting five, and sliding over to center in the Blazers' small-ball unit. When Collins has been on the court, the Blazers have outscored opponents by 13.1 points per 100 possessions, the highest net rating on the team.

On this week's episode of the 3-on-3 Blazers podcast, we discuss the outlook for Collins and what the Blazers can do to make up for his absence, debate whether Portland should be shooting more 3-pointers, and make predictions for the next three games.

1. Are the Blazers equipped to handle the absence of Zach Collins if he misses an extended period of time? What are their options?

Nate: They can if his injury only keeps him out days or a couple weeks as opposed to a month or more. Based on reports, I think Blazers fans have reason to be hopeful it’s going to be the former, which is good. My biggest concern going into the season was Collins and the lack of depth in the frontcourt behind him and Whiteside. In the small sample size Collins has played this year, he’s  been exactly what the Blazers hoped for. He has the best net rating of anyone on the team. His versatility to play in the post and extend to the perimeter is something the Blazers missed in their loss against the Spurs. Anthony Tolliver doesn’t present that skill set and neither does Skal Labissiere, who has been a pleasant surprise to start the season. Simply put, they don’t have anyone who can replace him for an extended time. We’ve already seen the Blazers are going to be in a lot of close games against a lot of competitive teams in the Western Conference. They can’t let wins slip out of their grasp this season, so they need Collins to return as soon as possible.

RELATED: Blazers' Zach Collins has MRI on shoulder, will miss at least next two games

Jared: I'm not as hopeful as Nate about how long Collins will be out. The fact that the Blazers didn't put a timetable on his return after Monday's MRI and wouldn't say anything about what the test showed makes me nervous. If the MRI came back clean, why would the Blazers want their own doctors to take a look at it? If Collins is out for a significant stretch, I think the Blazers will be OK. They still have Damian Lillard, after all. But it will throw a wrench in Portland's big-man rotations. Hassan Whiteside does a lot of things well, but he's not good at switching out on the perimeter. When teams go small against Portland, or have big men who can stretch the court, it might be hard to keep Whiteside in the game. Skal Labissiere is the only other healthy center on the roster. He's had a nice start to the season. He's rebounding the ball well and has shown something on offense. But his defensive fundamentals are lacking, so he's not a good option when teams go small. That means Portland will need to rely heavily on Anthony Tolliver to replace most of Collins' minutes as the starting power forward and as the center in small-ball lineups. Tolliver has had a bad start to the season, but I think he'll be OK. I think he'll be better playing alongside the Blazers' starters than with the reserves. He's a good 3-point shooter who can stretch the court, he's an underrated defender, and as a veteran, he'll be in the right place and won't make a lot of mistakes.

Orlando: We talked all preseason how depth is one of the greatest strengths of this team. From Olshey to Lillard, they called this the deepest roster in years. Well, it is going to be put to the test right out of the gate. Your starting forward is OUT for the time being. In three games, Zach Collins averaged 9.0 points and 4.0 rebounds in 29 minutes per game. The Blazers should be able to survive this, but someone has to step up in his absence. Anthony Tolliver got the start in San Antonio, that allowed Coach Stotts to keep a similar rotation in tact. Tolliver didn’t shoot well, but ate up all those minutes to go along with five points and 10 boards. If one more of his shots falls, it may have been a different result. This also gives Stotts a chance to really mix it up. They could go "small" for longer periods of time and have Mario Hezonja out there at the four. They could also stay "big" out there with Skal Labissiere, who is doing the most with the opportunities he's been given. He had 10 and 6 in 13 minutes versus the Spurs and he had 8 and 6 in 11 minutes against the Nuggets. The Blazers have options if Collins is out for an extended amount of time.

Jared: I think the Blazers should shoot more 3-pointers. A team with this many good outside shooters should be letting it fly. They don't need to be the Rockets, but they also shouldn't be near the bottom of the league in attempts. I'm going to single out three players who should be putting up more 3-point shots. CJ McCollum's volume is way down, from 6.4 last season to 4.5. Rodney Hood is averaging more attempts than last season, but almost three fewer per game than his last season in Utah. Kent Bazemore is averaging nearly two fewer attempts per game than the past two seasons, despite playing about the same amount of minutes. If each of those players matched their career highs for 3-point attempts, the Blazers would be shooting 6.3 more 3-pointers per game, which would put them at 34.6 per contest, which would rank in the top half of the NBA. That's where Portland should be.

Orlando: We got shoooterrrssss! Let 'em fly, am I right? This is a game-by-game situation. Against Dallas, they were dropping and they only took 22 shots from long range and hit nine of them. You’ll take that and ask for more. Flip the script and look at the San Antonio game. They took 11 more threes and had one more make to show for it. They couldn’t buy a bucket for most of the second half. In that scenario I wanted to see them attack the paint and get to the line. So are they making threes? Are they getting good looks? If not, I don't want to see them throwing up bricks. They have enough talent to not have to live and die by the three.

RELATED: NBA power rankings: The Blazers' defense is a work in progress

Nate: The 3-point shot is the great equalizer and the Blazers saw that in their season-opening loss against the Nuggets. For that reason, my answer should be an automatic yes. And while I’m leaning toward yes, it’s not something I think is a big area of concern right now for the Blazers. The last two seasons Portland averaged 30 3-point attempts and 28 3-point attempts, respectively. You could argue that was a reasonable number because they didn’t have the personnel to fire as many treys as some other teams. But this year’s team is supposed to be different. With Hood, Bazemore and Simons alongside Lillard and McCollum, 3-point shooting was expected to be an area of improvement. But it hasn’t been. Portland is only making an average of 9 3-pointers per game. That’s 32% shooting from beyond the arc. I expect that percentage to go up, but I don’t expect more attempts to be an immediate area of focus for the Blazers.

3. The Blazers play three games between now and our next podcast, Wednesday at the Oklahoma City Thunder, Saturday vs. the Philadelphia 76ers, and Monday at the Golden State Warriors. Which games do the Blazers win and which do they lose?

Orlando: These picks were tougher to make this week. The Blazers should beat OKC. I struggle with the next two games. I'm going to say Portland plays its best game so far and beats Philadelphia at home. Golden State is off to a disappointing start, a team that has gotten the better of the Blazers. This is a chance to take one on the road. Big week, Blazers go 3-0.

Nate: Like our picks last week, I’m going to say Portland goes 2-1. I think they finish off a strong road trip by beating Oklahoma City. I think it will be close like all the games on this trip, but in the end Portland has more talent than the Thunder. I can’t believe I’m writing this, but I think the Blazers start the season 0-2 at the Moda Center. To me, Philadelphia is the favorite to win the Eastern Conference. So, I’m going to say they pick up an impressive road victory. Blazers win big at Golden State. I’m already done with the Warriors. I can’t believe I thought they could win the championship again in our season preview. Easily my worst pick in the three years we’ve been doing this podcast.

Jared: The Blazers will beat the Thunder, who have lost three of their first four games. Shai Gilgeous-Alexander is a rising star and Danilo Gallinari can be dangerous, but they don't have a lot of depth. The 76ers are 3-0 and looked great on opening night against the Celtics. They had to scratch and claw to beat a bad Pistons team and a good Hawks team on the road. The 76ers are one of the best teams in the NBA, and I do worry about how many stretch big men they employ, but I'll give the nod to the Blazers and pick them to establish a little home-court cred with a win against the 76ers. I have a lot of questions about the Warriors, mainly their ability to defend. They have the worst defense in the league and it's not close. Portland picks up a win in San Francisco (that sounds weird).