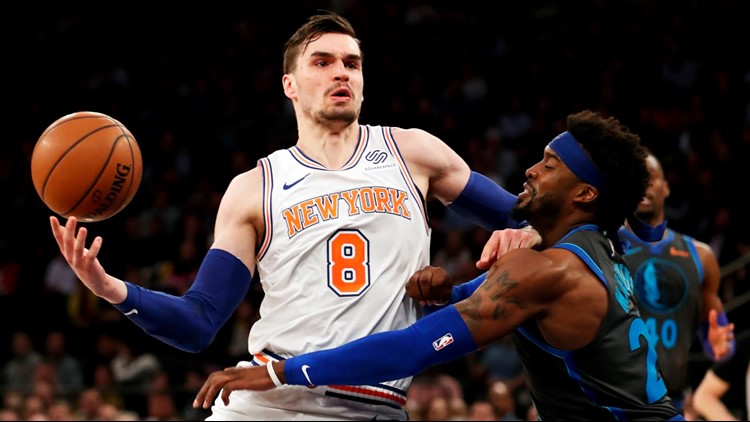 Four seasons ago, Hezonja was drafted fifth overall and was the second-rated wing in his draft class. Now he gets a chance to prove himself in Portland.
Author: Jared Cowley (KGW)
Published: 9:36 PM PDT June 30, 2019
Updated: 10:44 AM PDT July 3, 2019

The contract is for two seasons, but the second season is a player option.

Hezonja, 24, is from Croatia. He was selected with the fifth overall pick in the 2015 NBA draft by the Orlando Magic. Last offseason, the Blazers were close to signing him but he opted to join the New York Knicks instead.

"Mario is a prodigiously talented player with a high ceiling and a bright future," Portland Trail Blazers president of basketball operations Neil Olshey said. "He will have a chance to contribute immediately while we work to accelerate his development."

Hezonja will wear No. 44 for the Trail Blazers.

When Hezonja came into the league, he was billed as a sharp-shooting, do-it-all wing. He signed with Barcelona in 2012 as a 17-year-old and in his final season with the EuroLeague club, he averaged 16.5 points and shot 38.2% from 3.

He was ranked as the seventh overall player in the 2015 draft class by ESPN. Draft analyst Jay Bilas praised his athleticism, competitive spirit and perimeter shooting, adding that he is "athletic enough and competitive enough to be a very good defender in the NBA."

When asked to provide the downside for Hezonja, Bilas wrote, "Not sure there is a downside. The question is only how good, because he will not fail in the NBA."

Hezonja didn't live up to the high expectations of a Top 5 draft pick in Orlando, though, never averaging more than 9.6 points per game and never shooting better than 34.9% from 3.

Richie Adubato, the radio analyst for the Orlando Magic, told the New York Post last season that he believed with the right coaching and tutelage, Hezonja could still fulfill his potential.

"A coach has to get the most out of him," Adubato said. "[They've] got to spend a lot of time with him in the film room. ... That's something that would really help. He's got the talent and desire. I think he's going to be real good. I think it's going to take a couple of years."

Hezonja has definitely had stretches where he's looked the part of a top draft selection. Two seasons ago in Orlando, he was moved into the starting lineup for eight games and responded by averaging 13.6 points, 4.8 rebounds, 1.4 steals and shooting 47.1% from the field and 39.5% from the 3-point line. The Magic were losing though, and Hezonja was moved back to the bench, where his production tailed off as his minutes decreased.

His splits weren't as pronounced last season in New York, because he was limited to about 20 minutes per game whether he was starting or coming off the bench. There was an interesting stretch late in the season, when out of necessity, the Knicks started Hezonja at point guard and let him run the team. During that three-game stretch — and a small sample-size disclaimer applies here — he averaged 25.0 points, 10.7 rebounds, 7.0 assists and 1.4 steals in 37 minutes per game.

At the very least, Hezonja has shown flashes of potential in his first four seasons in the league. And for a two-year minimum deal, this is an intriguing low-risk, high-reward signing for the Blazers.

Enes Kanter and Seth Curry are unrestricted free agents. The Blazers don't have Bird rights on either player, and having used the midlevel exception to sign Hood, the Blazers' options for retaining either Kanter or Curry are almost non-existent.

The Blazers offered Jake Layman a $1.9 million qualifying offer, making him a restricted free agent, so the Blazers will have the right to match any contract offer he signs with another team.

Portland currently has 13 players on its roster. If they retain Layman, that leaves one open spot that the Blazers can fill by signing another player, most likely a center, to a minimum contract. The Blazers could also make a trade before the season begins.