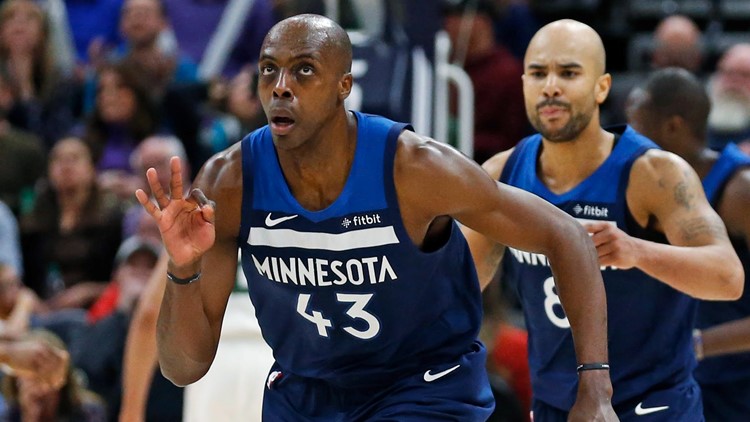 Photo by: Rick Bowmer
Minnesota Timberwolves forward Anthony Tolliver (43) celebrates after scoring a 3-pointer against the Utah Jazz during the second half of an NBA basketball game Friday, Jan. 25, 2019, in Salt Lake City.

Blazers get veteran leadership, outside shooting with signing of Anthony Tolliver

PORTLAND, Ore. — Anthony Tolliver, a veteran power forward with a good outside shot, officially signed with the Portland Trail Blazers on Wednesday.

The Blazers will introduce Tolliver in a press conference Wednesday morning. Watch it live here.

Tolliver, 34, agreed to a one-year, $2.6 million minimum contract with Portland. Though Tolliver will be paid $2.6 million, the Blazers will have a cap hit of just $1.62 million (see author's note at the bottom of this article for an explanation of the discrepancy).

Tolliver is an 11-year veteran who has played for nine teams, including a brief two-game stint with Portland in 2009. He's known primarily for two things: his veteran leadership and positive locker room presence, and his outside shooting. Tolliver is a 37.6% career 3-point shooter.

"Anthony is a consummate professional with an elite skill that will translate immediately into our system while providing leadership in our locker room," Portland Trail Blazers president of basketball operations Neil Olshey said.

Tolliver will wear No. 43 for the Blazers. Jason Quick of The Athletic reported that Tolliver is the first player to wear that number since Mychal THompson in the 1985-86 season.

Last season, Tolliver played 65 games with the Minnesota Timberwolves, averaging 5.0 points and 2.7 rebounds while shooting 37.7% from the 3-point line in 16.6 minutes per game.

With the signing of Tolliver, the Blazers now have 13 players on their roster for the 2019-20 season. If Portland brings back restricted free agent Jake Layman, that makes 14. Portland may still be in the market for a backup point guard or backup center to fill one of its final two roster spots.

Author's note: The NBA's minimum salary is based on a player's years of experience. The longer a player is in the league, the larger amount he's paid on a minimum contract. But to incentivize teams to sign veteran players (any player with three or more years in the league), the NBA reimburses clubs for part of his salary, any amount above the minimum salary for a two-year veteran. The player's full salary does not count against the salary cap. This distinction applies only to one-year contracts.