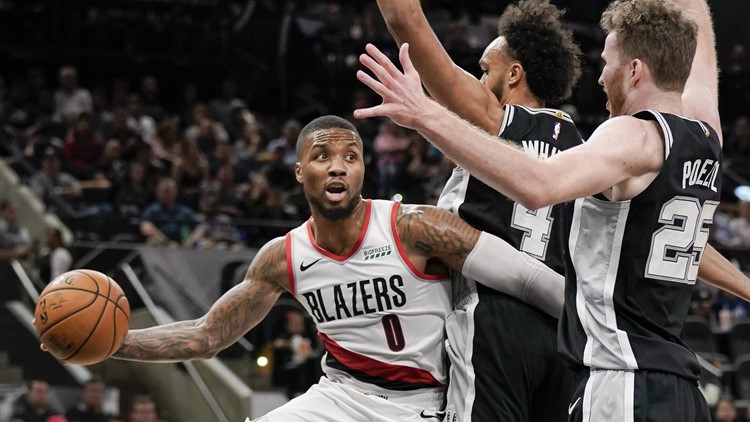 Photo by: AP
Portland Trail Blazers' Damian Lillard (0) looks to pass as he is defended by San Antonio Spurs' Jakob Poeltl (25) and Derrick White during the first half of an NBA basketball game, Monday, Oct. 28, 2019, in San Antonio.

Portland point guard Damian Lillard had 28 points, including 18 in the fourth quarter. Lillard's 3-pointer from the right corner bounced in and out as time expired.

Derrick White scored 21 points, LaMarcus Aldridge had 15 and Bryn Forbes 14 as the Spurs capped a three-game homestand to open the season.

The Spurs seemed poised for a comfortable win after narrow victories against New York and Washington, but nearly let the game get away by closing out the contest as sloppily as they opened.

Portland went on an 18-2 run, starting midway through the fourth quarter, that was capped by a pair of 3s by Lillard, closing within 107-104 with 1:57 remaining. A dunk by Lillard cut the margin to a point, 109-108, with 1:10 left. Lillard and Anthony Tolliver missed consecutive 3-point attempts with the Blazers trailing 113-100. DeRozan missed a pair of free throws, setting up Lillard's final shot.

San Antonio outscored Portland 30-27 in the third quarter after scoring just 19 points in the first period.

DeRozan's baseline drive and layup on Rodney Hood gave the Spurs their first lead at 59-58 with 8:44 remaining in the third. DeRozan has struggled offensively at the start of the season, shooting 41 percent. He was 10 for 16 on a series of hard drives to the basket.

Blazers wing Kent Bazemore, who primarily defended DeRozan, fouled out with 6:27 remaining in the game.

The Trail Blazers made three consecutive 3-pointers to open the game and rolled to a 23-4 lead midway through the first. The Spurs missed four shots and had four turnovers, going scoreless for four minutes following Aldridge's 14-foot jumper at 9:32.

Portland finished 10 for 33 from 3-point range.

Hood finished with 11 points and Skal Labissiere and Anfernee Simons had 10 points each for the Trail Blazers.

Blazers: Portland had an 11-man roster available, but coach Terry Stotts opted not to play Nassir Little or Gary Trent Jr. ... Former Spurs center Pau Gasol has not played this season for the Blazers as he continues to rehabilitate from left foot surgery in May. ... Bazemore finished with three points and three rebounds in 24 minutes before fouling out.

Spurs: San Antonio coach Gregg Popovich said Dejounte Murray's minutes will be restricted after he missed last season following right ACL surgery in July 2018. Murray will not play in back-to-back games and will be limited to about five minutes per quarter. Murray had seven points and eight assists in 22 minutes against the Blazers. ... San Antonio will play on the road for the first time this season, taking on former Spurs forward Kawhi Leonard and the Clippers in Los Angeles on Thursday.

RELATED: Blazers' Zach Collins has MRI on shoulder, will miss at least next two games

RELATED: NBA power rankings: The Blazers' defense is a work in progress